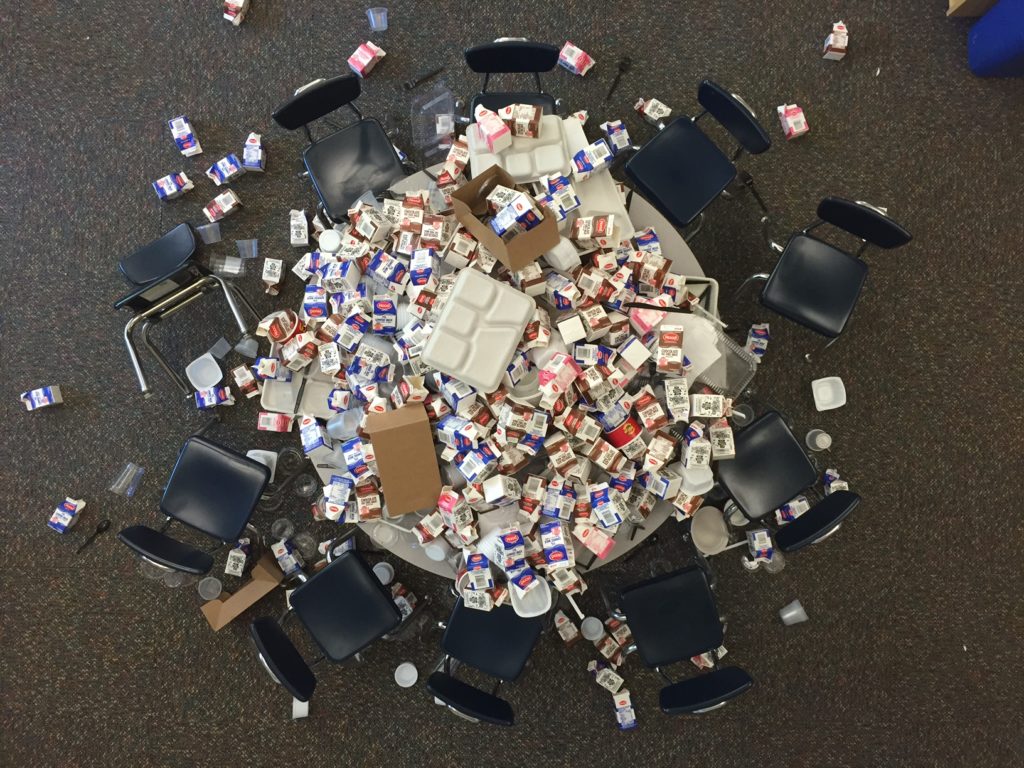 Molly de St Andre
A Muddy Brook Regional Elementary School kindergarten class collected cafeteria trash for 18 days and saved it before calculating how much of this trash the school generates every year. Here is 18 days of trash in Jack Curletti’s kindergarten class.

Great Barrington — Their teacher read them “The Lorax” by Dr. Seuss, then introduced them to a hands-on math problem that resulted in shocking numbers.

It all happened in Jack Curletti’s kindergarten class last spring at Muddy Brook Regional Elementary School. Eighteen days of paper and plastic cafeteria trash generated by this kindergarten class alone was cleaned and saved. The amount of disposable place settings was multiplied by 180 school days. To that was added that of the other classes, assuming they disposed of roughly the same amount.

The results of this trash math were so mind-boggling that Curletti and Molly de St Andre, a designer and teacher for the deaf at the school, along with filmmaker Sam Handel, made a three-minute film about it. De St Andre’s husband, Aurel, and Substation Studio owner Robbie Baier also worked on the project. 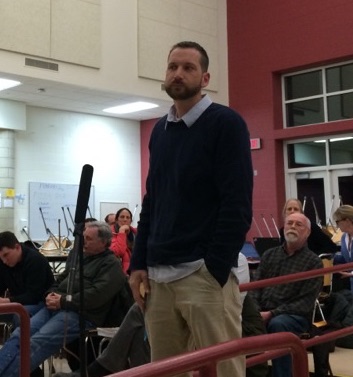 “Where Is All This Going?” was shown at Fuel Coffee Shop on Main Street at 7 p.m. Friday (October 14), where de St Andre and Curletti were on hand for a discussion. Click here to watch the film on Youtube.

“We throw away enough silverware that, if stacked end to end from the ground up, would measure 33,000 feet — the cruising altitude of an airplane,” de St Andre wrote in an email. “We throw away enough lidded cups that, if you stacked them on top of each other, you would have a tower nine times the height of the Empire State Building. And our milk cartons lying side by side would cover an entire football field.”

Multiply that by the middle and high schools, and it’s enough to make you want to hide under the covers until the world returns to its predisposable past.

It turns out that every breakfast and lunch in the cafeteria is served on single-use plastic or paper and, at the end, it’s all dumped into the trash. While all of it is recyclable, none of it is recycled, de St Andre further wrote.

“Though this aspect of it is very upsetting in itself, we feel that recycling should only be an interim solution, since every single disposable item could be replaced with a reusable, washable item and thus would reduce the trash to zero.”

Curletti said the idea was born out of ways to help the community and then noting the disconnect between environmental awareness while continuing to dump heaps of trash and look the other away.

“We wanted to see what it actually looks like,” he said, and to think about how it translates beyond Muddy Brook to the rest of the world.

Curletti showed the collected trash to teachers and administrators. Everyone was shocked. Curletti said it made the most sense to switch to “reusable everything,” but also says he’s no “expert” and that there are budget constraints that the school district is constantly juggling and ringing its hands over.

De St Andre wrote that there are savings to be had by washing reusable tableware. “Districts who have reversed this practice have started saving money in less than one year.”

Berkshire Hills Regional School District Superintendent Peter Dillon said the cafeteria has a staff of three, reduced from six when stainless steel flatware was still in use. He further said the district is “interested in having this conversation” and that it bolsters other things the district is doing, like using solar energy.

Yet again, it likely comes down to money, he added, which, in turn, might come down to class size or even to jobs. Money has been a big thorn in the district’s side these last few years as the school budget shoots the property tax bills up every year.

“Its zero-sum game,” he said. “If you want to invest in using less plastic, then you need to invest in more staff. If you’re investing in more staff, then what are your choices? Is it a bigger allocation to towns that increases peoples’ taxes?”

He does want to look into different options, however, and thinks the awareness is important.

“The luxury of being the filmmaker is that they don’t have to solve the problems, they have to bring up the issues,” he noted.

And yet again, there’s a familiar and painful squeeze between ideals and reality.

Curletti said he knows this, but also pointed out that this colossal waste is happening in the same community that is trying to stop General Electric from polluting even more of the Berkshires.

“It’s tricky,” he said, “but we have to spend our money based on our morals.”