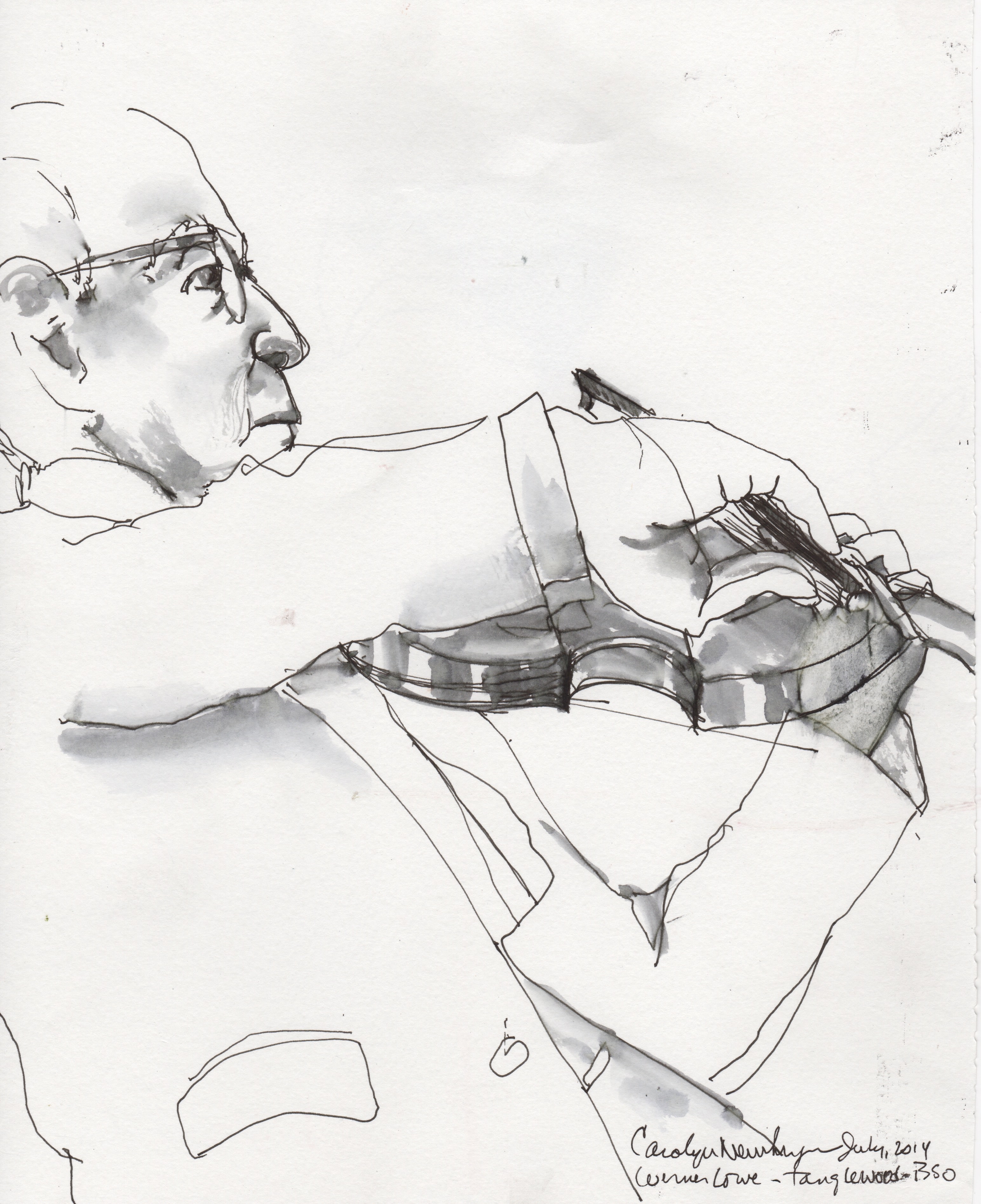 In keeping with an exquisite summer evening in the Berkshires, the Boston Symphony Orchestra, under the baton of Andris Nelsons, brought down from the stars a favorite pianist, Emanuel Ax, to reprise his iconic Mozart Piano Concerto No. 22 in E-flat, K.482, and elevated two of its own virtuosos—Richard Sebring, French horn, and Thomas Rolfs, trumpet—to lift the Mahler Symphony No. 5 to heights of beauty, apocalyptic visions of heaven and hell, and profound sadness.

After three days of inauguration and celebration of the marvelous new Linde Center for Music and Learning, we felt settled as we sat down in the huge Shed with its stately quiet, murmurs of anticipation in the audience and the warmups on the stage. And there, adding to the sense of returning home, was Malcolm Lowe, back in his concertmaster chair after a full recuperation from an injury.

The selection of the evening’s works was also fitting to the moment of new meets old, in that just prior to writing them, both Mozart and Mahler had immersed themselves in the music of Johann Sebastian Bach, the better to hone their comprehension and execution of the counterpoint of which he was and remains the supreme master.

Mozart made weekly visits to the librarian of the Viennese court, borrowing scores and taking them home; and Mahler, recuperating in a sanatorium from a surgical procedure (a much bigger deal at the turn of the 20th century than it is today) intentionally devoted his seclusion to Bach’s inspiration. (Note from the doctors: there’s no doubt that music has salutary effects on children of all ages.)

And indeed, we were blessed with a splendid example of contemporary contrapuntal creativity in Emanuel Ax’s original cadenzas. They both respected Mozart’s tonal conception and suggested the blossoming romanticism that radiated through the Mahler.

Note, dear reader, the following video of this concerto—performed by Mr. Ax with the Bavarian Radio Symphony—with his signature delicate finger work, expressive dynamics within and between the phrases, with every note carrying meaning, and his emotional expression of melodies intertwining with inner voices. In such revealing documentation, you can see it, hear it and feel it. This said, there’s nothing like experiencing these dazzling inventions in real time. With Ax and this magnificent orchestra’s expressing the beauty and emotional depth of Mozart’s oeuvre, it’s at once accessible, mystifying and, with Ax as the soloist, jaw-dropping.

At 11:52, Ax’s fabulous cadenza yields an amazing II – V – I transposition that would be comfortable in the fingers of Art Tatum (who loved to adorn the classics with chromatic cascades of these very changes, for example on his immortal treatment of Dvorak’s ‘Humoresque’), then a touching shift to minor tonality, with a delicious reprise of antecedent themes.

The Mahler Symphony No. 5 was another story. No less a virtuoso orchestral performance with a distinguished cast of soloists and profound emotional impacts, it was by contrast unsettling, bewildering and disorienting—and for some in the audience, manifestly unsatisfying. We noticed a continuous parade of departures after the Scherzo movement in Part II, a pity because, had they stayed, they would not have missed the gorgeous, accessible Adgietto, a gift of love to Mahler’s wife, Alma.

In a letter to Alma, written from Cologne after its first rehearsal, Mahler gave a clue to his concerns about conductors’ and listeners’ responses to the Scherzo:

“The scherzo is the very devil of a movement. I see it is in for a peck of troubles! Conductors for the next fifty years will all take it too fast and make nonsense of it; and the public—oh, heavens, what are they to make of this chaos of which new worlds are forever being engendered?”

As to the reception by subsequent conductors, Arturo Toscanini is quoted in the magisterial biography of Mahler by Henry-Louis de La Grange (“Gustav Mahler: A New Life Cut Short [1907-1911],” p.320):

“Toscanini had heard many reports about the former director of the Vienna Hofoper and had several times expressed his admiration for him, albeit not an admiration based on any first-hand experience. Of Mahler, he knew only his music, or, to be more precise, only one of his scores — the Fifth Symphony — on the subject of which his views were entirely negative. He had been sent a copy of the score by his brother-in-law, Enrico Polo, who was a pupil of Joachim and an admirer of Brahms, and he had read about the work’s premiere in Cologne in October 1904:

“You’ll easily be able to imagine how much joy and how much curiosity its unexpected arrival gave me. I read it immediately, or rather devoured it — but unfortunately, during this ferocious musical meal, my initial joy and curiosity gradually waned, changing in the end into a sad, very sad, hilarity. No, dear Enrico, believe me, Mahler is not a genuine artist. His music has neither personality nor genius. It is a mixture of an Italianate style à la Petrella or Leoncavallo, coupled with Tchaikovsky’s musical and instrumental bombast and a seeking after Straussian eccentricities (although boasting an opposing system) without having the brilliance of the last two. At every step you fall into something that’s not so much commonplace as trivial. Just look at this [here Toscanini copied out the first eight bars of the funeral march], this nice little march motif at which Petrella and Leoncavallo would look disdainfully . . . [which] Mahler has the shamelessness to introduce into the first movement of a symphony . . . Can you imagine a more awful piece of hack-work than this other bit that I’m copying out for you [here Toscanini transcribes the first thirteen bars of the trumpet solo at no. 7 in the first movement]? And this is coloured by whining violins and wailing woodwinds….Add to this technical difficulty and over-blown proportions, so the idea of a possible performance in Turin has thus faded.”

Conductor Simon Rattle offered a more sympathetic perspective on the Fifth in an interview in the UK journal Gramaphone (March, 2010):

“Mahler was trying to find another style in this piece. He had recently devoted himself to the study of counterpoint and he found the scoring of this piece very hard. He revised it many times. I recently conducted Tristan in Vienna and the librarian loaned me Mahler’s copy of the score for the first week of rehearsals. There were so many detailed markings – he really was the most intensely practical musician – that it was like having Mahler in the room with me.”

“I have finished my Fifth. It had to be almost completely re-orchestrated. I simply can’t understand why I was able to make such mistakes, like the merest beginner. (It is clear that all the experience I had gained in writing the first four symphonies completely let me down on this on, for a completely new style demanded a new technique.”

We picture Mahler working in his tiny cabin in his beloved woods and cannot but wonder if he mistook the trees for the forest. The absence of narrative structure; the interruptions of village dances (“landler”) with ferocious percussion and brass blasts; the incomprehensible density of much of the five-line contrapuntal development; the disorientation of gorgeous solos for horn and trumpet followed by irrelevant marches; and dramatic shifts in tonality, tempo and meter, make for a challenging listening experience.

This must have been a bear for Andris Nelsons to conduct, and he gave it his best. He attended to every detail: swept the passions into reality with magical arm, hand and finger gestures, including holding his left fist in the air and bringing it up slowly to signal rising fortissimos; eased down parallel decrescendos by bringing his hands closer and closer to his face; and the orchestra played for him brilliantly.

The spectacular and flawless display of virtuosity by the two leading soloists of the evening, French horn Richard Sebring and trumpet Thomas Rolfs, was especially gratifying. When Nelsons called on them first to stand, they received clamorous ovations, with many shouts and cheers, greater in volume than the applause that followed the end of the piece. Sebring, in an unusual and most welcome gesture, looked at Nelsons and extended his arm over the woman sitting next to him, the marvelous Rachel Childers. In the throes of his near-impossible exertion, she supported him by seamlessly and accurately picking up the same note or within the same phrase, a marvelous example of teamwork and professionalism, not to say her own virtuosity. (Notably, Childers was the only female brass player on the stage.)