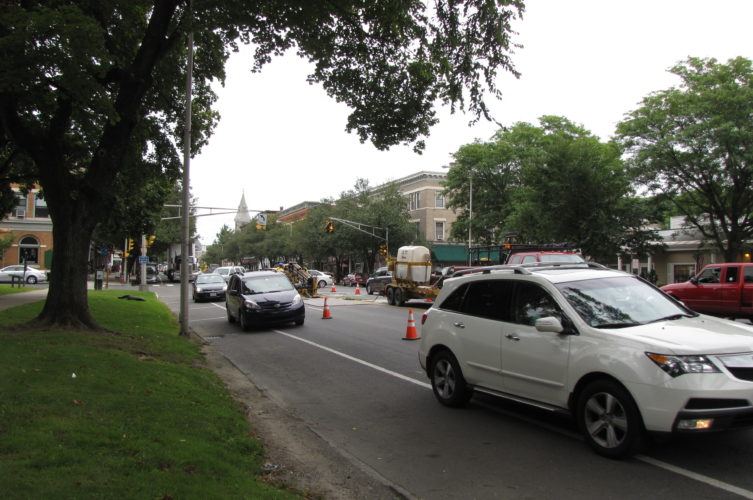 Great Barrington – It was probably a coincidence. Still, it was an odd juxtaposition of events, just going to show that as the Main Street Reconstruction Project commences, the challenge of keeping the downtown an accessible commercial district has become a critical issue for town officials.

Just as travelers through the center of town are getting a taste of what future traffic tie-ups are going to be like – one southbound lane closed in front of Town Hall and at Taconic Avenue in preparation for the installation of a storm water conduit – a line of cars backed up through downtown and south to Route 23 — the Selectboard has formally disbanded the Parking Task Force that was exploring where visitors and residents would be able to park during the impending – and now commencing – Main Street Reconstruction Project.

Task Force Chair Jennifer Clark had appeared before the board Monday (August 11) to plea for assistance in engaging the support of downtown merchants for the “Spot Saver” program whereby downtown residents and business employees would find parking outside of the downtown core, in order to free up spots for customers.

“We have identified 79 parking spots – 60 in lots and 19 along side streets – but I need more help in selling this to merchants,” she told the board. “I know it’s August, and it’s difficult for businesses to get themselves together to consider this. But we need to designate spots for tenants and employees.”

Clark said that she and her Task Force were concerned about the reception they will receive as they try to convince merchants to participate in the Spot Saver program. She cited what she termed the “arrogance” and “orneriness” of merchants who currently take up parking places downtown and move their vehicles to another downtown spot to avoid the fine for violating the 2-hour parking limit.

Town Manager Jennifer Tabakin observed, however, that commitment to the Spot Saver program from business owners and landlords was needed immediately.

“We’ve moved from the planning phase to the implementation,” she said, adding that it would appropriate for the Task Force to be dissolved. “We’ll fold the Task Force members into whatever we’re working on during the project.”

She commended the Task Force for its hard volunteer work in surveying available parking sites and preparing signs to direct visitors to available parking during the reconstruction, but she explained that as the project got into gear, decisions about day-to-day parking issues would have to be made quickly, something the Task Force could not do because open meeting laws require advance posting of meetings.

“We’ve moved from the planning stage to the implementation,” she said.

She pointed out that the town staff, with the help of volunteers, would assume responsibility for engaging with merchants to assure their cooperation, now that the Main Street Project was underway.

While work by the contractor, Maxymillian Technologies, has begun at the north and south verges of Main Street, once the work proceeds to the territory between Bridge and Cottage streets, downtown parking will be limited – although traffic flow will be maintained as Main Street and its adjacent sidewalks are completely rebuilt.

“Town representatives will take over the effort to meet with merchants,” Tabakin said. “And we’ll get the parking signs up for designated parking areas and information out. We’re doing that already.”

In other business before the Selectboard:

The board approved the hiring of attorney Rich Dohoney to represent Building Inspector Edwin May in Land Court in the matter of ruling he made against Lynn Hutchinson and Brian Schwab. May had ruled last year – and his decision has been upheld by the Zoning Board of Appeal – that Hutchinson and Schwab had violated zoning restrictions by clear cutting property on Long Pond Road adjacent to the Long Pond, the water source for Housatonic.

Schwab and Hutchinson are challenging the ZBA ruling in Land Court in Boston.

The board also advised Michelle Loubert that the town did not have jurisdiction over private cemeteries and therefore could not impose fines when graves were defiled by dogs on private property.

The board did refer the issue of dogs defecating on graves in the town cemeteries to the Cemetery Commission, with the suggestion that the commission consider an increase in the $25 fine.

This post replaces an earlier posting in order to clarify the evolving status of the Parking Task Force.