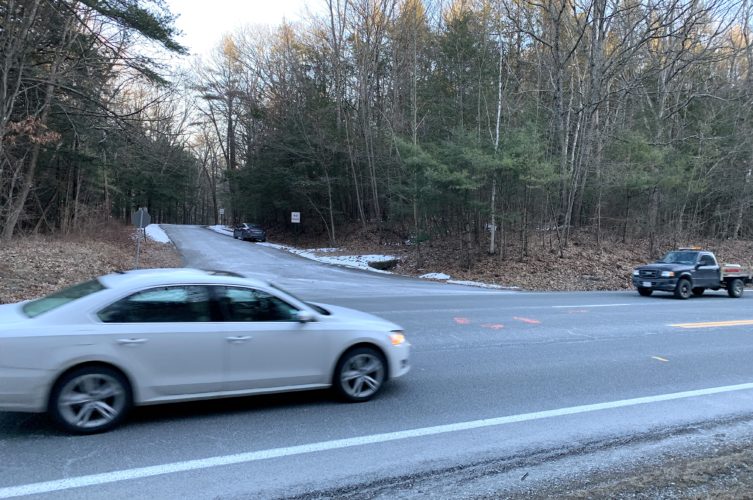 The intersection of Lovers Lane and Route 7. Photo: Terry Cowgill

GREAT BARRINGTON — The town will ask its engineers to look at corrective steps that could be taken to improve the safety of an intersection on Stockbridge Road (Route 7) that was the scene of a fatal crash in late December.

Ruth Houghton, 92, of Great Barrington, died as a result of injuries sustained in the crash. Houghton was exiting Lovers Lane onto Stockbridge Road and collided with a northbound vehicle driven by Samantha Kaye, 28, of Monterey. Kaye survived but was transported to Berkshire Medical Center.

The intersection is on a straightaway incline, just south of the Monument Mountain Reservation parking lot, where vehicles tend to drive at high rates of speed. Sightlines are limited and, when making a turn onto Route 7 from Lovers Lane, this writer can tell you from personal experience that it’s easy to misjudge the speed of oncoming vehicles.

Selectboard member Leigh Davis had asked town manager Mark Pruhenski if he would invite representatives from the state Department of Transportation to discuss the intersection and ask them if they had any thoughts on the matter.

That’s precisely what happened last Monday, Jan. 25, when the board discussed the intersection with Francisca Heming, the highway director for MassDOT’s regional office in Lenox, and Patrick Tierney, a MassDOT traffic engineer.

See video below of the Jan. 25 selectboard meeting. Fast forward to 54:30 to see the exchange with MassDOT officials:

“The concern is that there was one recent fatality there, and many near misses,” Abrahams said. “I know DOT has actual numbers, as opposed to just what we feel.”

Tierney explained that the intersection “has never been on our radar screen, as far as high-crash locations and things of that nature.” He noted that MassDOT does not keep data on near-misses.

MassDOT records indicate that, in addition to the crash that resulted in Houghton’s death, there was only one other “angle-type crash” with a possible injury at the intersection, Tierney said. He added that both State Police and the Great Barrington Police Department might have additional data.

The speed limit is 50 miles per hour and there is a northbound uphill passing lane. Heming characterized the sight distance as “appropriate for the speed limit.”

“When we went out and looked at the intersection, it didn’t rise to the level where we saw a need to take any action beyond a few signs and, of course, we’re going to keep checking it throughout the summer when the foliage comes back to make sure there’s no overgrowth or anything like that,” Tierney said.

“Sounds like you’re saying if you did have jurisdiction over this road, you wouldn’t change anything,” Abrahams replied. “You wouldn’t be closing it off or making it one-way.”

Tierney said such a decision would have an impact on the selectboard’s constituents and that MassDOT would not drive the process. Heming emphasized that the town of Great Barrington has jurisdiction over Lovers Lane because it is a town road, whereas Route 7 is a state highway.

“I know that, just from my own experience and watching people trying to navigate the intersection, that it is troublesome,” said Davis, adding that she would like to know what impact any changes to the intersection would have on residents, passersby, emergency responders, and school bus routes.

Board chairman Steve Bannon suggested getting all the “stakeholders in one room:” neighbors, officials from the Berkshire Hills Regional School District, emergency personnel, MassDOT, the town Department of Public Works (DPW), and the Great Barrington Police Department. Bannon added that a public hearing would likely be needed if the town wanted to close off access to Route 7.

DPW director Sean VanDeusen said he had already reached out to BETA, a planning and engineering group based in Rhode Island, to perform an analytical study of the intersection to determine the implications and the requirements to convert Lovers Lane into a one-way street or a dead-end road. Most recently the town paid BETA to suggest possible safety improvements to the Main Street crosswalks.

“It might be good to have them do a study so that we have criteria to operate on when we have that public meeting,” said VanDeusen, who also went through the controversial process of turning Lake Mansfield Road into a one-way drive.

Heming said she approved of having BETA do an analysis and that, even if Lovers Lane becomes a one-way road, it can still be open to two-way traffic for emergency vehicles, as is the case with Lake Mansfield Road.

“We are willing to participate in any meeting if you need us to,” Heming said.

Bannon said he favored holding a separate public meeting because a Lovers Lane input session would likely last too long to be a part of a regular selectboard meeting.

“The timeline will be driven by BETA, and Sean’s right; we need to see what our options are,” Bannon said, adding that the board would set a date soon for a public meeting on Lovers Lane.