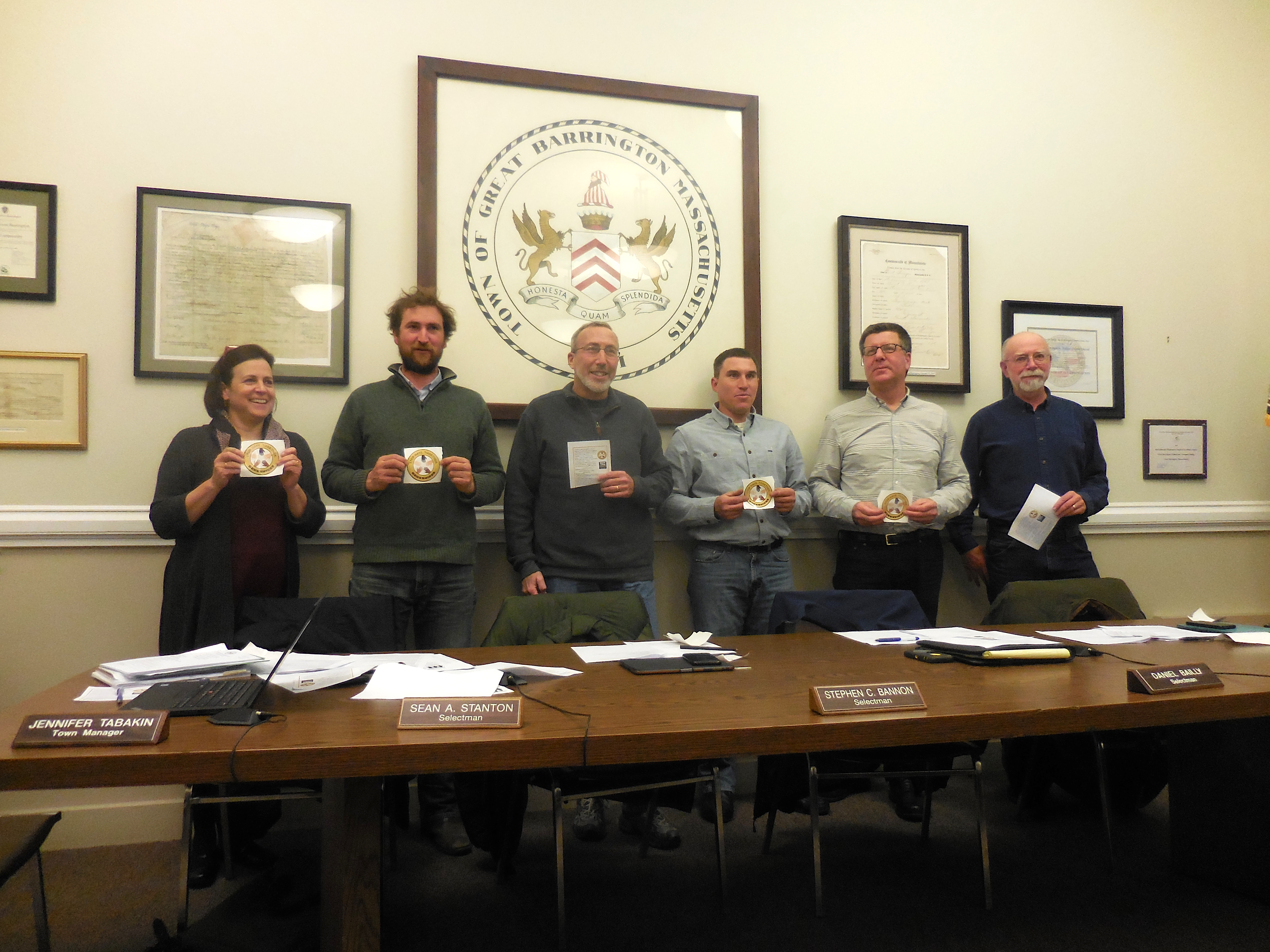 Great Barrington — The Select Board is now on record as standing against “hate based on race, religion, sexual orientation, gender identity, ethnicity or any other factor.”

That was the situation Monday night (Nov. 27) as individual selectmen signed a “Not In Our County” pledge presented to them by Multicultural BRIDGE, a Lee-based advocacy group that offers diversity programming in the Berkshires.

“The Bridge and many partners are working together on a campaign to stop hate in the Berkshires,” said Gwendolyn Hampton VanSant, who head Multicultural BRIDGE. “But really we have more of a positive spin about needing to all work together and forge a coalition to promote equity, trust and justice.”

VanSant said the Not In Our County movement was started by BRIDGE but organizations all over Berkshire County have signed on to it. It grew out of the larger Not In Our Town group, which is a national movement whose goal is to “to stop hate, address bullying, and build safe, inclusive communities for all.”

State Sen. Adam Hinds and Rep. William “Smitty” Pignatelli have also signed the pledge, as have several prominent officials in Pittsfield, including, the mayor, police chief and the entire city council, VanSant said. The Berkshire Hills Regional School Committee has recently signed on as well.

“This campaign is based off of and part of a national model which identifies and chronicles the story of the communities across the country that have proactively responded to incidents of hate,” added BRIDGE volunteer Lily Swartz. “It’s believed that we are the first county to take this on, so we think it’s really exciting and we would love your support.”

VanSant urges signees to post their pledges on social media using the hashtags #AllHandsIn and #NotInTheBerkshires. Or simply post the pledge on your refrigerator as a reminder of your commitment.

In response to unspecified “incidents that have happened in the community,” VanSant said that BRIDGE envisioned Not In Our County and has partnered with the the U.S. Department of Justice to “identify steps to build a safe and inclusive community.” The goal of Not In Our County is to get 10,000 pledges in Berkshire County.

Town Manager Jennifer Tabakin noted that a related film, Light In The Darkness, was recently shown at the Mahaiwe. The movie is a one-hour documentary about a town coming together to take action after anti-immigrant violence devastates the community.

See video trailer below of “Light In The Darkness:”

In other business, Tabakin said the town hall roof contract has been awarded. She did not know precisely when work was expected to start.

The roof is in urgent need of replacement. Water infiltration during heavy rains and snow melt is leading to rot and moisture issues. The roof and cornices need complete replacement. At the annual town meeting in May, taxpayers allocated $150,000 for the project through the Community Preservation Act.

Town officials say both the structure of the building and its distinctive historic features are in jeopardy. The project is estimated to cost $250,000, and the Town has also applied for $100,000 in state grants.

Tabakin also told the board that at the Southern Berkshire District Court, a former school on Gilmore Avenue which is owned by the town and leased to the state, work on asbestos abatement will start soon.

Floor tiles containing asbestos have to be removed and new carpet tiles installed. Tabakin said so the town “did not anticipate that level of abatement would be needed but unfortunately it is.”

In addition, the contract for the new pole barn at the transfer station has also been awarded and “unexpected work on the chimney at the Ramsdell,” the public library in Housatonic, has been completed. The emergency work “needed to be addressed immediately” because of “decay,” Tabakin said.