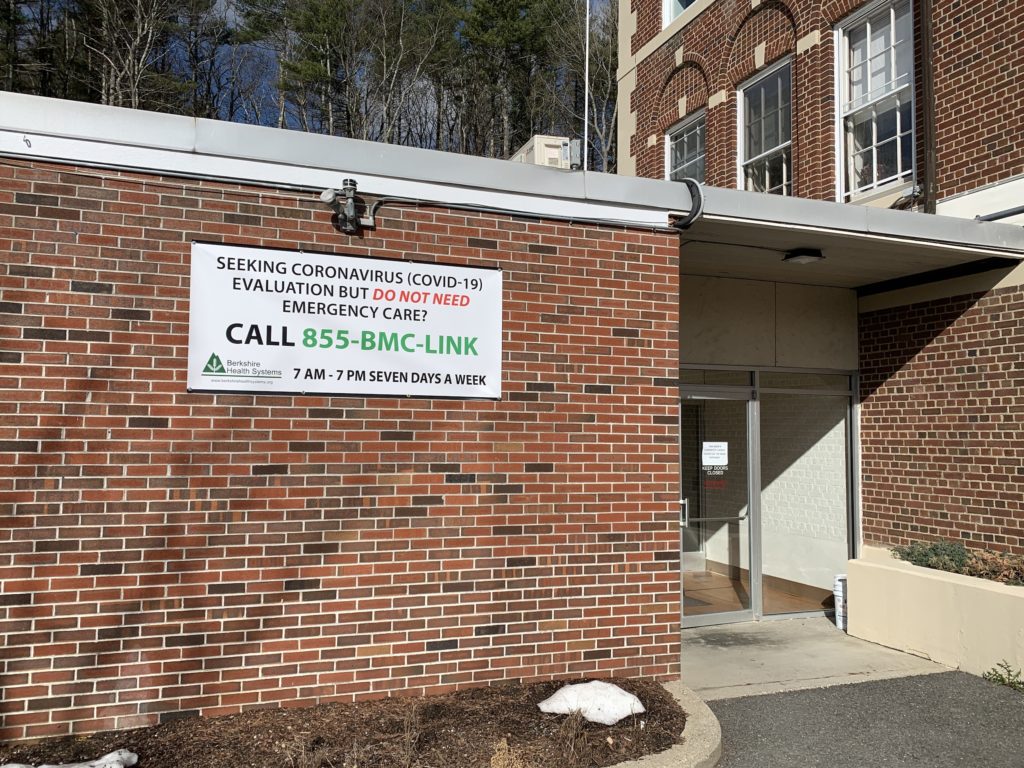 A sign at the front entrance to Fairview Hospital in Great Barrington urges arrivals to call a special Berkshire Health Systems help number staffed 12 hours a day, seven days a week. The hospital prepared for a surge in COVID-19 patients but it never happened. Photo: Terry Cowgill

Great Barrington — With the deadly COVID-19 pandemic spreading like wildfire in the U.S. and in New England, Fairview Hospital was preparing for the worst in early March. Both Fairview and its parent organization, Berkshire Health Systems, prepared for a surge in patients.

As part of its surge plan, Fairview, a 25-bed community hospital, prepared to double its capacity to 50 beds through the conversion of other spaces in the hospital into beds that could treat critically ill patients.

“We were looking at a surge plan, as we did not know how many patients we were going to get and how quickly they would come,” Dr. Adrian E. Elliot, Fairview’s chief of emergency services, told the selectboard in a coronavirus update on Monday night. “We were waiting for a surge to come, which didn’t really happen.

“At one point, I think we had more isolation beds than Mass General in our health system,” Elliot continued. “At Fairview, multiple inpatient rooms were converted into negative-pressure isolation rooms that would allow patients to be treated there and staff to be safe.”

As of early this week, there were 428 confirmed cases in Berkshire County, with 31 total deaths. As of Monday, according to the state Department of Public Health, Fairview had three confirmed or suspected hospitalized cases of COVID-19, while Berkshire Medical Center in Pittsfield had eight.

The state as a whole experienced its peak number of confirmed cases and deaths only a few days ago. As of Monday, the statewide death total stood at 3,002.

“Right now the positive test numbers seem to be on the way down — at least over the last week or two, so hopefully that’s a trend that we can keep up with,” Elliot added.

Elliot said, since the first week of March when Fairview saw its first cases of COVID-19, his team has been meeting frequently and having daily conversations with DPH to prepare for the surge that never came.

“What we really settled on was really prioritizing the expansion of surge capacity for critical patients and acute COVID patients at BMC and they moved to a huge number of ICU beds that they were never able to fill or get close to,” Elliot explained.

Fairview also opened up an annex in the hospital by taking over the cardiopulmonary gym so that lower-acute nonfever COVID-19-like patients could be treated away from those who were sicker. Fairview substantially reduced or delayed all elective or nonessential services such as rehabilitation, elective surgeries and echocardiograms, Elliot explained.

But thankfully the surge never materialized. So Elliot urged those who would normally be seeking care at Fairview to return to that practice:

“I guess the final thing I want to end on is what we’ve seen over the last, especially the last months, has been a real drop in our volume in the emergency department. We’re seeing less and less people come in, which is fine. If people don’t need to come in, that’s great, but we are seeing people come in who are sicker than they normally would have been if they were cared for earlier.

“So I’m trying to get out the message that we’re open. Patients are protected, staff are protected, you’re not going to catch COVID coming into the hospital. We have protocols in place that we are very strict with and we can treat people just the same way that we normally do.”

Elliot said BHS did not run out of important materials and equipment because staff worked hard to conserve supplies of gowns, face shields, respirators and the like. He thanked organizations and other members of the community who donated face shields and sewed reusable gowns.

Town manager Mark Pruhenski said the town has been fielding questions and complaints from residents who are concerned about hikers parking on Route 7 in order to use the trails on the Monument Mountain Reservation.

The reservation is owned by the nonprofit Trustees of Reservations, with whom Pruhenski has been in frequent contact. The trails are closed during the pandemic and the parking lot has been roped off.

There aren’t many temporary no-parking signs up because they are made of paper and they tend to get wet or blow away. Any vehicle that parks on any portion of the road will be ticketed, though if the vehicle is on the Trustees’ property, that would be a different matter.

“Our job is really not to enforce hiking on private property,” Pruhenski explained. “It’s just to enforce parking along a highway.”

Selectboard member Kate Burke said she has become concerned for the safety of walkers and runners on town roads, especially since they are out in greater numbers during the shelter-at-home orders and the pandemic shutdown.

Burke has been doing a lot of work on her front porch on Egremont Plain Road, and she sees lots of people walking and biking and is concerned for their safety because many are not obeying commonly accepted practices such as walking single-file against the traffic and cycling with it.

“It’s great that they’re getting outside,” Burke said. “I’m really concerned people will get seriously injured. I saw some really close calls this weekend, so I don’t know if there’s anything we can do beyond just reminding people.”