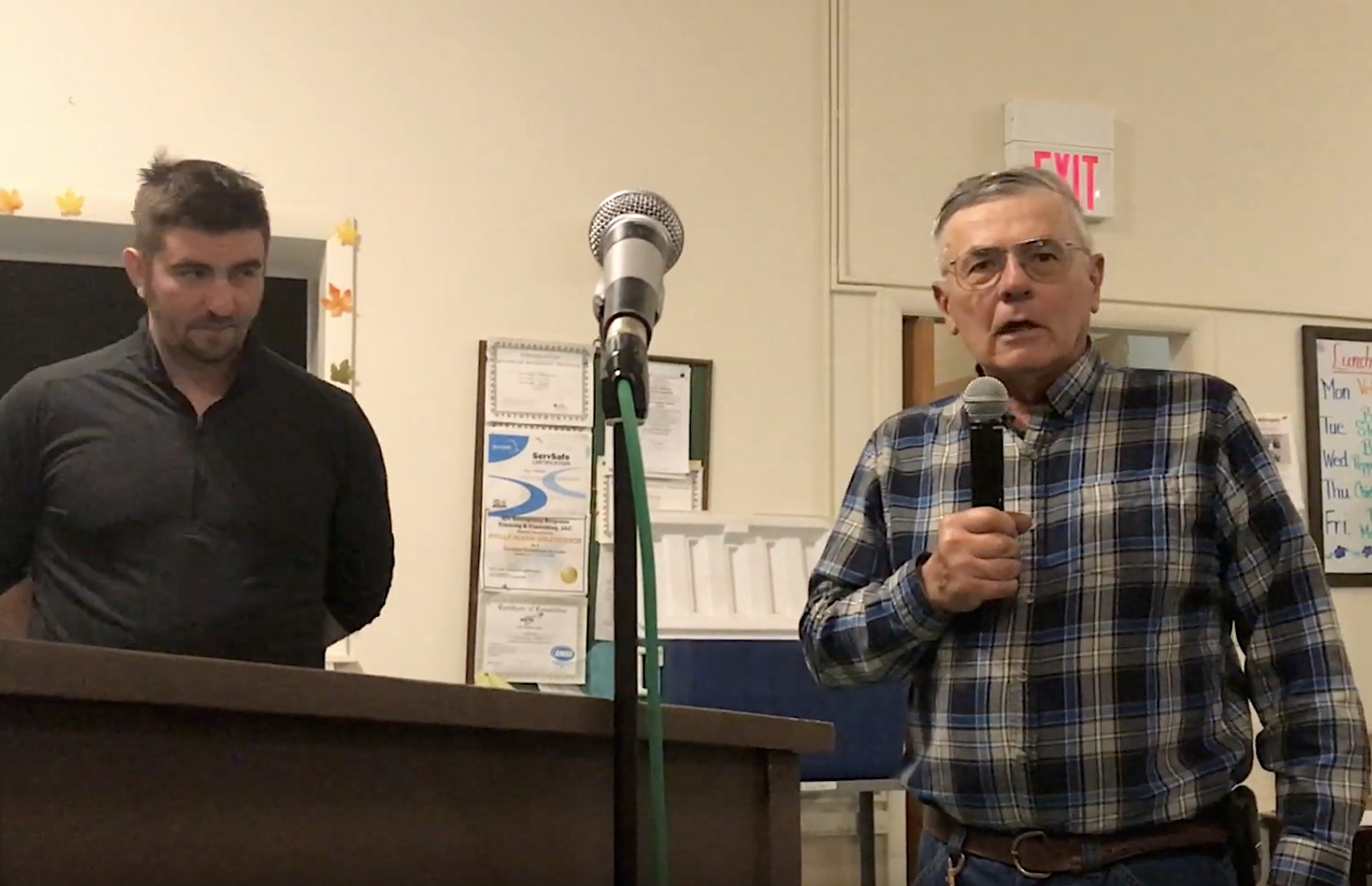 At a Nov. 13 Great Barrington Selectboard meeting, Taft Farms owner Dan Tawczynski, right, said he would be out of business by the time the Division Street bridge is replaced. Looking on is Department of Public Works chief Sean VanDeusen. Photo: Terry Cowgill

Great Barrington — Depending on which traffic alternatives the state comes up with, motorists — especially tractor trailers — driving through Great Barrington next spring could be faced with few good options for getting through town.

Town public works director Sean VanDeusen told the selectboard Wednesday night he recently spoke with officials at the state Department of Transportation about the so-called Brown Bridge, which spans the Housatonic River between State Road and the intersection with Domaney’s and the “GB” hedge. VanDeusen confirmed that a major repair is in the works for that bridge.

“They’ll be putting about 20,000 pounds of new steel underneath, as well as lead remediation, paint and work on railings on the side,” VanDeusen reported. “Work is expected to take between nine months and a year.”

VanDeusen characterized the planned work has having “a significant impact on the town.” VanDeusen said he and fire Chief Charlie Burger have requested a traffic plan from MassDOT “just to see what we’re going to be dealing with.”

VanDeusen was asked if one lane of the bridge would remain open. He said he would not know until the state submits a plan for how to configure the bridge for partial closing or, in a worst-case scenario, map out a detour for full closure.

Whether one lane of the Brown Bridge is closed during construction or whether it is shut down altogether, the construction will be a major disruption to traffic, especially considering the fact that the town-owned Division Street bridge was closed by the state in the second week of September. And the Cottage Street bridge was closed this spring. Click here for a full explanation of all three bridges and recent traffic-related concerns.

Dan Tawczynski, who owns Taft Farms at the intersection of Division Street and Route 183, asked for a timeline for the replacement of the Division Street bridge, the closure of which has severely impacted his business.

VanDeusen said permitting will take at least a year and construction would take another year or two, “so you’re looking at two to three years minimum.”

“I’ll be out of business,” Tawczynski said. “That bridge is killing us. And when summer comes and they close down even one lane on that Brown Bridge, if you’re coming through with a 53-footer, where do you go? Through Domaney’s?”

VanDeusen apologized to Tawczynski for the disruption and said Tighe & Bond, the town’s engineering firm, is studying the situation and will issue an alternatives assessment in the spring. A timeline will be included.

In other DPW business, VanDeusen said his department recently finished the repaving of the controversial Lake Mansfield Road. As planned, the DPW will convert the road to one-way as soon as possible. Signs have been ordered and consultants have been engaged to come up with a traffic plan. VanDeusen hopes to have the plan fully implemented in a week or two, “barring an early onset of winter.”

A portion of West Sheffield Road is temporarily reduced to one lane “because of a bank failure.”

A culvert also collapsed on East Sheffield Road, necessitating an emergency repair over the next week or two. East Sheffield Road could be closed for a couple of days during the repair. VanDeusen will then try to find the funds for a permanent fix.

Preliminary work has begun to mill and pave Route 23 west of the police station. Work has been shut down because of the cold weather. It might resume but there is the possibility that it will be delayed until the spring, VanDeusen explained.

Town planner Chris Rembold gave a timeline for MassDOT plan to construct a controversial roundabout at the intersection of routes 7, 23 and 41. Click here for a full explanation of that project.

“They have progressed to 100% design plans and estimates, those are at DOT are under review right now,” Rembold explained. “If everything goes as planned, we anticipate finalizing those specs and plans over the next few months and then bid the project in 2020. They hope to get a contractor on board in 2020 and begin construction 2021.”

Rembold also updated the board on two polluted town-owned properties acquired through tax foreclosure: Cook’s Garage and Ried Cleaners. Click on the previous links for backstory. To view Rembold’s update, fast forward to 5:45 in the video near the top of this page.

“We’re in the process now of developing an alternate drop-off pattern for parents . . . and are working together in hopes of announcing something soon, so . . . we’ll circle back to that topic.”

Pruhenski also announced that he has also been in regular contact with Hinds and Pignatelli about the proposal to bring horse racing back to the Great Barrington Fairgrounds. Click here to read background on that controversial proposal. Pruhenski also confirmed the town received a home-rule petition with 278 signatures certified by the town clerk.

Pruhenski said the “very complex matter” is being researched by town counsel and it is taking more time than he anticipated. The board later set a special town meeting consider the petition for Wednesday, Dec. 11, at 6 p.m. at Monument Mountain Regional High School.

Pruhenski also noted that the town’s plastic water bottle ban went into full effect Nov. 1 and the final three refilling stations are being installed this week, including one at the Mason Library.

Pruhenski also cautioned that the town’s winter parking ban recently went into effect through March 30, 2020. Overnight street parking is prohibited between 1 and 6 a.m. Vehicles blocking snow operations will be towed at the owner’s expense.

Police Chief Bill Walsh also gave an update on his department’s recently formed traffic enforcement unit and on the hiring of a new officer. Fast forward on the video to 8:00 for that presentation.