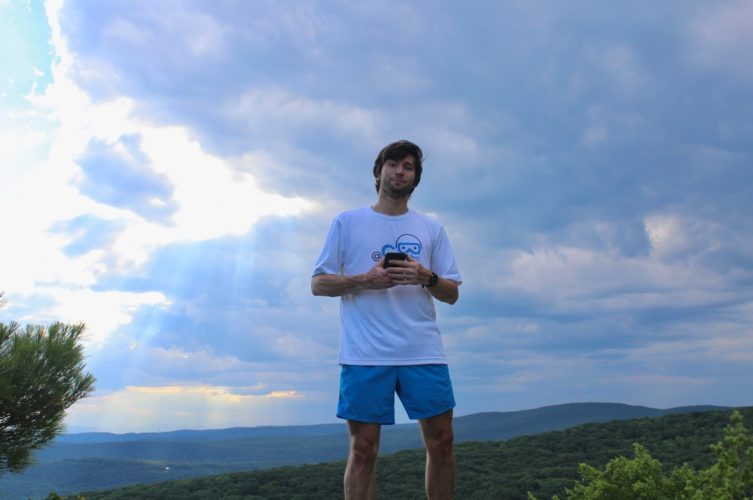 @GBLabs director Joe Grochmal took on all of the challenge locations as part of the Great 8, a list of hikes and adventures in Great Barrington that was developed to encourage people to get back outside. Photo: Georges Pichard

Great Barrington — Joe Grochmal may have lived in town for more than 20 years, but it wasn’t until the middle of this pandemic that he challenged himself to explore eight of Great Barrington’s parks and landscapes all in one day. And he managed to do it, at least a portion of it, in a full-bodied gingerbread man suit.

Grochmal began working for the town on several projects last year as a Lead for America hometown fellow. In November, the town put out an open-space survey. The results of that survey were collected in late February were to be assembled in a final comprehensive report. The survey touched on what sort of recreational activities people wanted to engage with as well as their familiarity with certain parks in town.

Looking over the results, Grochmal said that the feedback provided an opportunity to create a plan that would help people engage with the area. The survey included more well-known locales like Lake Mansfield and Monument Mountain Reservation as well as the lesser-known 1.2-acre William Stanley Park property. Though more are familiar with Monument Mountain, a Trustees of Reservations property, and its 1,642-foot summit, 39.45 percent had never been to William Stanley Park and 47.9 percent had never even heard of it, out of the 350 people that responded to the survey.

“I grew up in Housatonic, and I’ve lived in town 21 years and I’ve never been there,” Grochmal admitted.

In response to the COVID-19 pandemic, government research and marketing group @GBLabs was formed with aims on improving community cohesion and engagement in Great Barrington, with Grochmal serving as its director. In late May, he circled back to the file he had started that included a list of eight parks and hiking sites, and added a challenge element.

“I thought I would spice it up for those of us, like myself, that are all about adventure,” he said.

And at the end of July, the group officially launched “the Great 8,” which highlights Monument Mountain, Benedict Pond, Pfeiffer Arboretum, Housatonic Park, Lake Mansfield, Giggle Park, Flag Rock and William Stanley Park. As a bonus, @GBLabs provides a list of challenges for visitors as they explore the different landscapes, including checking out a park with another person, writing a short piece or poem at the peak of Monument Mountain and/or having a picnic in the park.

To complete the Great 8, participants have to visit all eight of the challenge locations, take a photograph at each of them and tag @GBLabs on Instagram or send their photographs to atgblabs@gmail.com. Participants who complete all eight hikes and all eight bonus objectives will be entered into the running for a shot at winning the Great 8 merchandise such as apparel, bags and phone cases.

To test out the adventurous initiative, Grochmal and @GBLabs Fellow Georges Pichard spent a day hitting all eight locations. One of the more challenging endeavors that afternoon in the July heat was donning a gingerbread man costume on the hike to Flag Rock, Grochmal said.

The day provided an opportunity to see Great Barrington a little differently, said Pichard. While he’s lived in town for 13 years, Pichard said he’d never been to Pfeiffer Arboretum.

“I hope people are able to see Great Barrington in a whole new light,” he said. “Truthfully, over this COVID summer we’re having, I’m learning about all the things that are available to us, and shedding a light on that for people that do not know about all the incredible hikes and parks we have available to us.”

Pichard and Grochmal also shared a picnic lunch at William Stanley Park, the namesake of which obtained 129 patents in his lifetime. An inventor and engineer, Stanley is known as one of the more notable inventors of AC power.

“My experience at William Stanley Park was two-fold; I learned about his significance as an inventor … and that beauty can take different forms in town,” said Grochmal. “The park is located across the street from Cumberland Farms and it’s rather small. But with that being said, with a picnic lunch and some friendly faces, you can make a memory and have an incredible moment you won’t forget.”

In addition to the Great 8, @GBLabs has its hands in other community initiatives like the GB Pandemic Poetry Project. The goal behind the initiative was to document this time in Great Barrington and global history through verse, submitted by members of the community. The project was born following a conversation between @GBLabs Fellow Cathy Zang, Great Barrington resident Patty Melville and Grochmal. As a result of the large number of positive responses from that, the group also launched “GB Renga Project,” which is an ancient style of Japanese poetry that is composed in stanzas.

For the GB Renga Project, the first poet writes a stanza that is three lines long with a total of 17 syllables (five syllables in line one, seven in line two and five in line three). The next poet will add two lines of verse with seven syllables per line. The third poet will follow the same instructions as the first, and the fourth will follow the second. The pattern alternates until the poem is completed. Writers only see the line that immediately precedes their own.

@GBLabs Fellow Meryl Phair, a resident of Stockbridge, is among the first contributors to this initiative.

“It’s one thing for a person to write a poem sharing their personal feelings and experiences,” she said in a statement. “It’s a different challenge and experience to contribute to a larger piece with limited context.”

Community members who are interested in participating can sign up for the project through Google Form. Click here to view it. Once signed up, participants will receive an email from atgblabs@gmail.com with a brief project description, a reminder of the guidelines and the previous renga line, and will be asked to respond with their contribution within 24 hours. At the end of the project, all participants will receive a completed copy of the renga, which will also be published on @GBLabs’ social media accounts.

The group also developed an initiative with the help of Berkshires-based developer and business owner Richard Stanley that showcases businesses that are being responsible through the pandemic with an identifying seal through the GB S.A.F.E. Program.

In light of recent national and international events, the group set “Run 91.01” in motion to raise money for Volunteers In Medicine Berkshires and the Berkshire County chapter of the NAACP. Envisioned by Grochmal and Pichard, the initiative set a challenge for Grochmal to run every mile of road in Great Barrington within 10 days, starting Aug. 10.

In December, Grochmal said that he’d had a conversation with VIM executive director Ilana Steinhauer, during which she shared the organization’s mission and work.

“I was blown away by how they fill a valuable need in the community, and in the months that followed, I continued to learn more about their amazing work through conversations with community members. This was especially true early in the pandemic. Early in the planning stage for ‘Run 91.01,’ George Floyd was murdered and we felt that it was important to draw attention to the equally valuable and necessary work of the Berkshire NAACP,” he said. “Run 91.01 was also an effort to both collect marketing footage and encourage community members to go and explore all parts of town. This initiative was a celebration of community, similar to many of our other projects from Pandemic Poetry to GB S.A.F.E. to the Great 8.”

Grochmal ended up completing the run — approximately 107 miles — over the course of eight days. The run raised $1,131 that will be split between VIM and NAACP Berkshires.

At this point, Grochmal said, the town is planning on operating @GBLabs for the foreseeable future. All of the fellows in the group will continue to work for either the lab or the town.

“We already have some great new projects that we are hoping to launch in the coming weeks and months!” said Grochmal.