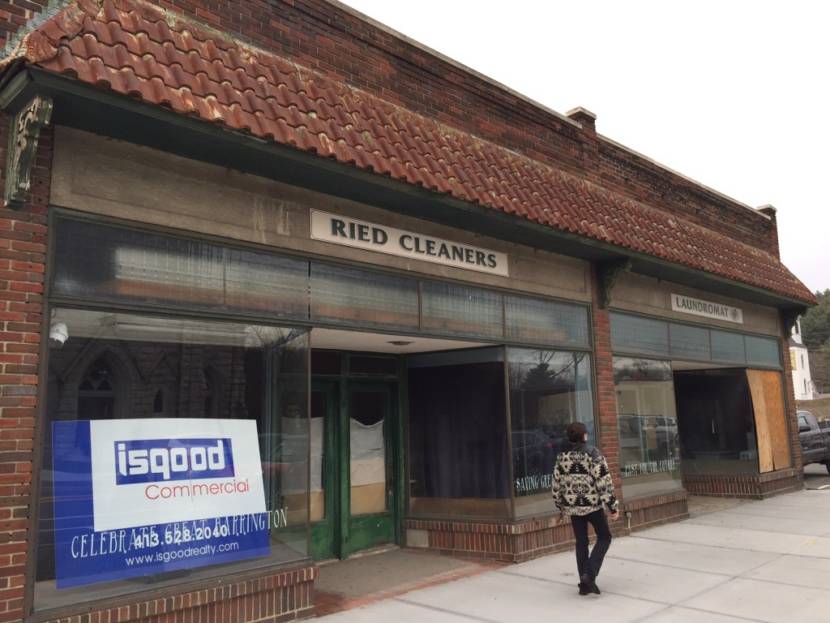 The town of Great Barrington has signed an agreement with the state to foreclose on the polluted Ried Cleaners property for nonpayment of taxes. Photo: Heather Bellow

Great Barrington — You might say the town of Great Barrington could become the not-so-proud owner of a dry cleaning business. On Monday night, the selectboard voted unanimously to foreclose on the troubled Ried Cleaners property for nonpayment of taxes.

In signing a cost settlement and lien release agreement, the board empowered the town to take control of the polluted site “in the overall interest of seeing the site cleaned and redeveloped,” according to the executive summary of the agreement. Click here to read the entire document.

Town planner Chris Rembold, who has been following the situation closely, said these kinds of settlements are typical in cases where the state Department of Environmental Protection has placed a lien on a property of this type.

“The last party that has an interest in the site is MassDEP, and that’s because, in 2011, they had to step in and do some remediation and testing work there to the tune of about $100,000,” Rembold explained.

See video below of town planner Chris Rembold explaining the foreclosure proceedings on the Ried Cleaners property, along with questions from members of the selectboard:

The town began foreclosure proceedings on the property in 2016 and it was apparent even at that time that the property could fall into town hands. “We don’t want to own it,” said town manager Jennifer Tabakin said at the time.

Rembold said that, since MassDEP had spent a considerable sum on the clean-up and had placed a $100,000 lien on the property in 2012, the department expected to be repaid through any net proceeds from a potential sale of the property.

With the help of state Rep. William “Smitty” Pignatelli, D-Lenox, the town of Great Barrington was also awarded a grant of $91,000 in 2014. Those funds were allocated from the Brownfield Assessment Program by MassDevelopment, the state’s finance and development agency. But that grant is not “in the chain of title” for repayment, Rembold said.

The agreement anticipates “no significant” fiscal impact “in the near term” for the town. Taxes were not being paid on the property anyway so there will be no revenue losses. With the remediation that has already been conducted, along with ongoing and future clean-up, potential sale of the Main Street property could put it back on the tax rolls, thus generating revenue. The amount of unpaid taxes to the town totals almost $80,000, the agreement says.

Selectboard Chairman Steve Bannon asked Rembold what would happen if the town did not sign the agreement.

“We would not move forward in this proceeding because we couldn’t clear the title, so the property would remain in private hands, in limbo, with an owner that can afford to do nothing with it,” Rembold explained.

The business had been owned and operated since 1952 by Herbert and Nancy Ried. The couple decided to retire and closed the business in 2006. The Rieds owned both the cleaners building and the former Arnoff Pack and Ship building next door, which was subsequently sold to Salisbury Bank for use as its Great Barrington office.

The inside of the cleaners and laundromat appears to be frozen in time. Even as environmental remediation trucks could be seen outside the building, on the inside, several articles of dry-cleaned clothing remain hung on the lines and covered in clear plastic. Until recently, a bouquet of plastic flowers survived next to the cash register, along with a heavy-duty tape dispenser. Clothes dryers were still visible along the north wall of the laundromat.

The Ried property was put up for sale after its closing but a sale could not be completed. Developer Jeffrey N. Cohen offered to buy it in 2015 but the offer was rejected.

About half a dozen interested buyers, including Cohen, wouldn’t make offers that would be enough to help the Ried family pay back the town and the state for an initial cleanup.

The asking price dipped from more than $700,000 down to $169,000 after an initial inspection revealed catastrophic contamination. The total cost for the clean-up could be as high as $1.6 million, Rembold has said, but there are ways of bringing that total down and additional grants potentially available to the town.

The property has become infamous locally for its toxic underground plume, which includes tetrachloroethylene, a chemical solvent used in dry cleaning and a common soil contaminant. It is better known as dry cleaning fluid.

According to an environmental study known as an “Interim Phase II Comprehensive Site Assessment Report,” paid for by the aforementioned MassDevelopment and completed in September 2015, the contamination is also an ecological threat since it is flowing towards the Housatonic River. The report says workers in the Post Office exposed to basement air are at “chronic risk” due to naphthalene, tetrachloroethylene (PCE) and trichloroethylene (TCE).

Future town response costs could be recouped by more grants. Indeed, the agreement encourages it. The agreement also charges the town with completing the “necessary response actions with respect to the site required by” Massachusetts General Law Chapter 21E “to the extent the town has adequate funding.”