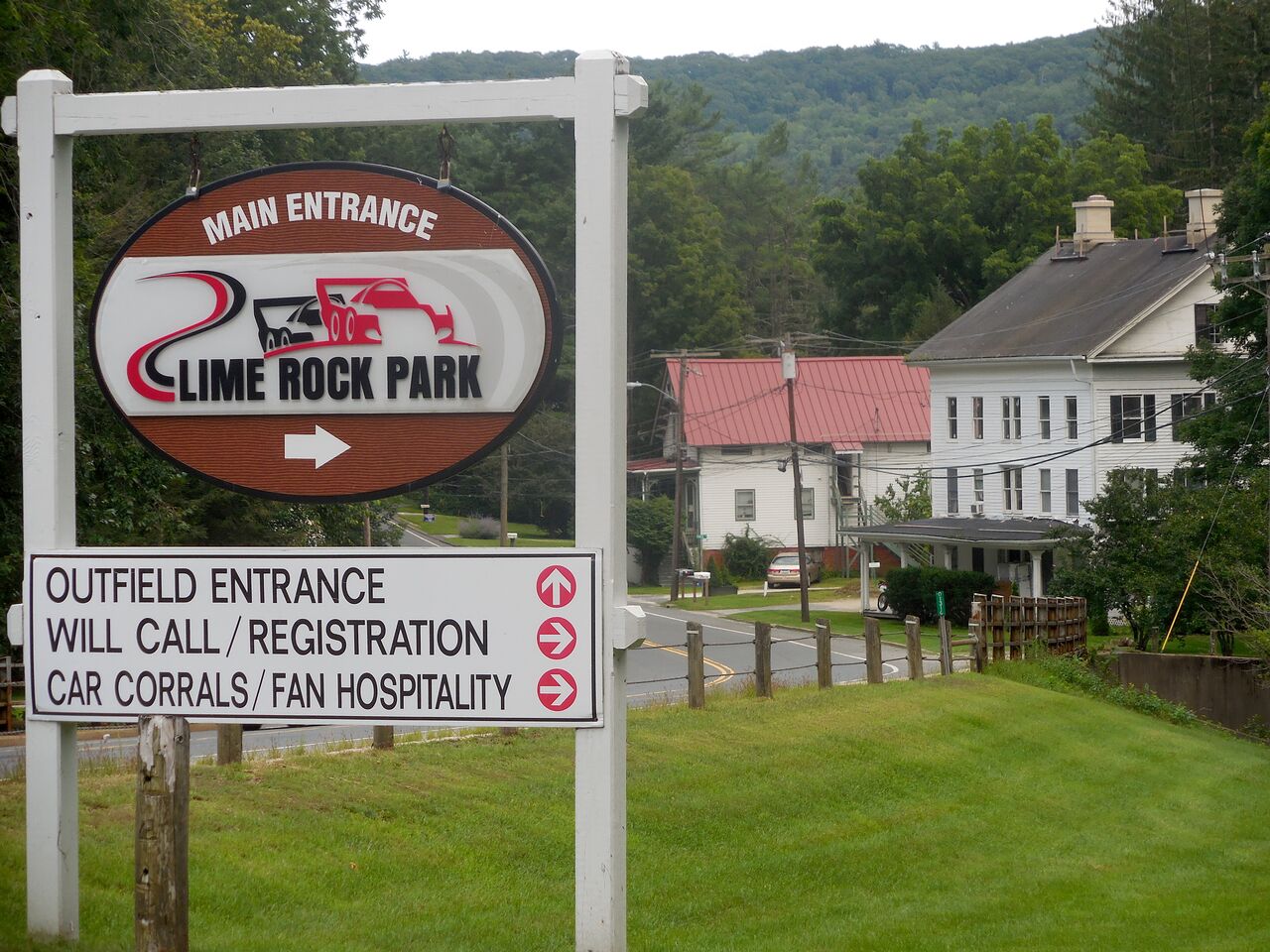 Lime Rock, Conn. — It’s a classic legal dispute centered on land use and the fine points of the law. In a bucolic hollow about five miles south of the border with Berkshire County, a 60-year-old Connecticut auto racing track insists it’s fighting for its survival. And the neighbors who are battling its expansion are convinced their way of life hangs in the balance.

At issue is a picturesque but controversial racing venue, Lime Rock Park, just down the road in Salisbury, and who should govern its operations. The town and its 4,000 full-time residents have had a rocky relationship with the park since it opened in 1957 after being built on the remnants of an old gravel pit. It’s got to be the only racetrack in the country whose operations are governed largely by a court injunction.

Lime Rock Park, a unique and upscale auto-racing track, finds itself in an uncomfortable position. The track, which is located in the town of Salisbury, is currently prohibited from holding races on Sundays — evidently the only such facility in the nation facing that prohibition.

But the ban on Sunday racing wasn’t imposed by the town, or even the state. Rather, it’s the result of a court injunction issued in 1959, only a couple of years after the track was built from the remnants of an old gravel pit. Neighbors, an Episcopal church across the street from the park and the caretakers of a cemetery rose up in outrage and the original track owners were taken to court after a nuisance suit was filed.

The result was a permanent injunction that largely governs the track’s operations. Click here to read the original 1959 decision and its amendments. It is interesting to note that state law explicitly allows racing on Sundays but not before noon. So the 60-year-old injunction essentially overrides Connecticut law.

Three years ago, the Salisbury Planning and Zoning Commission moved to actually incorporate the injunction into its zoning bylaws. Lime Rock Park owner Skip Barber—a retired racer himself and the former owner of the racing school that still bears his name—filed a lawsuit challenging that action and seeking relief, he said, to remain competitive and economically viable. Barber wanted to have more hours of racing (including on a limited number of Sundays), more unmufflered competitions and increased campsite occupancy.

This is was a cause for alarm on the part of some homeowners since the track is located in a residential neighborhood. Actress Laura Linney, who owns a home not far from the track, wrote a letter to the editor of the Lakeville Journal arguing that allowing the expansions would transform the track’s relationship with the town “from Boisterous Neighbor to Noisy Autocrat.”

Music Mountain, the venerable music venue across the Housatonic River in Falls Village, is a favorite of many Berkshire County chamber-music aficionados and holds most of its concerts on Sunday afternoons. Its supporters say the organization could not survive if racing were allowed on Sundays from Memorial Day through Labor Day, the busiest time for both Music Mountain and the track.

To no one’s surprise, a group of town residents formed the Lime Rock Citizens Council in an effort to combat the track’s plans. Lawn signs proclaiming “Save Sundays” began popping up around town. Music Mountain and Trinity Lime Rock, the church across the street from the track that was involved in the original injunction, also signed on as LRCC partners.

Meanwhile, earlier this year, opponents of Sunday racing were shocked when a judge at Superior Court in Torrington seemed to agree with Barber, ruling, among other things, that the commission does not have the authority to limit racing on weekends. Click here to read the 47-page decision of Judge John D. Moore.

“This is by far the biggest issue that residents of Lime Rock and the town have ever faced from the track,” said Peter Wolf, a member of the LRCC whose home sits across the street from the track entrance on White Hollow Road. “There have been issues before but nothing on this level.”

Both the town of Salisbury and the LRCC are appealing Moore’s ruling, a decision that could pave the way for expanded track operations that they say will infringe on the town’s ability to regulate activity within its borders and alter the way of life of nearby residents. Click here to see a list of the LRCC’s many grievances.

Wolf described the LRCC’s move to appeal Moore’s decision as “strictly defensive” and said a successful appeal will still allow the track to continue doing business as it has for 60 years. He emphasized that his group does not want to put the park out of business.

“All we want to do is keep things the way they are,” Wolf insisted. “They really want to expand.”

“This area of Connecticut is a sanctuary to me, my family and my neighbors,” Linney wrote. “It would be devastating to all us if our evenings, and our one quiet day of the summer weeks, were also taken by the eclipsing noise of Lime Rock. It would change our lives here drastically.”

One meme circulating on social media and promulgated by a loudmouthed racing blogger is that those who want to continue to restrict the park’s operations are little more than “NIMBY neighbors.” But of course, it’s also fair to point out that residents of Lime Rock have been living with the track in their backyards for 60 years.

As you might expect, Wolf was quick to dispel the NIMBY argument. He said those who bought property near the track since it first opened did so with the reasonable expectation that the permanent injunction would remain in place.

As for whether Music Mountain would remain viable, representatives from that organization could not be reached for comment. But Thomas Morrison, an attorney who sits on the Music Mountain board, told the Millbrook Independent two years ago “the activities the Park seeks to legitimize via its lawsuit to modify the 1959 injunction would make it impossible for Music Mountain to continue its Sunday afternoon concerts.”

“If the track got what it wanted, Music Mountain would go out of business,” Wolf surmised. “All their main concerts are on Sunday afternoons. They broadcast all over the world and record them … It would finish off Music Mountain.”

In an interview, Barber said the track is not expanding and that, in fact, it has “contracted and gotten quieter in about 25 different ways.” The track is in use fewer days, crowds tend to be smaller, there are fewer professional events “and those professional events are quieter because we don’t have the big V-8s.” In addition, more people who come to the races are camping, which reduces traffic in and out of the park.

“Everything is better except we want a couple of Sunday afternoons,” Barber said.

Barber said Lime Rock Park is the only major racetrack in the country that is prohibited from holding races on Sundays, which limits its ability to compete with other tracks that do not operate under such stringent conditions. On the Sundays of holiday weekends such as the upcoming Labor Day weekend, Lime Rock often hosts car shows instead of actual racing.

If the track cannot secure the right to race on a limited number of Sundays, then it runs the risk of losing a pair of what Barber called “major events.” Barber said he has been trying to work out a compromise with the town planners for 10 years. But when members of the planning and zoning commission tried to incorporate the injunction into the zoning code itself, Barber felt he had to challenge them.

“Injunctions are meant to be fair and reasonable, but they should change with changing circumstances,” Barber opined.

Barber said the legal fight has been “very expensive” and, with the LRCC and town appeal looming, lawyers’ meters will start running again and bills will no doubt continue to rise. He declined to say exactly how much his company has spent on lawyers.

“You could buy a very nice house in this area for what I’ve spent on legal fees,” said Barber, who acquired Lime Rock Park with a group of investors in 1984.

About a dozen years ago, Barber proposed to alter the terms of the injunction to allow for Sunday racing during the July 4 weekend and as a possible rain date for the one stock-car race the park holds each season. The proposal sparked strong reactions among some Lime Rock residents but it ultimately went nowhere.

At that time, the upshot was the reconfiguration of the Lime Rock Protective Agency Inc., a group formed in opposition to the track when it first opened in 1957. A meeting of the revived group was held at the home of Martha Miller, a tax attorney who lives directly across from Route 112 from the track.

Miller was then a leading opponent of Sunday racing. She told the Edge she is not involved with the LRCC “because the position they’ve taken is unreasonable.” Miller questioned the LRCC’s strategy adding that, “They should have said, ‘We’ll give you a couple of Sunday races. What can you give us?'”

“People should be talking instead of expecting the courts to solve their problems,” Miller laughed. “And I’m a lawyer, but not a litigator.”