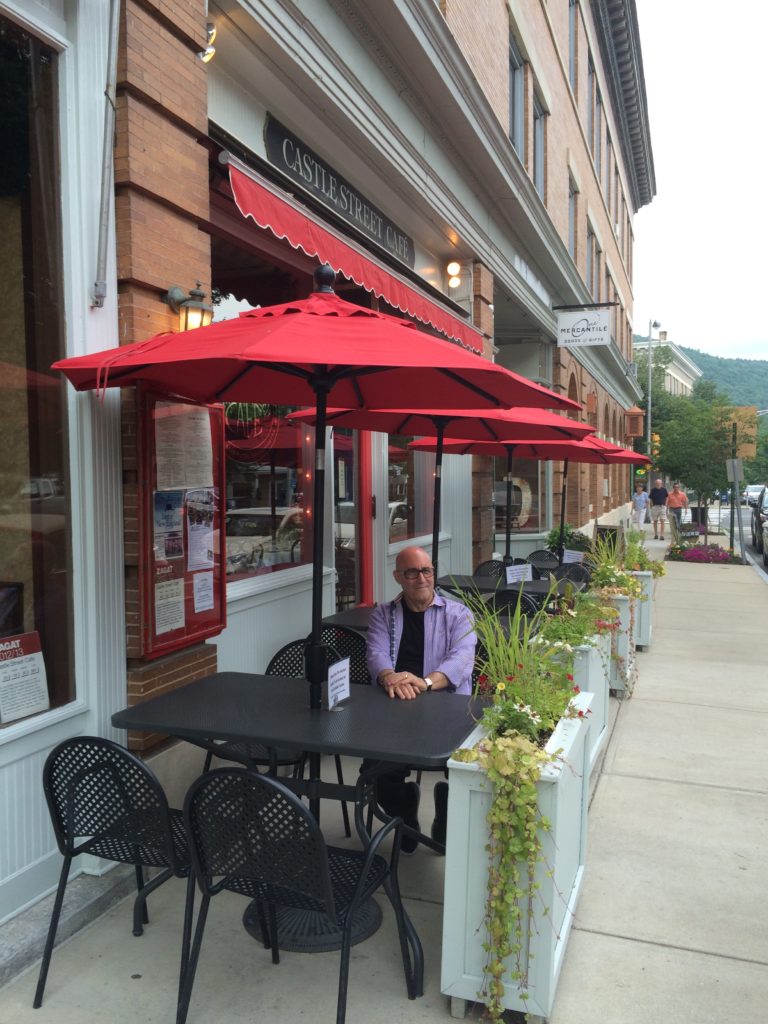 Alan Kalish sits at an outdoor table at the former Castle Street Cafe. The Great Barrington Selectboard is considering closing Castle and Railroad streets during the evenings so that restaurants struggling to reopen can expand their outdoor dining spaces. Edge file photo

Great Barrington — When Gov. Charlie Baker issued his most recent executive order phasing out restrictions on retail operations imposed during the COVID-19 pandemic, the door was opened to outdoor dining options for restaurants.

The problem for Great Barrington’s downtown restaurants is that most do not have sufficient outdoor space to reopen and make a go of it by mostly serving meals and drinks on the sidewalks.

Some towns are attempting to address the problem by expanding the available space to include the street. The only way to accomplish this is by partially or completely closing side streets during the evening hours when dinner is being served.

“As a staff, we are very committed to helping out downtown restaurants to be successful in the coming weeks and we are in the process now of trying to figure out how we can open streets [for dining], maybe Railroad Street, Castle Street, after retail hours and allow for expanded outdoor seating,” town manager Mark Pruhenski told the selectboard at its virtual meeting Monday night.

The busy Main Street is essentially a state highway, so it could not be closed. But additional sidewalk space could be allotted to the many restaurants that dot that street.

Click here to stream a video replay of the meeting courtesy of Community Television for the Southern Berkshires. Fast forward to 1:01:30 to listen to the presentation and discussion on outdoor dining.

Pruhenski said legislation passed June 1 at the State House on Beacon Hill, making it easier for municipalities to close some streets in order to make room for additional outdoor dining space for the struggling restaurants, most of which have been closed to all but takeout orders since mid-March.

That legislation runs only through Sunday, Nov. 1, so it would be far from permanent. Local licensing authorities can now approve expanded outdoor seating without the time-consuming process of holding public hearings and notifying abutters.

“I know that may sound like we’re not interested in hearing what abutters and others may think,” Pruhenski said. “That’s not the case. We’ll still, of course, approve these in public sessions at selectboard meetings.”

Selectboard member Leigh Davis said she has heard from two businesses on Railroad Street that are interested in closing the street for evening dining. She wanted to make sure the town was proactive moving forward and offered to be a facilitator.

Closing Railroad Street or Castle Street does present logistical problems, mostly in the area of parking. If Railroad Street, which is one-way, were closed for outdoor dining in the evenings, how would motorists access the parking lot in front of the Triplex Cinema, which is itself scheduled to reopen at the end of the month? Selectboard member Bill Cooke suggested temporarily converting Elm Street to two-way traffic, to allow for access to that parking lot and the town-owned lot farther up Railroad Street.

“We have tried to explore options such as leaving half the road open and closing half the road for dining, but we really just felt that there’s no safe way to have moving vehicles and patrons in the road at the same time,” Pruhenski explained.

Pruhenski and Davis said they envision closing Castle and Railroad during the summer months after standard retail hours. Restaurant crews would start setting up at 4 p.m. and open for outdoor dining at 5. The dining hours would extend to 10 p.m.

There are four restaurants on Railroad Street: Baba Louie’s; Bizen; 20 Railroad Public House; and Mooncloud. In addition, there is SoCo Creamery, an ice cream shop.

Later in the meeting, the board unanimously approved a request from Mooncloud attorney Kate McCormick to allow the restaurant to expand its outdoor dining area. Currently, Mooncloud may use the triangular-shaped brick-paved porch at the entrance of 47 Railroad Street. The restaurant asked to expand the outdoor seating to the walkway between 47 Railroad Street and the building occupied by Crystal Essence.

Pruhenski said the town needs to ensure that it is not closing off pedestrian walkways entirely or limiting access to disabled individuals. He has been meeting regularly with the town’s public safety, public works and health departments to plot strategy on the way forward.

“There are still a lot of unanswered questions and a lot of work to do, but we’re committed to making this happen quickly so that businesses can thrive during this time” Pruhenski continued. “So if you own a business or restaurant in downtown Great Barrington, please reach out to us and we’ll get working on your proposals.”

Pruhenski added that Town Hall is scheduled to reopen Monday, June 15. Lower occupancy limits will be in place in accordance with state guidelines. The town plans to issue a press release on that subject soon.