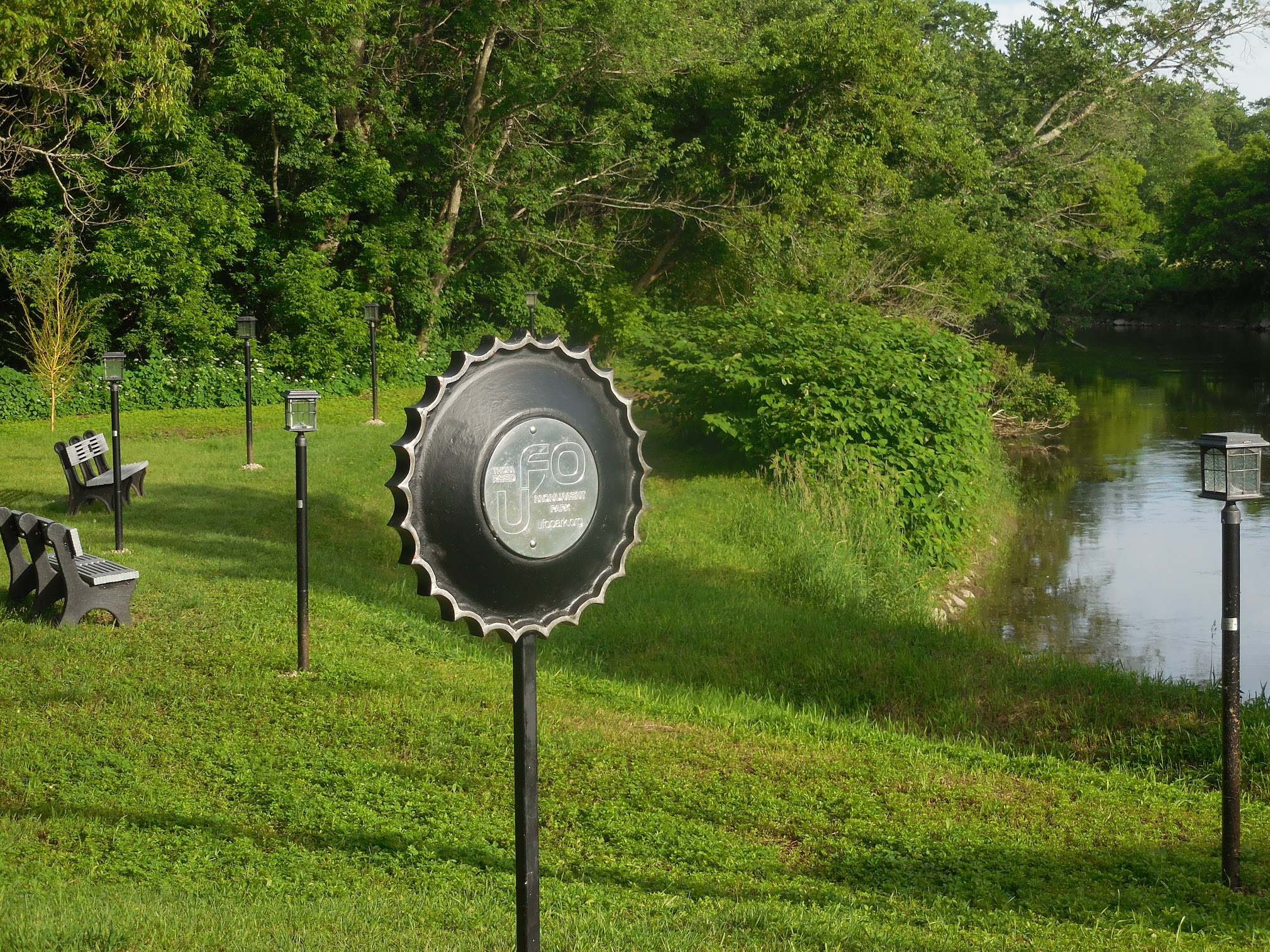 The portion of the UFO monument park on the Aragi property in Sheffield on the banks of the Housatonic River. Photo: Terry Cowgill

Sheffield — The town administrator did not order its removal and its owner did not go through proper channels in outfitting and clearing adjacent land for a park.

For the first time in a while, town officials spoke publicly about the recent removal of a controversial monument commemorating an alleged UFO sighting that was deemed to be on town property. The 5,000-pound concrete monument was moved twice, most recently on June 4, when members of the town highway crew took it away and transported it to an undisclosed location.

Selectboard member Nadine Hawver, acting as chair in the absence of Rene Wood, read a statement at Monday’s meeting in order, she said, to clear up “some confusion” among the “many comments and opinions on the UFO monument and its location.”

See video below of selectboard member Nadine Hawver making a statement on the removal of Thom Reed’s UFO monument:

In comments on social media and on The Edge itself, town administrator Rhonda LaBombard was strongly chastised, with one commenter calling her out for her “shameful misuse of power” and another adding, “Shame on you for this action.” Indeed, the website of the owner of the monument states in a timeline of the imbroglio that, “Sheffield’s Rhonda Breaks agreement and Hauls Away UFO Monument.”

Nothing could be further from the truth, Hawver said.

“The board would like to state that the decisions on the monument and its location are board decisions,” Hawver explained. “The town administrator does not have the authority to make decisions on this issue, nor has she.” Hawver added emphatically that, “Placing items or using town property without permission of the board will not be allowed.”

The monument and park were built to commemorate what Thomas Reed, who now lives in Tennessee but grew up on Boardman Street, calls an “off-world incident.” In an Aug. 26, 2015, ceremony, Reed and a group of supporters gathered at the covered bridge off Route 7 to commemorate an event that occurred Sept. 1, 1969, when Reed and others say they saw a UFO near the site.

Reed, then only 9, said he and his family found themselves “being taken aboard a tarnished circular looking vessel where an image of a willow tree was displayed,” according to Reed’s website. A monument to the sighting was placed near the Sheffield covered bridge during the ceremony almost four years ago.

But trouble soon erupted. Many people in town were upset by the monument’s appearance. Moreover, the town’s attorney later determined that the monument had been placed on town property and the order came down for it to be moved.

Reed insisted town officials had told him the original location was fine but the monument was later moved about 50 feet to the east onto the property of his friend Louis Aragi, who owns Pine Island Farm.

Subsequently, a town land survey found that the slab and its accoutrements were still on town property, a slender parcel associated with Covered Bridge Lane, and Reed must relocate them or the town would do it for him. Click here to see the survey produced by Kelly Granger Parsons & Associates and dated April 2019.

Later in the meeting, Ashley Falls farmer Bob Kilmer asked Hawver why the monument was moved a second time. Hawver said, after the first move, the town thought the monument’s new home was on private property but a formal survey revealed that it was still on town property, hence the request to move it again, especially after those stewarding the monument were unresponsive to requests from the town to move it again.

See video below of Rannapo Road resident Bob Kilmer asking questions of the board of selectmen:

Hawver also disclosed that work was performed without proper approvals on another portion of the park that is on Aragi’s property. That area on the riverbank has been outfitted with benches and solar-powered lamps.

“Probably everything would have been just fine if the monument had been the only thing that was done over there but whoever, I don’t know who, has been adding lighting, benches, clearing land that the conservation did not approve in the wetlands for work to be done,” Hawver explained. “So at that time, we really felt that we needed a full survey to see what was where and had to get town counsel involved.”

“I absolutely agree it should not be on town property,” Kilmer replied. “I mean, we don’t want the liability, the maintenance or any of the other issues.”

That spokesman would appear to be Reed, who shared with The Edge several emails he had exchanged with town counsel Mark Reich and LaBombard indicating the town knew who he was and had no objection to the monument and its location. But those emails were from 2015 and 2016, before the land survey was completed. Reed also told The Edge he had recently sent a letter to the town, acknowledged by LaBombard and asking, among other things, for a “fresh start.” Click here to read the letter, which was not mentioned at Monday’s meeting.

Reed spokesman Mark Lavoie disputed that the portion of the Aragi property with the benches and lamps is in land designated as wetlands. Click here to see a wetland map of the area from the state Department of Environmental Protection and cited by Lavoie. The land is, however, on the banks of the Housatonic River, where the conservation commission typically has jurisdiction. The land itself is zoned rural and lies in a public water supply overlay zone, according to town zoning maps.

Lavoie said the lights and benches are not “permanent structures” and that the only clearing activity on the property was mowing, which “does not require [conservation commission] oversight.” Up until recently the land was farmed.

“Often, equipment is left in the field,” Lavoie said in an interview. “I don’t quite understand what is going on.”

Earlier this month, Reed threatened legal action and reported the incident to the police. Lavoie called the town’s action “theft of property.” But Tuesday, Lavoie conceded to The Edge that the monument might have been on town property and suggested a solution to the current crisis:

“It seems like it’s overkill here. What is the problem with releasing the monument and the bench with the assurance that it’s not going to be on town property? [Reed] would find a location that was suitable. So give it back and put it nowhere near the town’s footprint … I want to support an amicable solution for all.”

Asked by The Edge where the monument was being stored after its removal, Hawver replied, “We are not releasing the location of storage at this time.”