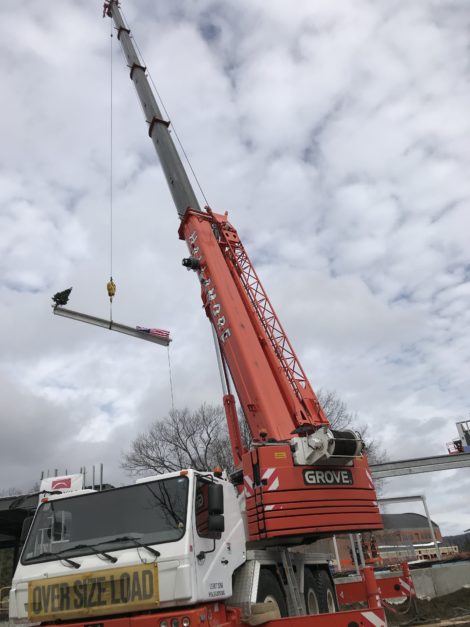 Eli Newberger
With grace and precision the crane operator from Consigli Construction Company lowers the ibeam onto -- or 'top's off' -- the walkway connecting Seiji Ozawa Hall with a complex of four new buildings at Tanglewood Music Center that will become the Tanglewood Learning Institute.

Toppings off and new beginnings at Tanglewood Music Center

Lenox — On a rare sunny February morning here in the Berkshires, trustees, staff and guests of the Boston Symphony gathered at Tanglewood Monday (February 12) to celebrate the laying, or “topping” of the final steel ibeam for the ceiling of a walkway that will connect Ozawa Hall to a succession of four new buildings. Dedicated to the values, teaching and scholarship of the Tanglewood Music Center (TMC), the complex will also serve as the home of the new Tanglewood Learning Institute (TLI).

The guests of honor were the workmen of the Consigli Construction Company, who along with leaders of the BSO, signed the beam before it was hoisted into the air and placed at the peak of the passageway. A point of pride for the BSO and for all of us is that 72 percent of the subcontracts were awarded to local Western Massachusetts firms, with 16 percent based in Berkshire County.

Picking through February ice and muck at the back end of the Tanglewood grounds, we felt as though we were entering the world of Richard Scarry, whose books we read at bedtime to our little girl decades ago. Perhaps you remember the busy airport or the bustling city. This was the busy construction site, with giant cranes and bulldozers lumbering through the landscape.

The topping off was an occasion for celebration. In a heated tent, Joyce Linde, the BSO trustee and chair of the TMC/TLI initiative committee and Mark Volpe, BSO managing director greeted the gathered guests and spoke passionately about the BSO’s vision of enhancing the development of outstanding young musicians and, as well, offering through the calendar year education and enrichment programs for the community it serves.

Wearing hard hats and fluorescent green mesh vests we viewed the impressive skeletons already erected of the four buildings that will comprise the rehearsal, lecture and concert halls, and 150 seat cafeteria, designed by William Rawn Associates, the architects who designed Ozawa Hall. 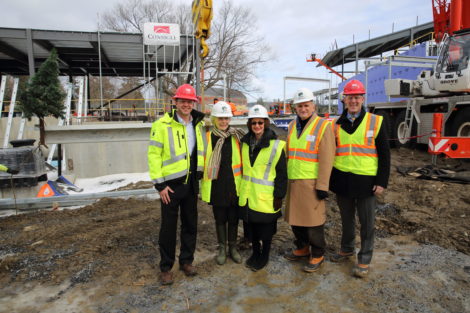 With the delicacy of a figure skater (can’t resist, with the Olympics going on), the crane operator positioned the beam in front of the tent for the workers and guests to sign.

Then with equal grace the beam was hoisted to its resting place, an American flag flying from its right corner. 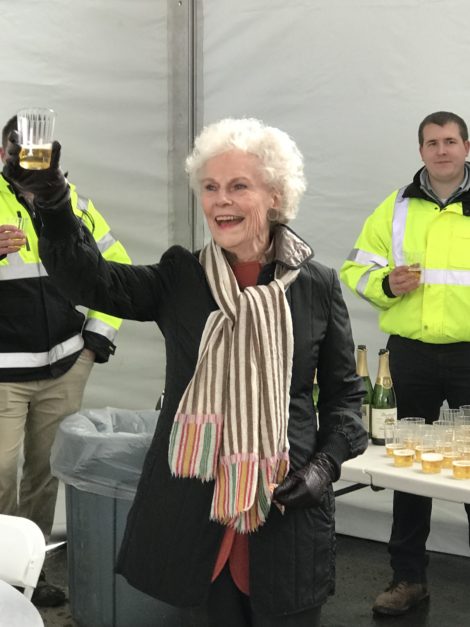 BSO Chairman of the Board Susan Paine toasts the beginning of a new era at Tanglewood Music Center. Photo: Eli Newberger

Back in the tent following the topping, Susan Paine, the experienced and dedicated new chairman of the Board of Trustees, took the floor. Susan raised a glass of sparkling grape juice to lead a toast to the construction team that has put in thus far a total of 23,921 work hours since September.   We got to know and admire Susan for her work with the Bunting Institute at Harvard, where Carolyn was a fellow in the 1991-92 academic year, and subsequently as board chair of the Museum of Fine Arts in Boston while we served on a visiting committee. In every one of her many leadership roles, Susan has shown caring, judgment, and an impressive comprehension of the balance of tradition, community service, and finding the resources to build and sustain artistic excellence.

Until 2019, this corner of the Tanglewood property will continue to be a bustling construction site, unfolding before our eyes.  We look forward to its completion with admiration and delighted anticipation.

Here is a description from the BSO website of the goals and anticipated components of the Tanglewood Learning Institute: 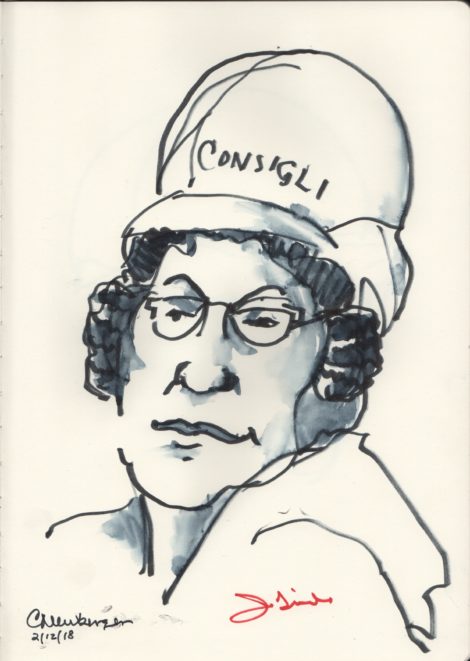 “The TLI will offer patrons several new and distinctive education and enrichment offerings, including a variety of learning and appreciation programs, featuring seminars and panel discussions, film presentations, conversations with artists, and special access to concerts and master classes. A keynote lecture series will spotlight highly sought-after speakers to give presentations on subjects related directly and indirectly to each Tanglewood season. It will also develop a unique and focused set of special offerings attractive to the festival’s local concertgoers, as well as to visitors from across the United States and abroad. This program will include an all-inclusive “passport program,” whereby participants are given access to BSO and TMC closed rehearsals, TMC master classes, and backstage visits with BSO and TMC musicians, guest artists, and conductors, among other activities. The Tanglewood Learning Institute will also have a distance-learning component featuring inline viewing of many of the TLI sessions, as well as of select Tanglewood Music Center master classes and rehearsals. Specific details of the first session of the inaugural 2019 Tanglewood Learning Institute season will be announced in the fall of 2018.