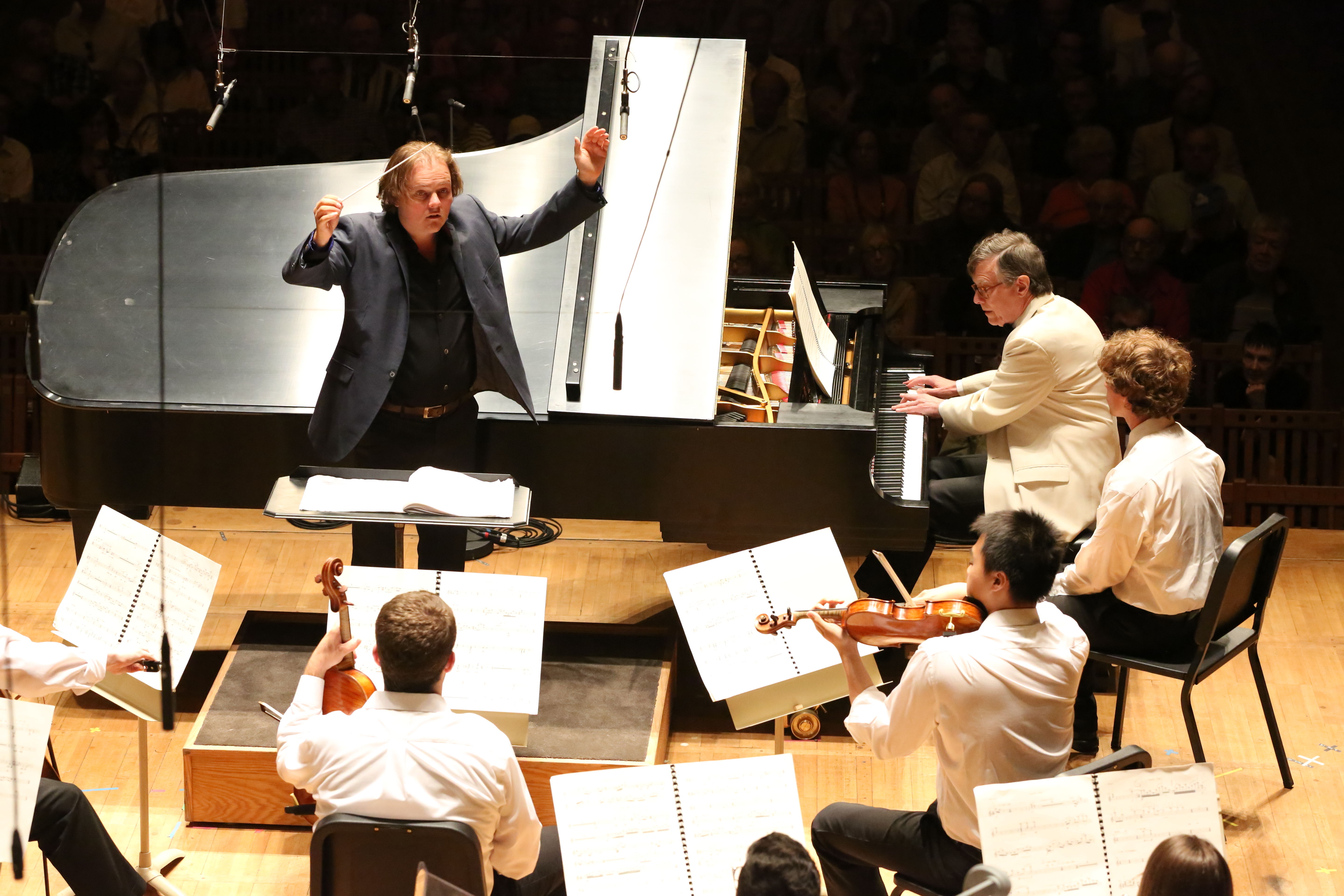 Lenox — Last Monday (July 20) was the first day of Tanglewood Music Center’s annual Festival of Contemporary Music. A few minutes before the concert began, I received a 15-second summary of the evening’s works from a local composer. He broke them into two groups: Fun and Pretty. It’s not quite that simple, of course, but these classifications actually can be useful as a starting point for a person hearing these works for the first time. Among the fun pieces were a few that sounded almost like scores for science fiction or horror films. So, for my own convenience, I added a third classification: Scary.

First on the program was Detlev Glanert’s “American Prelude No. 1,” which clearly belongs in the Fun category. For me, Glanert’s piece was the highlight of the evening, and judging by the deafening audience response, I’d say everyone in the auditorium agreed. Conductor Ruth Reinhardt, smiling radiantly throughout the performance, seemed to be having the time of her life.

Mr. Glanert has described his own music as “complete theater.” That sums it up well, because there’s a cinematic quality to his music that invites comparison with classic film scores. However, in the case of “American Prelude,” a few additional words are appropriate: Rollicking. Rollercoaster-esque. Or maybe, Mr. Toad’s Wild Ride Redux. Plenty of other words would be apt, but “complete theater” encompasses nearly all of them.

Yes, Detlev Glanert certainly knows how to party. And when he does, he flings colorful ear candy in every direction. So much of it, in fact, that one can’t possibly hope to pocket every morsel. It’s like manna in the desert; it must be consumed on the spot, because very soon it will vanish without a trace. And so it did. Poof! Glanert’s piece ended, and the audience roared.

Second on the program was the world premier of Einojuhani Rautavaara’s “Lost Landscapes: Tanglewood.” Classification: Pretty (and a bit scary at times). Rautavaara is widely regarded as one of the most important Finnish composers since Jean Sibelius. Robert Kurzinger writes that Rautavaara “combines modal, atonal, and textural elements without prejudice in order to achieve the most direct expressive result.” And it sounds like Kurzinger is right. Indeed, “Lost Landscapes” is highly expressive from beginning to end, and violinist Samantha Bennett spoke eloquently for the composer on Monday night. Her performance was sweet in articulation and tone and for a moment was reminiscent of Itzhak Perlman’s trademark sound.

“Lost Landscapes” was originally written for piano and violin but was later arranged for solo violin and strings. It demands much of a violinist, and Ms. Bennett was easily up to the task. Her partnership with conductor Marzena Diakun was enlightening and wonderful to behold. It was instructive to see how continual eye contact between conductor and soloist can keep an entire ensemble together. (It happens all the time, but it’s not always easy to see.)

Next was Andreia Pinto-Correia’s “Timaeus.” Classification: Scary and Fun. The composer based this piece on Plato’s dialogues about the creation of the cosmos. That’s a pretty expansive narrative, and the music reflects it. Moments of mystery, menace, and even horror alternate with passages of playful whimsy and, rarely, subtle hints of Penderecki and Stravinsky, all conveyed through a constantly evolving kaleidoscope of color, texture, and percussive emphasis.

Robert Zuidam’s “Tanglewood Concerto” (classification: Fun) was the perfect vehicle for Emanuel Ax to show everyone how much fun he has performing new music with players of the Tanglewood Music Center. But it certainly doesn’t look easy, even for Manny. This demanding piece brims with mystery, whimsy, turmoil, and triumph, all delivered with cinematic power and conviction. There’s plenty of dissonance in this music, but it is richly textured and varied, often flirting dangerously with consonance.

Jacob Druckman’s, “Aureole” (classification: Fun) is dedicated to Leonard Bernstein and draws inspiration from the Kaddish-tune from Bernstein’s Third Symphony. The piece contains many other references to Bernstein’s works, but they might not be obvious to the first-time listener or to someone unfamiliar with Bernstein’s work. Christian Carey writes, “Like all of Druckman’s work, any reference points are skillfully integrated and masterfully orchestrated.” This is valuable insight, as it invites repeated listenings of the piece; there’s much to enjoy in the discovery of its innermost secrets.

Kudos to the curators of this summer’s Festival of Contemporary Music, John Harbison, Michael Gandolfi, and Oliver Knussen. It’s a sure bet their programs will continue to please new-music connoisseurs and give them that kid-in-a-candy-store experience.