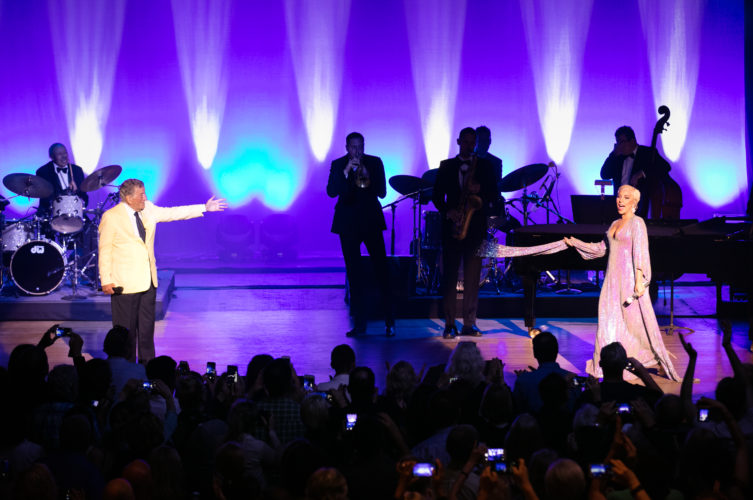 Lenox — A 29-year-old, sexy pop star meeting an 88-year-old crooner could be the foundation for a whimsical movie or Broadway comedy. But in the hands of Lady Gaga (née Stefani Joanne Angelina Germanotta) and Tony Bennett (né Anthony Dominick Benedetto) before a sold-out, wildly enthusiastic crowd at Tanglewood, such was the brilliance of talent, showmanship, choice of songs, sense of swing, and sublime instrumental backing, that they transcended stereotype. Together, they gave a once-in-a-lifetime, deeply satisfying performance, in which each singer played lightly to their expected tropes, even as they relished in the emotional depth and opportunities for spontaneous improvisation in the music of Duke Ellington, Billy Strayhorn, Irving Berlin, George Gershwin, Cole Porter, Michel Legrand, and the legacies of Frank Sinatra, Louis Armstrong, and Edith Piaf.

Sinatra’s voice sounded from overhead once the house lights went down: “Here’s the greatest thing in the world today, Mister Tony Bennett!” And there he stood in a simple outfit of white dinner jacket, white shirt, long black tie, and black trousers as Lady Gaga emerged from stage right wearing a floor-length, silver, sequined gown with a deeply scooped neck.

To a prancing beat from Tony Bennett’s world-class rhythm section of Mike Renzi, piano, Gray Sargent, electric guitar, Marshall Wood, upright bass, and Harold Jones, drums, on the left, along with Lady Gaga’s unnamed septet on the right, they dived into the Cole Porter standard, “Anything Goes,” delighting in its apposite lyrics, which they traded back and forth:

“In olden days, a glimpse of stocking

Was looked on as something shocking.

Good authors too who once knew better words

Now only use four-letter words

Although this video of their “Anything Goes” doesn’t quite capture the intensity of the experience in the Shed, it shows a similar opening of their 2014 show in Brussels.

Note, please, the gloriously swinging jazz accompaniment, their secure rhythm, syncopation, and pitch, delight in one another’s company, and, the contemporary touches, Lady Gaga’s inner-arm trumpet and upper-back dragon tattoos, which became more visible with each successive costume change. This was a higher order of old-meets-young on the stage of song, a standard belted out with energy, sauciness, and creative abandon. As in Brussels, the Tanglewood audience went wild in response.

From here, Lady Gaga began Irving Berlin’s “Cheek to Cheek” in a moderato tempo, impressive in her immense range and controlled vibrato, tossing the song to Bennett with a quick up-tempo shift that established the frame for their faster songs: trading phrases, jumping into spontaneous improvisation, blending together in tight harmony and loose scatting with glissandi, melismas, and riffs aplenty, and vivid contrasts in posture: he frequently moving gently or standing stolidly erect, with subtle hand, arm, and facial gestures, she frolicking about, showing off her dance moves and often, her curves, confident without evident choreography.

Into Gershwin’s “They All Laughed,” the mood brightened still, with stunning pauses and crisply articulated couplets.

Then came a sudden tempo change, and Bennett sang Alexander Borodin’s “Stranger in Paradise” melody from the Polovtsian Dances in the Opera, “Prince Igor,” as adapted for “Kismet” by Robert Wright and George Forrest. His voice was centered with sharp contours and a smoky expressivity in his tessitura, but strained to the point of raspiness as he approached the limits of his range (later ascending to a squeaky but astounding C above middle C). He wove delicious melodic variations over the harmonies, supported by the spare accompaniment piano, bass, and high-hat cymbal. This came across as both intimate and daring. With acceleration in tempo, for the first time in the evening, Bennett sounded his formidable high F in a solid riff, swinging like mad, with impeccable timing. One had the impression that he drew more and more strength from the music as the song, and indeed, the entire evening, proceeded. It was both inspiring and exalting. So much for the alleged infirmities of age!

In “Nature Boy,” an exquisite guitar solo by Gray Sargent, who “cuddled up to the chords” in his final phrase (as Stephen Holden, the New York Times critic, eloquently described his style a few years back), served as a prelude to one of Lady Gaga’s more impressive feats of vocal and harmonic virtuosity, a spellbinding jump from her middle register to a high D appoggiatura, descending to a perfectly tuned high, effortless, legato A B-flat A phrase over the melody line.

After a quick costume change to a blue jacket with a white tee shirt, knotted in the back, Lady Gaga presented Sonny Bono’s “Bang Bang (My Baby Shot Me Down”), ending with a vivid red silk handkerchief spreading across her chest. If there was any doubt about her classical vocal formation, it was dispelled here, in consistent tonality across a broad range, balanced phrasing, unprepossessing power, and nuanced dynamics around the tragic text.

You can get a vivid sense of this fine artistry in another performance of “Bang, Bang,” yet again not quite up to the experience of listening in person.

Before singing Charlie Chaplin’s richly ironic song, “Smile,” Bennett mentioned that after he discovered the song and made a hit recording of it, he received a nice letter from Switzerland in which Chaplin thanked him “for making my song famous again.”

Chaplin would be 116 years old today, he observed whimsically, leaving it to the audience to do the calculus. (Chaplin lived from 1889 to 1977, and Bennett’s hit was recorded in 1959, when he was 33.) The performance was bittersweet, beginning slow, mellow, and low, with ascending lines and mounting intensity up to the the stunning line, “You’ll find that life is still worthwhile,” with emphasis on a passionate, high A, before its resolution in the final cadence. Its slight tremulousness gave an extra sense of existential truth. Would that Tony Bennett could live to 116!

Further highlights included an extraordinary parade of revealing outfits that appeared to recall the French cabaret tradition of Josephine Baker.

One, a red, see-through lace confection, featured a bare bodice adorned with sparkly pasties. Another, a pink taffeta number with a large pink bow, showed off the trumpet tattoo inside Lady Gaga’s right arm.

After this entry, Lady Gaga gave a touching and convincing evocation of “La Vie en Rose.” Without mimicking Edith Piaf, her own slightly nasal speaking voice uttered words that might have emerged from Piaf’s mouth. “In my opinion,” she said softly, “lives that are more dangerous are more fun. Badass! Shit!” And then she began to sing the indelibly sad introductory verse in well-enunciated French:

(“With eyes which make mine lower,

A smile which is lost on his lips,

Of the man to whom I belong.”)

Here’s a similar version (click here), with Lady Gaga wearing the same pink gown. Filmed last month in London, with a nice dedication to a British children’s service organization that she favors, this also includes another bit of incidental, unexpected profanity, as she suggests that if members of the audience could afford the ticket to her show, they could spare a small charitable contribution.

To your reviewer, well accustomed to the ribald humor that often accompanies jazz performances, these vulgar expostulations made no sense and contradicted the over-arching beauty of the evening. Such care went into Lady Gaga’s presentation, her hair, her gowning and ornamentation, even as she appeared to do all possible to complement Tony Bennett’s graceful and elegant performance. This suggests some ambivalence toward her audience on the part of a young woman who has achieved great fame and wealth, yet is sensitive to others in need.

The evening drew to a close after Bennett’s magnificent performance of “How Do You Keep the Music Playing,” by Marilyn Bergman and Michel Legrand, a sensitive reflection on music as a metaphor for life’s long struggles for love and fulfillment. Through the entire performance, Bennett frequently punctuated his songs with spoken, often perspicacious, thoughts and memories. Such an intimate sense of conversation, and confident self-disclosure, is without question one the charming hallmarks of his legacy.

Here’s another, equally gorgeous version of “How Do You Keep The Music Playing,” with the same band, and many glimpses of the redoubtable guitarist, Gray Sargent, filmed in England in 2012.

From “I Left My Heart in San Francisco” to
“I Can’t Give You Anything But Love,” through a touching treatment of “But Beautiful, “ in which Tony Bennett turned to Lady Gaga and asked sweetly, “She sings beautiful, doesn’t she?”(followed by yet another eloquent guitar solo by Gray Sargent), to Gershwin’s “The Lady is a Tramp,” a veritable hit parade brought the show to a close. Duke Ellington’s “It Don’t Mean a Thing if it Ain’t Got That Swing” served as the icing on the cake. There were so many generous servings, and the huge audience left the shed after a final ovation, smiling and fulfilled.