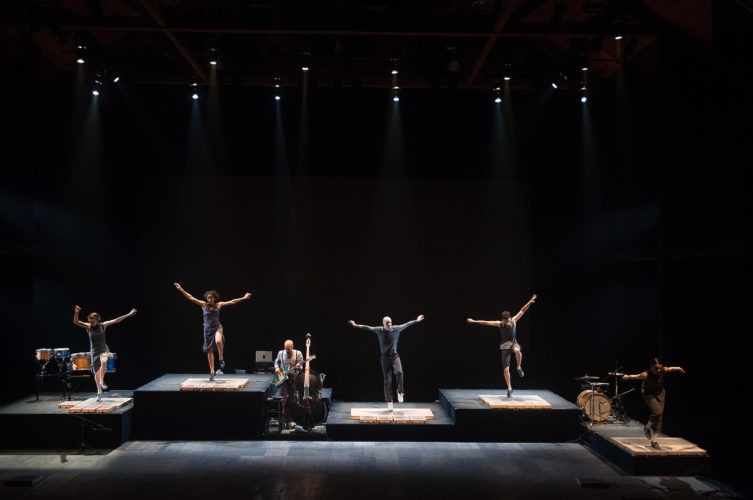 This spellbinding show opened in total darkness in the Doris Duke Theater at Jacob’s Pillow on July 18. A spotlight rose on a single dancer, striking first one toe-tap and then another on a 5-foot-square, resonant platform, in front of which was a row of tiles. She slowly built a syncopated rhythm. When she tapped a musical tile, it responded instantly with a brief musical tone. The rhythm, including her single note, became a riff (a repeated rhythmic pattern).

Another spotlight found another dancer. Standing on a similar platform, she layered her own riff upon the first, with its own tapped note. Then another spotlight, another dancer, yet a new riff, and yet another note. And another. And another, with more and more intense and swinging individual contributions, elevating the essential elements of the riff to a polyrhythmic, syncopated texture. No doubt, this was the start of a new kind of dance recital, looking back on an old African-American art form with its jazz and show biz extensions, and forward to realizing the fabulous potential of tap and contemporary music.

In her introductory remarks, Ella Baff, the Executive and Artistic Director of the Pillow, noted that the production was created in part during Michelle Dorrance’s Creative Development Residency. It featured, she asserted, dancers who “are musicians with their bodies, head to toe.”

Two of these extraordinary dancers are also accomplished percussionists on twin trap sets, and one, Aaron Marcellus, is an accomplished gospel baritone. All are brilliant improvisers as well as attentive listeners to their colleagues’ and partners’ offerings.

Throughout the show, two unusual choreographic devices brought continuing surprises and delights. First, darkness brought rhythm and sound to the forefront. And while most of the rhythms were easily apprehensible – swinging, jazzy, and funk-inflected – the sounds were astonishingly varied: a panoply of delicious noises, soft, sweet, crackling, from-the-movies extraterrestrial, and natural and electronically enhanced variations on the baritone voice. The instruments used to create these sounds in real time included tap platforms and transducers, chains, and rough and smooth surfaces, stoking vivid auditory memories of their great African-American antecedents, Jimmy Slyde (one of Michelle Dorrance’s inspirations and whom Savion Glover reverently called “Moses”), Sandman Slim, and Peg Leg Bates. (Their very names give a sense of their trademark techniques.)

The second device was an open-hearted opportunity for solo, and especially duo, improvisation. Each of the dancer/musicians brought a distinctive sense of style to the tapping: hip-hop moves beyond what you’d ever see on a sidewalk, acrobatic jumps and flips, sensuous slow sinewy stretches, dynamic shifts from pianissimo to fortissimo in a space of seconds, and a dizzying array of partnering deriving from classical ballet and jazz tropes, from the Lindy hop to Saturday Night Fever. Some of the solo and duo improvisations toward the end of the show employed long, hand-held Wii remotes that, when pointed and pressed, sounded whistles, buzzers, and fabulous cascades of electronic notes.

In the course of the evening, there were many inspired pairings that resonated to the great tap dance archetypes, including the Nicholas Brothers, Little Buck and Peg Leg Bates, Buck and Bubbles, among others.

By fortuitous circumstance, an article, The End of ‘Genius’, appeared the day after this show in the Sunday New York Times, in which Joshua Wolf Shenk dispelled the myth of “the lone genius.”

“The pair is the primary creative unit — not just because pairs produce such a staggering amount of work but also because they help us to grasp the concept of dialectical exchange. At its heart, the creative process itself is about a push and pull between two entities, two cultures or traditions, or two people, or even a single person and the voice inside her head. Indeed, thinking itself is a kind of download of dialogue between ourselves and others. And when we listen to creative people describe breakthrough moments that occur when they are alone, they often mention the sensation of having a conversation in their own minds.”

In this vein, Michelle Dorrance wrote the following in the evening’s Artist Statement.

“None of this work is remotely possible without tap dancer, percussionist, and innovator, my long-time friend, Nicholas Van Young. He is the man behind the curtain. He has been developing the instruments you see here and has been experimenting with the technologies you will see at work for years in order to make this work possible.”

In his own program note, her collaborator, Nicholas Van Young, described the dialectical exchange that developed so gloriously into this remarkable performance:

“It started with the simple need to find a way to amplify tap dance without feedback, so I could dance with a live band. Many people have used contact microphones (Gregory Hines, Tap Dogs, etc.) so I knew that was a possibility, and it led me to experimenting with guitar pedals and effects. I started out looping hand and body percussion, with live and affected tap dance . . .I got the idea to create small trigger boards to dance on – essentially wooden drum pads. . . I was creating solos with my ‘Compositional Tap Instrument’ but had visions of several dancers across a number of platforms and boards. Dancing out elaborate choreographed phrases while simultaneously playing the musical composition. Once Michelle asked me to collaborate on this show, I knew it “was on.” Her expansive creativity in tap choreography and movement, along with her sophisticated musical phrasing, started to unlock possibilities in our set that were getting us both so excited. Simple ideas led to large discoveries, and every time we workshopped an idea, 20 or more were born. . .In some ways, we have created the ultimate tap dancers’ playground, where you can let your imagination and your feet run wild.”

Only the dancers’ feet didn’t exactly “run wild.” As exuberant and crazy were some of the acrobatics, challenges, and improvisatory risks, all was in the service of a well-conceptualized notion of dance, organized within physical framings such as platforms and washboards and chains; choreographical set-pieces in which dancers enacted romantic and competitive themes; and thoughtfully planned spaces for original improvisation. If anything, this was a process of creative exploration within explicitly articulated boundaries. In the seeking of original expression, the dancer-musicians bumped up against the figurative walls, nobly transcending them, finding new sources of inspiration and connection.

First, the Nicholas Brothers in “Stormy Weather” (Fred Astaire is said to have called this “the greatest tap dance number ever filmed.”)

The British children’s storywriter, Lauren Child, expressed well the notion of creative seeking that we witnessed in this memorable evening:

“We were given: Two hands to hold. Two legs to walk. Two eyes to see. Two ears to listen. But why only one heart? Because the other was given to someone else. For us to find.”

Michelle Dorrance and Nicholas Van Young certainly found one another’s hearts – and the Jacob’s Pillow audience’s – as well. Their and their colleagues’ delighted, grinning bows before the standing, cheering audience, were indeed heartfully welcomed and appreciated.