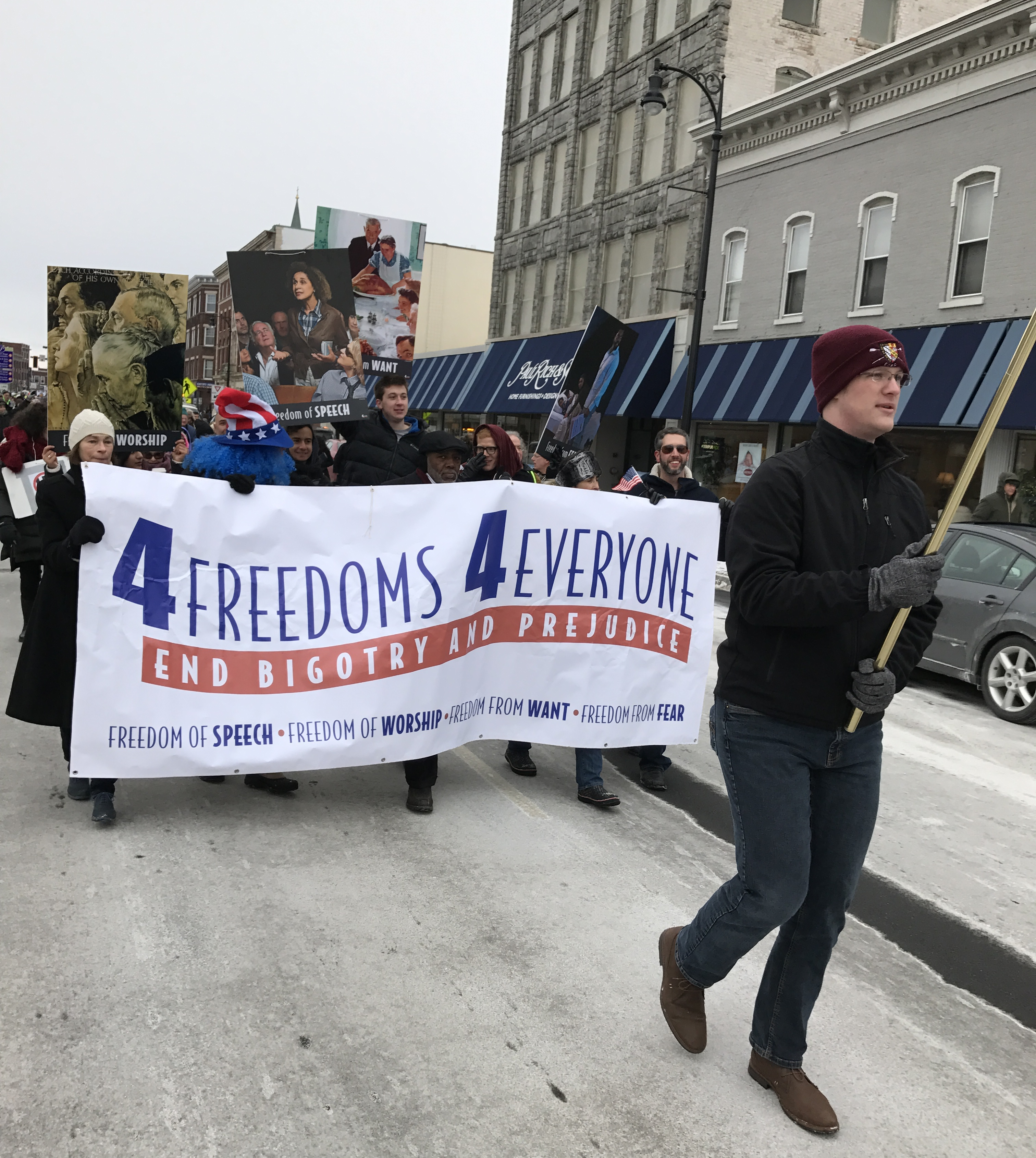 Pittsfield — At precisely 1 p.m. on Saturday (Jan. 7), the first row of what Pittsfield Police estimated to be 2,000 participants stepped off the curb in front of St. Joseph’s Church at 414 North Street, Pittsfield, and proceeded down North Street to the First Church of Christ Congregational on Park Square. Organized by the 4 Freedoms Coalition, the march celebrated the 76th anniversary of the State of the Union address in which Franklin Delano Roosevelt delineated the Four Freedoms – freedom of speech, freedom of worship, freedom from want, and freedom from fear. To listen to FDR’s speech, click on this video link.

The coalition had brought together members of the community to protest hate and bigotry in all forms. As of January 6, this Coalition counted more than 150 community partners, including the City of Pittsfield, elected officials, local businesses, media outlets, local non-profits and religious institutions. Click here for a list of partners.

The peaceful but resolute march turned the corner onto Park Square and filed into the First Church of Christ Congregational for a line-up of speakers representing the many sectors of the Coalition. The Reverend James Lumsden welcomed marchers to his church. He introduced the Reverend Sheila Sholes-Ross, Mistress of Ceremonies, who retitled her role, to be both Mistress of Commitment (because she wanted all attendees to leave the event committed to further action) and Mistress of Cooperation (because she wanted all the ensuing speakers to cooperate with the rule that they limit their remarks to three minutes.)

And cooperate they did, with clear and succinct messages. Mayor Linda Tyer led off by declaring her city of Pittsfield to be a place of tolerance and acceptance. U.S. Sen. Edward Markey followed with a rousing speech, reminding participants that Massachusetts is the place where things begin. “ The American Revolution began here. Opposition to the war in Vietnam began here. The first universal health care began here. The country’s highest minimum wage began here. Let the fight to preserve freedom begin here.”

Similarly stirring remarks came from the diverse roster of speakers who followed: U.S. Congressman Richard E. Neal (“As we start to debate those bedrock guarantees that have made America a much more equitable and better place – Social Security, Medicare, Medicaid and the Affordable Care Act — let’s hope we can bequeath to succeeding generations the good that came to us.”); Ethan Zuckerman, Director of the MIT Center on Civic Media (“The way we achieve freedom from fear is through solidarity.  We need to listen, to speak, and to stand together against fear.”); Ayla Wallace, a student at Miss Hall’s S

chool, offered guidance to her 10-year-old sister who is learning about slavery (“You may have me in chains, but my mind will never be tamed and never will I let my voice and my freedom be denied.”); Attorney Yahirah Amatul-Wadud,

Board member, Massachusetts chapter of the Council on American Islamic Relationships (“Let’s celebrate our pluralism. Let’s increase our religious literacy. Learn what your own beliefs are and learn what others believe in. You’ll start to see that there are more commonalities than differences.”); Attorney James Roosevelt, grandson of F.D.R. (“Today we face unprecedented assaults on each of the four freedoms. We are confronted by a culture of weapons and verbal assaults. It is essential that all Americans rally to protect our democracy. Our leaders and we ourselves must defend the four freedoms.”)

Eleanor Velez, Director of the Berkshire Community College Multicultural Center noted: “I am originally from Mexico, but I am not a rapist or a murderer or a thief. I am basically just a nice person. The American Dream can become the American Nightmare in times of intolerance when immigrants and naturalized citizens are made to feel afraid. We need to remember that, for most of us, underneath the skin is another really nice person.”

Peter Marchetti, Pittsfield City Council president and a representative of the LGBTQ community, quoted Taylor Swift: “Why make miserable for someone when you can use your positive energy for good,” and concluded with his own words: “We know love and respect can overcome hate and intolerance.”

Elizabeth Recko Morrison, 2015 Berkshire Labor Person of the Year, talked about how important it is for schools to educate people to earn a living (“Nothing is more liberating than knowing you can pay your bills.”) and urged citizen action (“We must regain our sense of civic responsibility. We must listen to each other even when people are not talking about our issues. We do not always need to agree to stand united. You are what democracy looks like.”)

And finally, Dennis Powell, President of the Berkshire County Branch of the NAACP, reminded

us that Eleanor Roosevelt referred to the Four Freedoms when advocating for the Universal Declaration of Human Rights, which was adopted by the United Nations in 1948. He concluded the program by exhorting, “Let’s make these four freedoms from 1941 have true meaning in 2017.”

At the end of the program, the Reverend Sheila Sholes-Ross urged all attendees to go to the tables manned by participating organizations and to commit themselves to positive action in the months and years ahead.

To listen to the speeches, beginning with remarks by U.S. Sen. Edward Markey, click here (courtesy of Bill Densmore).