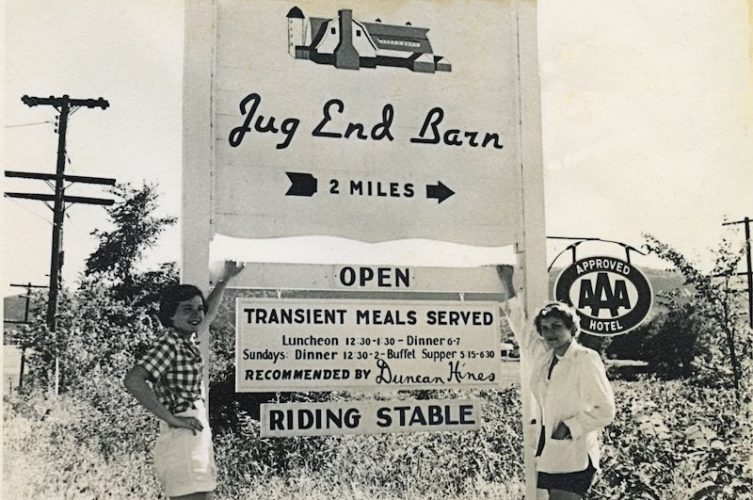 The Jug End Barn sign shown above appeared in a photograph taken in the late 1950s or early 1960s along Route 23 in South Egremont. We have not been able to identify the two women shown in the picture.

According to tradition, a mountainous site in the southwest corner of Egremont was named “Jug End” by early Dutch settlers from New York State. The name is said by some to mean “youth” or “new beginnings.” Jug End Barn was created near the base of the mountain in the 1930s when Major Hugh Smiley converted his dairy barn into an all-season vacation destination. Major Smiley was an engaging entrepreneur whose extended family owned the iconic Mohonk Mountain House Hotel near New Paltz, New York. Major Smiley and several colleagues purchased numerous properties and built cottages in South Egremont during the Depression years. It was his goal to turn the village into a condo-like corporation. His village-wide plan ultimately failed, but Jug End Resort survived.

During the 1950s and ’60s, Jug End provided scores of jobs for local residents, and achieved its greatest fame with popular owners Angus and Mimi MacDonald. With skiing, golf, tennis, dancing, swimming, water skiing at nearby Prospect Lake, and horseback riding, herds of tourists stampeded to the popular vacation barnyard. Successive owners, however, were unable to recapture the magic of the 1960s. By the 1980s, a large condo development was planned for the site, but never materialized. The buildings fell into disrepair and the property was taken over by the Commonwealth of Massachusetts and turned into a public wilderness area.

The photograph below features a present-day Jug End sign located near the same spot on Route 23, close to John Andrews Farmhouse Restaurant. Posing with the sign is Nancy-Fay Hecker, the daughter of former Jug End owners Mimi and Angus MacDonald.