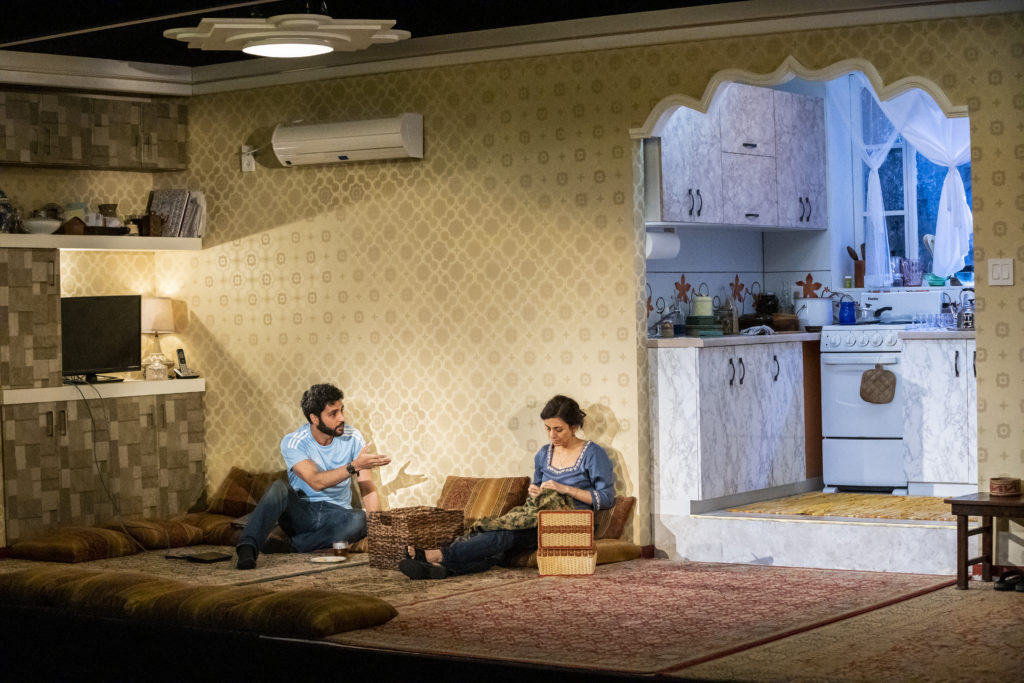 Joseph O'Malley
Babak Tafti as Taroon and Marjan Neshat as Afiya in the Williamstown Theatre Festival production of 'Selling Kabul.'

THEATRE REVIEW: WTF’s riveting ‘Selling Kabul’ is less a play than an experience

The people who inhabit this new play by Sylvia Khoury, having its world-premiere performances now at the Williamstown Theatre Festival, exist in a world in which lies are necessary to preserve both sanity and life. In Afghanistan in 2013, life itself is in jeopardy. The United States is pulling its forces out of that country, and other countries would follow quickly. Afghan men and women who have served as translators for the armed forces are being hunted down by the Taliban and killed for their complicity with the “enemy.” One of them, Taroon, is being hidden from sight by his sister Afiya. On this day, the day of the action in this play, things are coming to a head. It is a very dramatic time for these people, a day they will never forget.

Taroon’s wife is expecting their first child and he cannot be with her due to his situation. Afiya and her husband, Jawid, cannot have children and their goal is to save her brother’s life, reunite him and his wife and child, and see them safely out of the country. Afiya has a plan and she is determined to see it through. Her husband agrees with his wife’s well-conceived plot. Even their neighbors, Omar and Leyla, appear to be in agreement. This is a desperate and exciting time for all of them. But even the best-laid plans can go awry, and things do. 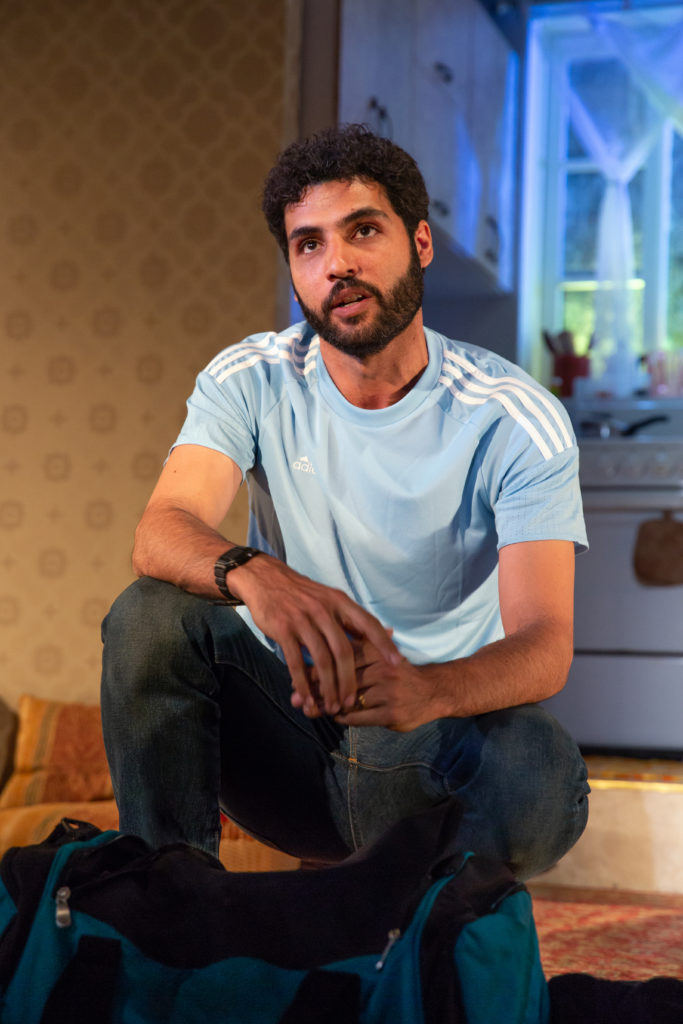 The Taliban are in hot pursuit of Taroon and the threat of discovery is imminent. Afiya lies to Leyla about the whereabouts of her brother and this results in the instant killing of Omar. From that point onward, this 78-minute play becomes a burst of dramatic flame that cannot be quenched.

Taroon is played by Babak Tafti, an actor who understands intensity and how to portray it in the simplest, most straightforward manner. From his first appearance to his final exit, there is an undeniable attention being paid to his actions and his reactions. He captures the audience’s attention every time he moves or speaks. He is perfectly cast in this role.

His combination of situations—the need to hide, the mode of hiding, the anxiety over his wife’s health and that of their baby to come—is often riveting. Partly it is his visible youth that compels our interest; at other times it is the portrait of his situation alone. Either way, he is a hero of heroic proportions and this play’s center. Those necessary lies used to support him are made all the more important because Tafti’s performance makes us like him so very much. 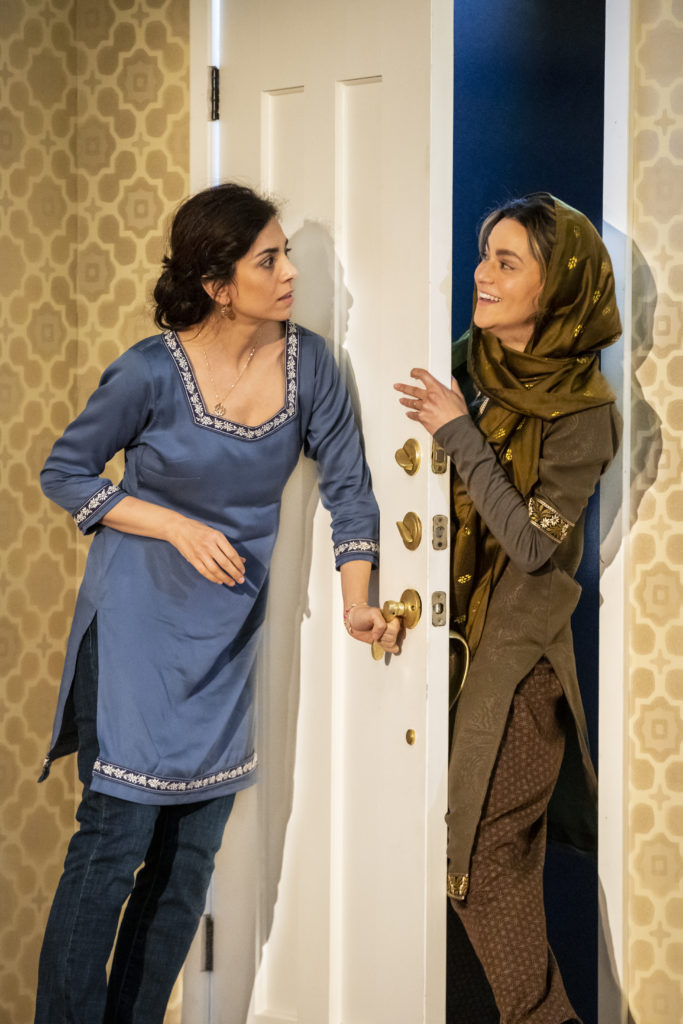 Marjan Neshat as Afiya and May Calamawy as Leyla in the Williamstown Theatre Festival production of ‘Selling Kabul.’ Photo: Joseph O’Malley

Once the neighbor enters the picture, things become much more complicated. She is played by May Calamawy, a beautiful and graceful actress who adds the image of tension to the picture before us. Afiya uses her to convey the wrong information, another lie, to the Taliban and then must persuade her to be saved by the plan she has concocted. Calamawy provides some humor and some high drama in the play, and she does both with an almost outrageous honesty. Her final moments in the play add to the already growing tension.

As Afiya, Marjan Neshat is the liar-in-chief and the actual heroine of the day. Neshat manages to make both aspects of her character reasonable and right as she adopts a simplicity that carries Afiya through unscathed. That she feels personally guilty for what occurs is right, and Neshat adds remorse to her myriad of moods and intentions, remarkably subsuming her guilt into her pride. This is a lot to work with in a short, increasingly tense period of activity. She handles it well.

The fourth character is Afiya’s husband, Jawid, played with grace by Omid Abtahi. He is a sensitive man, deeply in love with his wife and his country, and willing to do anything Afiya wants. Ultimately it is his idea to bring her the family she so desperately needs. Abtahi plays an accomplice willing to put his own life in jeopardy to save his brother-in-law. His Jawid is unable to tell a lie, but he can play the lie for all it is worth to keep Afiya safe. The quietest character in the play, he brings home to Taroon and Afiya news he chooses to share in part until he must reveal the whole truth or die from concealing it. He has the most moving moment in the play and he plays it perfectly. 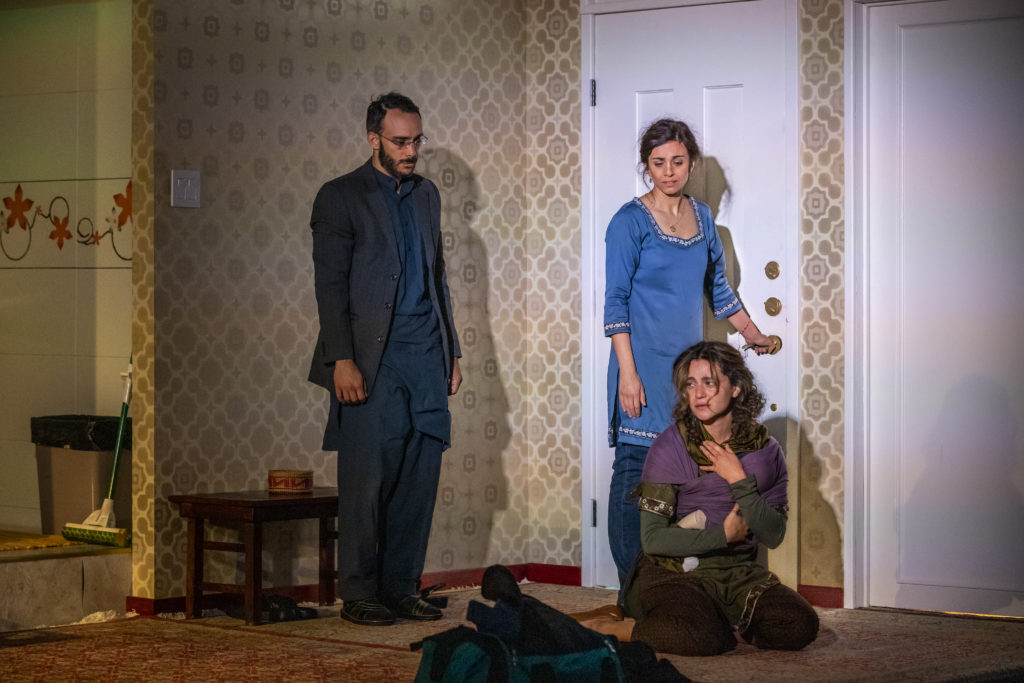 Omid Abtahi as Jawid, Marjan Neshat as Afiya and May Calamawy as Leyla in the Williamstown Theatre Festival production of ‘Selling Kabul.’ Photo: Joseph O’Malley

Arnulfo Maldonado’s set is evocative and Dina El-Aziz’s costumes are ideal for these characters. Jen Schriver’s lighting gives us place and action, but not necessarily time of day, which I found a bit confusing. Beth Lake’s sound design work was amazing. This team has aided Tyne Rafaeli in telling the story. Rafeli’s direction often allows the cast to underplay the tensions of the moment, but for the last 20 minutes or so of the play, she has given them exactly what they need to create the discordant anxiety the play needs.

This is a fascinating play, a look at a world we know from the TV news but never have really been exposed to in a realistic way before. The Taliban are just outside the apartment door; we don’t see them, but we know they’re there. It’s less a play, really, than an experience.

Selling Kabul plays on the Nikos Stage at the Williamstown Theatre Festival in the ’62 Center for Theater and Dance Williams College, 1000 Main St., Williamstown, Massachusetts, through Saturday, July 20. For information and tickets, see the Berkshire Edge calendar, call the box office at (413) 458-3253 or go to wtfestival.org.