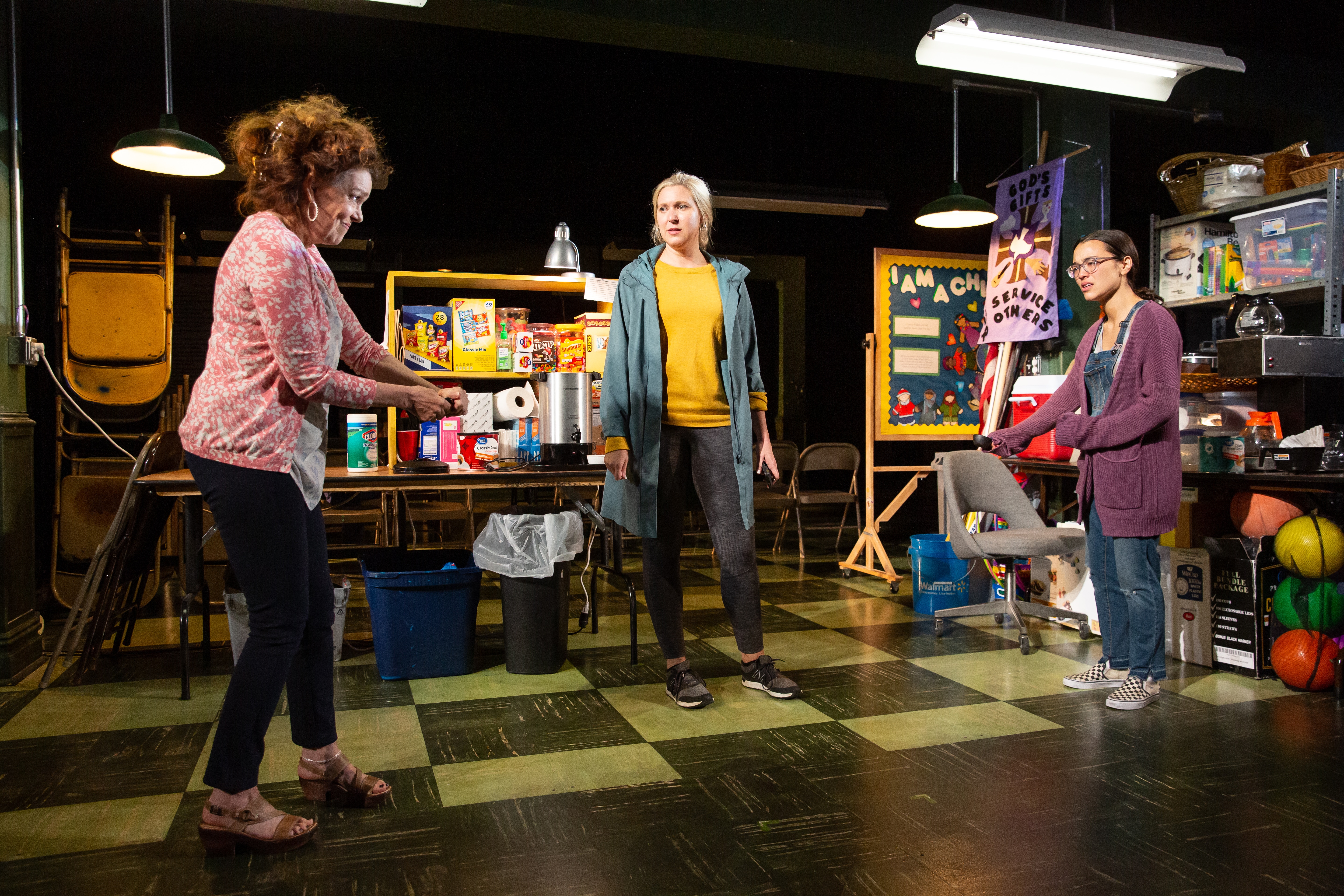 Deirdre O'Connell, Cassie Beck and Midori Francis in the Williamstown Theatre Festival production of 'Before the Meeting.' Photo: Jeremy Daniel

Before the Meeting
By Adam Bock
Directed by Trip Cullman

Three people meet consistently at their Alcoholics Anonymous meetings in the basement of St. Stephen’s Church. They not only serve as the coffee committee, they commit to making decisions about procedure and setup and other small issues that, to them, are major. One night they are joined by a new member, who has other issues that he needs to get to; somehow, he cannot even express them. But that is not the big issue for Gail, the oldest member of the group. She has older troubles she needs to reach and also cannot get them out, even in the protected environment she dominates.

Gail has the difficult task of holding the stage for a long, long while. As open as she seems to be, there are difficulties in her life that she cannot discuss: the death of her son; the troubled atmosphere of her relationship with her daughter; her grandchild’s long-reaching difficulties; and, of course, her own deficiencies when it comes to her addictive personality. She is a friend, mentor and sponsor of a young woman, Nicole, and she has a good friend in Ron. So when Tim, a very troubled black youth joins them, he is both welcome and a distraction for Gail. In the multiple scenes in Adam Bock’s play, all of them set during the minutes before the AA meetings begin, Gail gets to deal with each and every one of her chums and ultimately with her daughter who has cut Gail out of her life and out of her family.

This is another world-premiere production for Williamstown Theatre Festival (five out of eight productions this season). A difficult topic and a difficult play, this one is a very challenging event worth a visit while you can see it here and now. Though I believe there is still some work to be done, particularly in Gail’s long and laborious monologue, the play’s dramatic scenes are scathing and rewarding, especially with this particular acting company.

Deirdre O’Connell as Gail is terrific. She never overplays the angst that is associated with this character. Instead she is just the boozy-based mother figure who cannot resist offering help, guidance, advice and a shoulder to cry on when necessary. O’Connell is wonderful and is almost never offstage, but somehow she must be, for she changes costumes at least twice.

Midori Francis as her youthful chum, Nicole, is an often depressed, sometimes petulant person who provides her own cheering section with a quiet voice that cannot provide what she needs, not even with her constant barrage of sad jokes about alcoholics and addicts. She does wonderfully well with this role. You almost fall in love with her until she falls afoul with her boyfriend and her mother; then you just empathize and sympathize until you can’t stand it any longer.

Ron is disturbed by the waste of his life and his sad relationships. Arnie Burton brings a high level of reality to the role and his honesty is so great that it becomes difficult to separate the actor from the role. He makes it as real a performance as possible and that’s just great. It’s also hard, very hard indeed, to keep Ron on your prayer list, for he seems much better than his addictions but he’s never forthcoming enough to be sure.

Tim arrives, hides, makes inroads into the group, disappears and then reappears much worse than when he first showed up. In spite of Gail’s efforts with him, there is something of the hopelessness of an addictive personality in Tim, and Kyle Beltran gets that exactly right in his portrayal. Beltran’s sensitive face and his quavering hands provide a much-needed dramatic moment toward the end of the play that I found very moving.

However, it is Gail’s encounter with her estranged daughter, Angela, that dominates the play. Here is the dominant relationship that has no way out of its dilemma, no possible egress. Cassie Beck brings a different set of emotions onto the stage in this role. Her Angela has struggled with emotional loss and physical losses and her goal—protecting her daughter from her mother—has clearly cost her almost as much as her mother’s addictions have cost Gail. Their scene is the dramatic highpoint of the play, with Midori Francis suffering as a witness to this persecution of Gail, the imperfect human being whose story is being told in this play.

Trip Cullman has directed the company with strength and with vigor and even their silences, their lulls, add a great deal to our understanding of them. Cullman does silence better than most directors, and he allows the actors to convey their difficulties at the same time he allows the audience to experience the hardships these people suffer in their need for change, comfort and growth.

The physical production is excellent with a set by Mark Wendland, costumes by Sarah Laux, lighting by Jen Schriever and sound by Darron L. West. The show was beautifully called and stage-managed by Clarissa Marie Ligon.

It’s a hard 76 minutes, but it’s worth the effort, for the show reveals the souls of its characters, and you don’t always get to see that much of a human being who suffers.

Before the Meeting plays on the Nikos Stage at the Williamstown Theatre Festival in Williams College’s ’62 Center for Theatre and Dance, 1000 Main St., Williamstown, Massachusetts, through Sunday, Aug. 18. For information and tickets, see the Berkshire Edge calendar, call the box office at (413) 458-3253 or go to wtfestival.org.