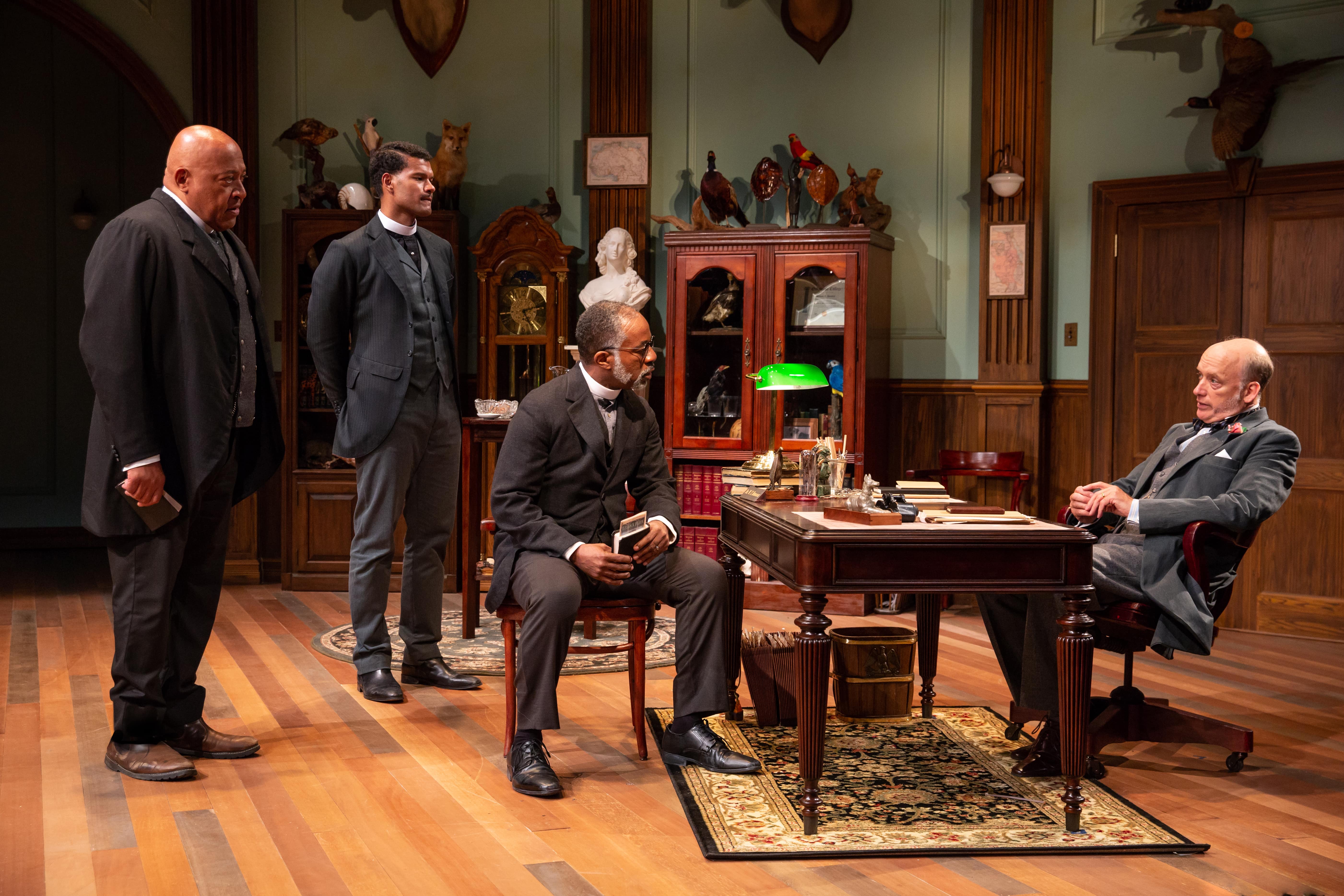 A Human Being, of a Sort
By Jonathan Payne
Directed by Whitney White

“Do you know no one can know what is in here?”

Thousands of people flocked to the Bronx Zoo in 1906 to see the Congolese Pygmy on display there. His name was Ota Benga; he was fierce; he was exhibited with monkeys and orangutans; his display in a cage outraged the Black community. The new play “A Human Being, of a Sort” by Jonathan Payne, having its world premiere at the Williamstown Theatre Festival, asks many questions about his abuse at the hands of the white men he initially trusted. It also addresses the relationship between Ota Benga and one of his keepers, a black convict on a trial release, who finds the humanity in his human captive.

It’s an unusual experience to have WTF open a season with two plays on its stages dealing with Black subject matter. With two excellent productions and two fine casts, that is how 2019 has started. This play, on the Nikos Stage, is new and extremely interesting, though not always completely successful. It is the story of a Congolese Pygmy, a “guest” of the Bronx Zoo, displayed for the public to see. He is treated like an animal, caged and provided with food and drink, provided with zookeeper guards. For the zoo’s manager, the man is only barely human and only just barely allowed to exist as a human being. Through an arrangement with a friend who operates a prison in the South, he brings in a convict to act as the Pygmy’s principal guard. The prisoner, whose full release depends on how he handles his charge, is talkative, quirky, pragmatic and totally interested in making this opportunity toward freedom work. There’s just one problem: He begins to sympathize with the plight of another human being incarcerated as he has been.

Playing William Temple Hornaday, the cantankerous, challenging zoo manager, is a marvelous actor named Frank Wood. He has a remarkable, off-hand delivery that makes every line fresh, original and honest, as though he is making them up as he goes along. This brings an uncanny feel of reality to the play.

His three harshest opponents, three important Black clergymen in New York City, are played by Sullivan Jones as Reverend William Slater, Keith Randolph Smith as Reverend George Sims and Jeorge Bennett Watson as Reverend James Gordon. All three men, taking a united front, play their characters with clear and obvious differences, giving them the qualities of the individuals they are while still assuming the role of a conscience choir with a single voice.

Andre Braugher plays the convict/keeper who is assigned to watch over Ota Benga. If there is a more sincere actor, I cannot think of one. Every word out of his mouth sounds like genuine conversation, and that is an art. Author Jonathan Payne has written this character as an honest man, a victim of circumstances not once but often, who can only function in a real world on a real level. Whether in polite conversation, plea-mode with Hornaday or in negotiations with Ota Benga, Braugher keeps it real and emotionally tells the story of Engelholm, his character, from the inside out. This is a memorable performance.

Braugher plays very well with his co-star, Antonio Michael Woodard as Ota Benga. Mostly nude throughout the play, Woodard’s body reflects each and every mood the character experiences, from fear to anger to elation. Much is made of his animal instincts and his teeth, and with his smile, Woodard gives us an impression of what is described. He uses an accent that clearly marks him as unrelated to the world we know, and his movements within his cage environment are sleek and animal-like—the sort of creature you might see in a Universal movie of the 1930s. It is his job to bring the jungle into the city in this play and Woodard manages it with the help of fine director Whitney White, and the co-fight and intimacy directors Claire Warden and Judi Lewis Ockler.

We are shown his massive metal cage from two perspectives thanks to Braugher’s easy heft and a turntable unit designed by set designer Lawrence E. Moten III. In fact, Moten’s set, including the manager’s office and the jungles of the Congo, were marvelous within the context of this play.

The final character, seen only in the final scene but spoken of often throughout the play, is Samuel Phillips Verner, the man who found, “captured” and brought to America the Congolese Pygmy, Ota Benga. He is played here by Matthew Saldivar in a soft, cajoling manner that instills both confidence and fear as he slowly approaches Benga from behind. One problem with this play is that this ending doesn’t work as well as it might and I think, if this scene could be located within the body of the play, it might smooth out some of the difficult transitions for the audience trying to understand just how such a thing could have come about in the first place. We hear a lot today about America’s history of slavery and while this is not the same thing, it actually is for a human being who has been removed from his native place and used for the gains of others and not himself. It is a theme common with “A Raisin in the Sun,” the play that opened the other stage in Williamstown at the same time as this one.

Kudos to the designers: Tilly Grimes for exquisite costumes, Amith Chandrashaker for the lighting, Sina Refik Zafar for the excellent sound design and Barbara Rubin for her dialect coaching—and especially to Whitney White for directing this dark, intriguing play.

A Human Being, of a Sort plays on the Nikos Stage at the Williamstown Theatre Festival in the ’62 Center for Theatre and Dance at Williams College, 1000 Main St., Williamstown, Massachusetts, through Sunday, July 7. For information and tickets, see the Berkshire Edge calendar, call the box office at (413) 458-3253 or go to wtfestival.org.