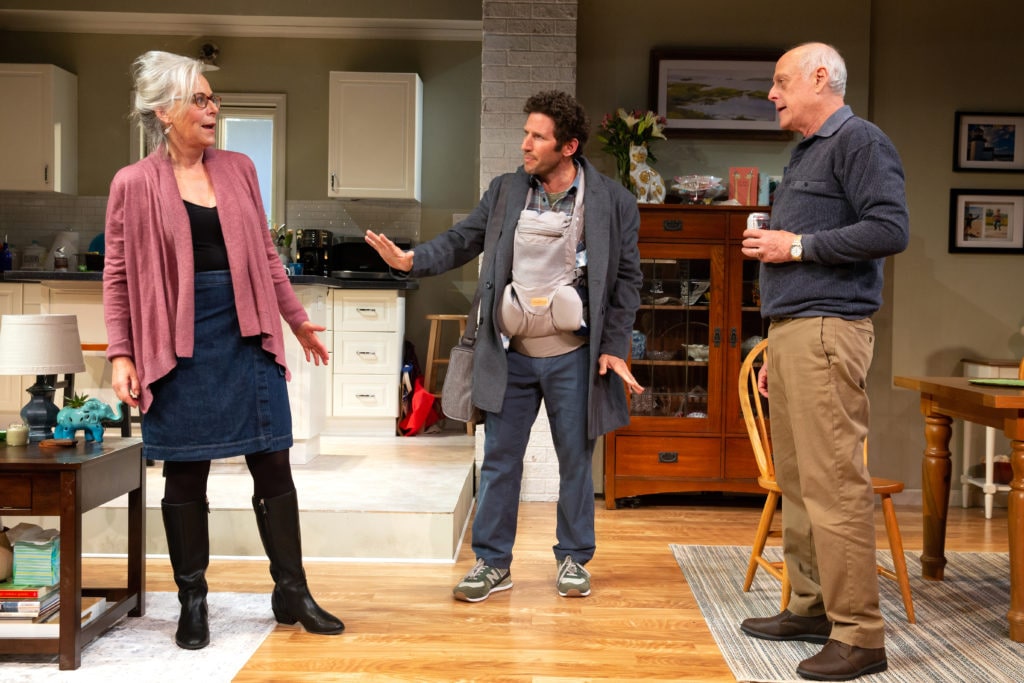 Jeremy Daniel
Jane Kaczmarek as Diana, Mark Feuerstein as Nate and Mark Blum as Sol in the Williamstown Theatre Festival production of 'Tell Me I'm Not Crazy.'

THEATRE REVIEW: With laughs aplenty, WTF’s ‘Tell Me I’m Not Crazy’ takes on a serious subject

“When you’re not here, it’s not hard to imagine you’re gone.”

Diana, played by Jane Kaczmarek, speaks those words to her husband who has abandoned rational thinking and has taken up guns as a pastime, as a hobby, as a way of protecting his home and family. It has become an obsession with him and the dangers Diana sees in this truly frighten her. She can understand what has prompted his actions but she cannot live within a house containing a deadly weapon; it is just against her concept of life. For the second show in a row at the Williamstown Theatre Festival (“Grand Horizons,” which is not available for critics, is the other one), a long-term marriage is disrupted over a single issue.

This play is a comedy and there are laughs aplenty, but it takes on the serious subject of gun abuse. Sol and Diana live in the suburbs and Nate and his wife live in the city. Their homes are very much alike; perhaps Nate’s tastes have been shaped by his mother’s. Sol has developed a fear of his formerly safe neighborhood: There are “hooligans” breaking into homes. Without consulting his wife, Sol has bought a gun and is learning to shoot it. When she and Nate find out about this, they go ballistic (though without guns). Nate fears for the safety of his children when they visit their grandparents and Diana fears for herself when she comes home one day to find the terrified Sol aiming the gun at her. The eventual and inevitable reference to craziness takes over the rest of the play and the motivations of all four of its characters. 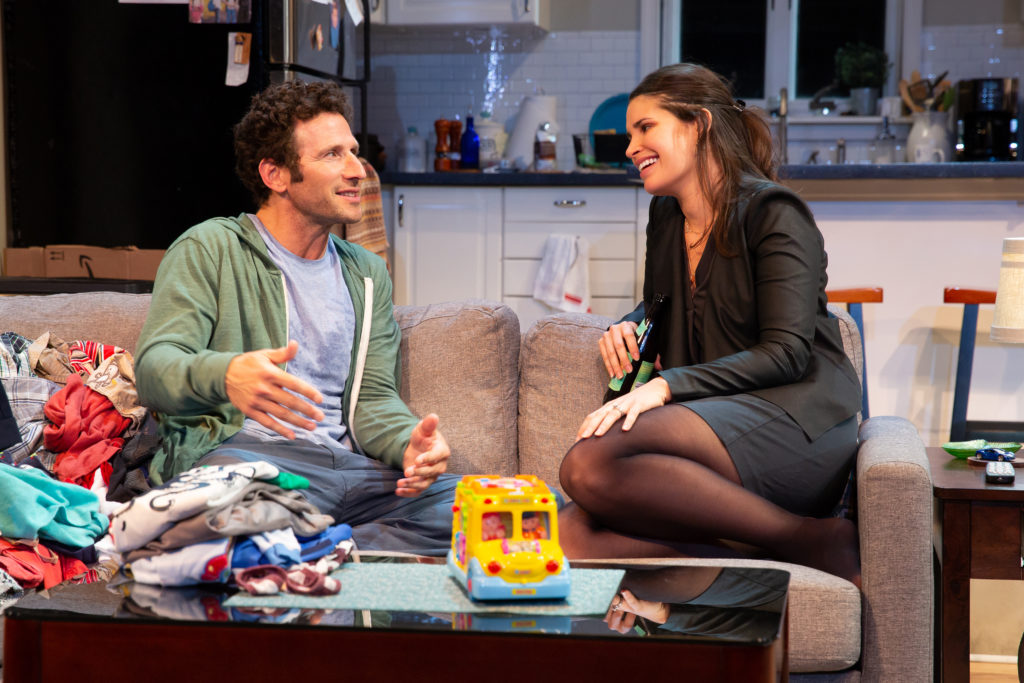 Mark Feuerstein as Nate and Nicole Villamil as Alisa in the Williamstown Theatre Festival production of ‘Tell Me I’m Not Crazy.’ Photo: Jeremy Daniel

The issue disturbs Nate’s wife, Alisa, who brings race prejudice into the mix, which I think is an unfortunate addition to the basic premise. This play, which is very funny, doesn’t need that addition; it is clear that both Sol and Diana adore her and her children. It muddies the waters in terms of the real issue of the constitutional right to possess a gun. Nicole Villamil, as a working mother with a househusband, is perfectly wonderful in this role. She is emotional and sensual and strong as a post on the issues that affect her. Alisa takes stands and, like her mother-in-law, cannot be swayed. Villamil plays this character’s strength with a loving sensibility and it is just right.

Mark Feuerstein is a delight to watch and listen to as he blusters and contends with the issues that could affect his children and his entire family. He brightens the stage with his sexuality and his presumptive role as a stay-at-home dad. Encountering both parents in their suddenly disastrous marriage, he is torn between them, and Feuerstein plays these levels of loyalty with its third and fourth arms—loyalty to his wife and to his own opinions. Not since the children in Neil Simon’s comedy “Lost in Yonkers” has a younger generation had to deal with so many choices. This wonderful actor faces them all simultaneously, with both dramatic force and comic grace. 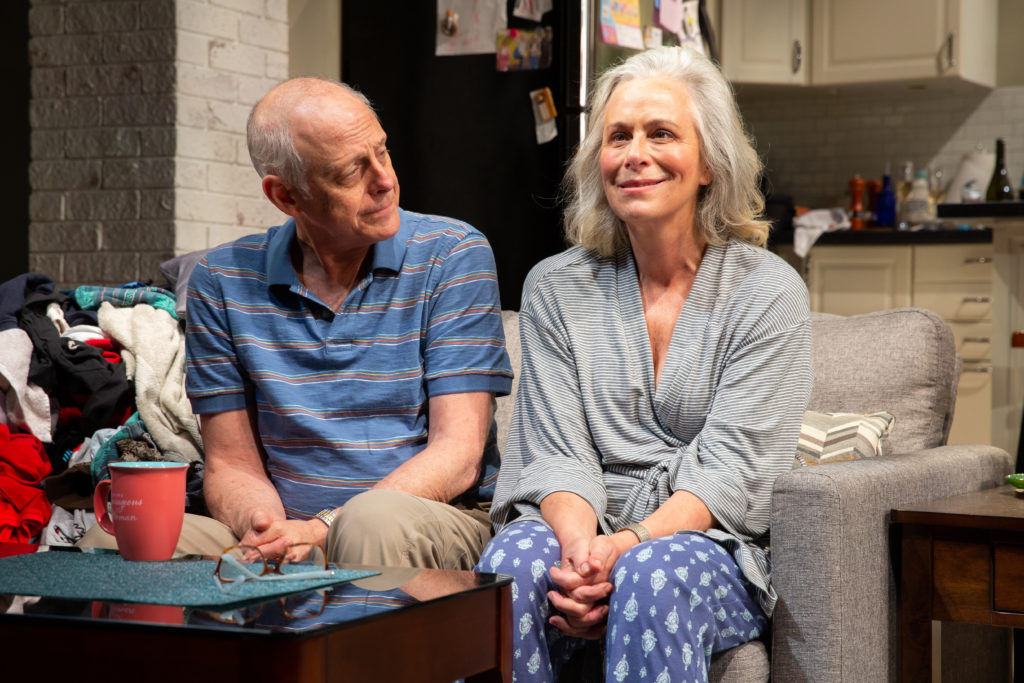 Mark Blum as Sol and Jane Kaczmarek as Diana in the Williamstown Theatre Festival production of ‘Tell Me I’m Not Crazy.’ Photo: Jeremy Daniel

As the authority figure of Sol, Mark Blum does remarkably well, compounding the character’s decision to arm himself for their sakes and their horror at his disruptive and dangerous choice. Blum addresses their reactions with a resolve that is nothing less than stupendous and insistent. Surely this is in the writing. but the human frailty in decision-making is brought home by the actor, who defends Sol’s choices with an honest attack that starts funny but gets hopelessly realistic very quickly. As in Neil Simon’s “Come Blow Your Horn,” his decision to abandon his wife and move in with his son is totally unrealistic. In this case he brings his guns with him, which infuriates the younger couple, as it should. Blum radiates confusion in what should be the play’s second act (this is a one-hour-and-40-minute one-act with a very clear first-act finale and second-act opener).

Kaczmarek is brilliant as the older woman in the quartet. As an actress she has a fine grip on the comedy here, but her dramatic moments can freeze your soul for a moment as she make her very definitive pronouncements. She brings Diana into focus early in the play and she holds fast to the woman she has created. With not one false moment in her presentation of this woman, she adds reality to a situation that could have been farcical. Instead she uses the playwright’s words and actions to make the play solid. 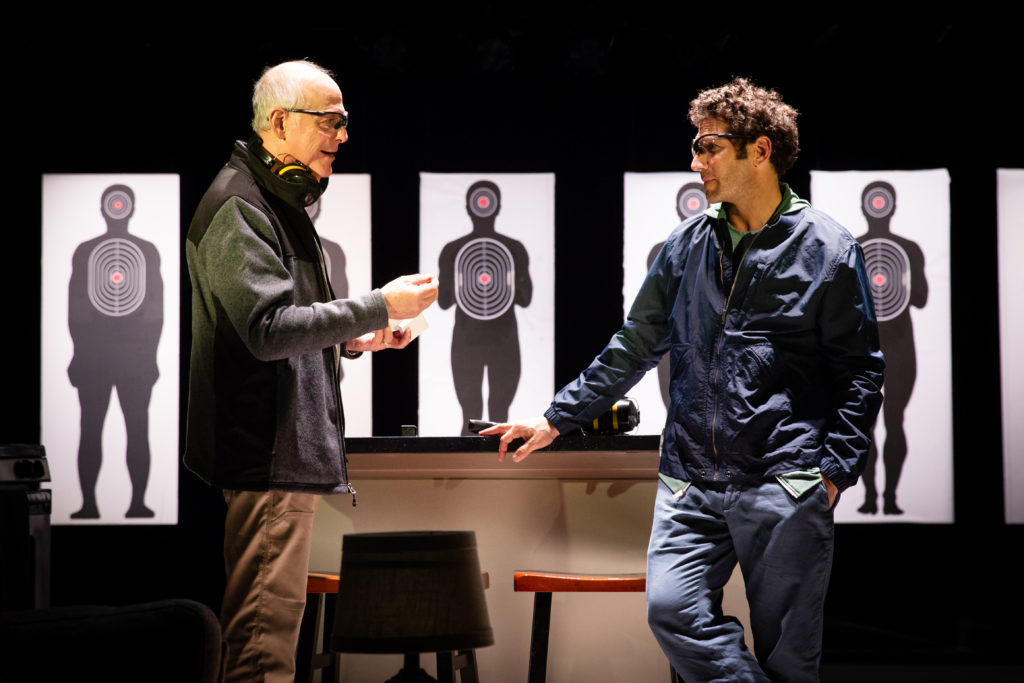 Mark Blum as Sol and Mark Feuerstein as Nate in the Williamstown Theatre Festival production of ‘Tell Me I’m Not Crazy.’ Photo: Jeremy Daniel

The father-son relationship is a vital factor in this play. With more than one scene played out in the shooting range where Sol practices, both men have an opportunity to explore the vastness of such a rapport. These are the finest moments in this play: when human comedy takes over the laughter and reality has a shot at taking over the work itself. This is a fine new play that tackles one too many issues when it has enough with just the guns and the difficulty of rationalizing the parent/child milieu for adults.

The rather cinematic script has been handled beautifully by director Moritz von Stuelpnagel, who justifies things like piles of laundry and noisy toys in both locations with alacrity. Alexander Woodward’s set works for both locales, and the costumes designed by Tilly Grimes define the four characters well, even unto silliness. Isabella Byrd provides lovely lighting that well-defines place and time of day.

Commissioned by Williamstown Theatre Festival, this play will be a welcome addition to the regional theater world in future years, for it deals with an issue that isn’t going away any time soon.

Tell Me I’m Not Crazy plays on the Nikos Stage at the Williamstown Theatre Festival’s ‘62 Center for Theater and Dance, 1000 Main St., Williamstown, Massachusetts, through Saturday, Aug. 3. For information and tickets, see the Berkshire Edge calendar, call the box office at (413) 458-3253 or go to wtfestival.org.