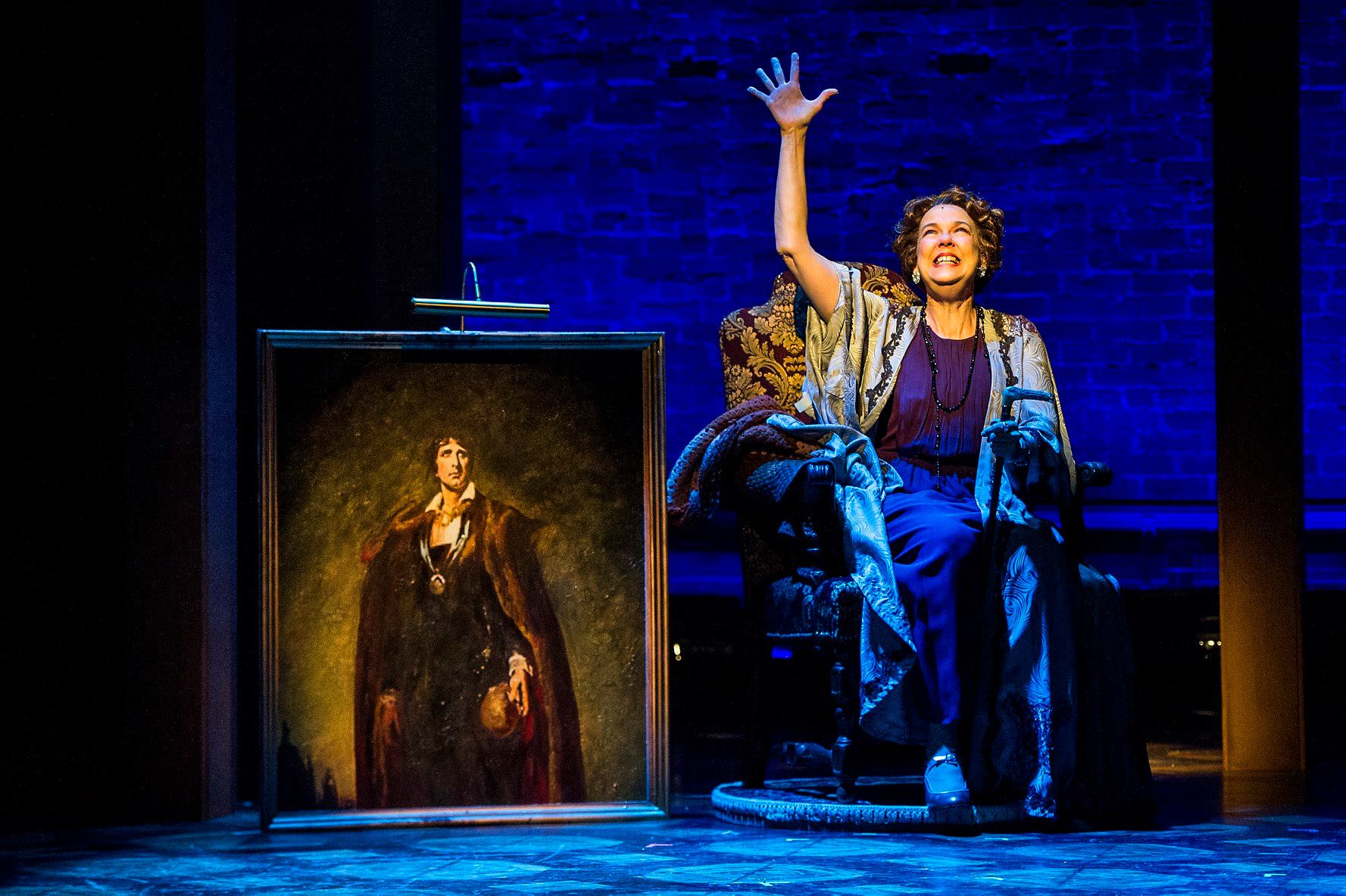 There’s a love letter to the American musical comedy — postmarked Pittsfield, first-class delivery — addressed to Broadway. Barrington Stage Company’s “The Royal Family of Broadway” combines a powerhouse of creative talent and a large, top-drawer cast in an impressive, delightfully entertaining world premiere: the best original musical staged in the Berkshires theater scene yet.

Start with a good, old-fashioned comedy by playwright and humorist George S. Kaufman and author Edna Ferber. Add in a marvelous score by Tony Award-winning BSC resident artist William Finn (“Falsettos,” “The 25thAnnual Putnam County Spelling Bee”) and a snappy, new book by Rachel Sheinkin (“The 25thAnnual Putnam County Spelling Bee”). Mix in the dynamic-duo skills of director John Rando and choreographer Joshua Bergasse (both of “On the Town” and “Pirates of Penzance” from past BSC seasons). Finish with a perfectly cast Tony- and Olivier-winning ensemble. Serve a delicious, frothy and sophisticated cocktail of musical comedy just in time for the summer.

Based on Kaufman and Ferber’s “The Royals” (1927) that poked fun at the Barrymores, America’s first family of the theatre (and an adaptation by Tony winner Richard Greenberg), the BSC musical version, set in a Manhattan duplex apartment in 1927, finds the widowed matriarch of the Cavendish stage clan, the ailing actress Fanny (hilariously played by Tony winner Harriet Harris) keeping the flame of her world-famous actor husband burning by Mama Rose-ing the stage careers—and private lives—of her daughter, Broadway diva Julie (Laura Michelle Kelly, Olivier Award for the West End’s “Mary Poppins”) and Julie’s daughter and successor in the wings, budding actress Gwen (charmingly played by Hayley Podschun).

Love throws a wrench into Fanny’s best-laid plans for daughter and granddaughter when men enter their lives. For Julie, it’s a former lover and now millionaire Gil (last year in BSC’s “Broadway Bounty Hunter”), who pops-in from Brazil where he’s made a fortune. For Gwen, it’s Perry, a nice, “normal” young man in finance (played by A.J. Shively, who matches Podschun’s charm) who’s useless to single-minded Fanny. A prodigal, egomaniacal womanizing actor son Tony (played over-the-top, appropriately, by BSC favorite Will Swenson) unexpectedly arrives on the scene. Fanny’s brother and sister-in-law, Bert and Kitty (played like a pair of lovable screwballs by Arnie Burton and Kathryn Fitzgerald) threaten the Cavendish professional reputation with a stinker of a new show, despite the best efforts of long suffering business manager Oscar (executed with mensch perfection by Chip Zien) to avert disaster.

Will Fanny survive all this drama and realize her dream for her daughters? Will she preserve the family tradition? Will Cavendish women choose marriage over stage?  All is revealed comically and, in the end, touchingly, too.

Sheinkin’s book wastes no time in establishing character, never slipping into stereotyping theater personalities. Sheinkin’s confident about her parody: She can pull off showbiz clichés like “the show must go on.” To underscore how good Sheinkin’s script is, this show’s second act is better than the first (That’s not a backhand compliment: It’s a maxim in musical theater that a first act is almost always stronger than the second.).

Finn’s score — his best yet — distinctively evokes songs of the 1920s and 1930s of the great America songmasters both musically and lyrically. Melodically, it’s homage to the likes of Gershwin, Porter and Rodgers but still imbued with Finn’s quirky shifts that make his music so uniquely appealing. Lyrically recalling wordsmiths like Hart and Porter, Finn puts wit back into song. Best of all, the songs emerge from character to advance the story. There’s no “stop, then go” from book to song here. Orchestrations by Bruce Coughlin assist the transitions handily.

Among the show’s 17 numbers, the highlights are Harriet Harris’ impeccably timed, hilarious “Stupid Things I Won’t Do” in the first act. So what if Harris stops the show early on? She’s so good she never lets go. Podschun and Shively as young lovers Gwen and Perry have a charming, beautifully choreographed duet in “Baby Let’s Stroll.” Laura Michelle Kelly as Julie vocally powers the rousing last numbers of both acts: “Absolutely Not” and “Civilization Won’t Die.”

As son Tony, Will Swenson — still in manic mode from “Pirates” and as stage manager and devil in New Group’s “Jerry Springer” — hams it up in “Too Much Drama in My Life”: That’s what actor Tony is all about. Burton and Fitzgerald as the lesser in-laws Bert and Kitty romp in “Avaunt, Avaunt,” a number from their dreadful musical “The Striking Viking,” a spoof in itself on a play that went wrong.

Choreographer Bergasse fittingly uses an old-fashioned dance vocabulary here, best evidenced in the graceful duet for “Baby Let’s Stroll.” He lets out all the stops with the full-cast numbers, a whopping 13-member ensemble, in the “Royal Family of Broadway “in the first act and the crowd-pleasing finale. Rando’s direction, sprightly as always, preserves the madcap of Kaufman’s comedy. Watching “Royals” is almost like seeing a musical version of “You Can’t Take It With You.” The lavish, cleverly adaptable set by Alexander Dodge, who designed “A Gentleman’s Guide to Love and Murder” on Broadway, creates a grand turn-of-the-century Upper West Side apartment. Alejo Vita’s costumes are appropriately theatrical for the theater people the Cavendishes are, especially the knockout Art Deco wardrobes for the Cavendish women.

Remarkably fully developed, “The Royals” will likely be tuned up for a longer life. Swenson’s physically demanding part and the “drama” numbers call for contouring, and the book’s first act could be snipped here and there. Still, as is, “The Royal Family of Broadway” works like a charm.

The most winsome of Finn’s melodies comes in an 11 o’clock number with Chip Zien’s mirthful rendition of the lovely “Gloriously Imperfect”: Oscar lets out how he’s stayed loyal to the Royals through thick and thin, and kept on in show business that’s no business. Oscar’s bittersweet song is a plaintive tribute to everybody that’s gotta sing, gotta dance, gotta be in theater no matter what, which “The Royal Family of Broadway” celebrates marvelously beginning to end.