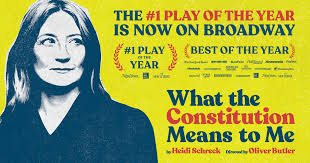 When was the last time you heard the word “constitutional” and did not add “crisis” or “impasse,” or maybe a noun of your own, like “farce” or “shit show”? Or the last time you heard two people arguing passionately from opposing sides of a constitutional issue and felt, not like sticking a fork in your eye or your hand on a hot stove, but like crying out at the top of your lungs, “I feel hope for the world! Hallelujah!”

If you are me, and (and you avoided the news on Thursday and Friday) then the answer is Wednesday night, as I was fortunate enough to see playwright/ actress Heidi Schreck’s show “What The Constitution Means To Me.” (The show, at the Helen Hayes Theatre, keeps getting extended, but as of today, will run through August 24th. Tickets start at $49, a true bargain in NYC.)

Joyous applause was one of several wide-ranging reactions to Schreck’s not-quite one-woman show. (Two other characters make appearances.) We — at least the women— also cried, and emitted deep, despairing sighs and gasps of shock. WTCMTM is part history lesson — served with a spoonful of comedic honey — part memoir, part story slam, and part call to action. (To let our national misery entirely go for three hours, catch “Frozen: The Musical,” playing next door, or “Pretty Woman,” across the street.)

The Helen Hayes Theatre is circular and intimate. It felt like it could be the rotunda of a government building, the sort of government that is warm-blooded, inclusive, and generous. My kind of government. The stage is set up as the wood-paneled interior of an American Legion hall, circa 1986, with dozens of photos of white male faces covering the walls. Schreck, standing with those men at her back, serves as a sort of guide between the old and new worlds, translating the text of our dead founding document into its current ramifications.

WTCMTM started out life in the summer of 2017 at a small festival in New York, moved to the Berkeley Repertory Theatre in San Francisco last summer, and then off-Broadway last fall, before finding its current, big stage home, where it’s playing to sold out crowds. Though the show seems far too prescient without it, the Trump administration was not her inspiration. She told “Fresh Air” that she started researching ideas in 2007, and first performed it in a prior form while Obama was still in office. It’s only in the past two years that the word “constitution” has entered into our everyday lexicon like a dark, slowly approaching storm cloud. She had the right idea at the right time.

As a teenager in Wenatchee, Washington, Schreck earned all of her future college tuition funds by winning constitution speech competitions. (As she’s quick to point out to her impressed audience, that was 30 years ago, and it was a state school.) On and off for about the first half of the show, Shreck steps behind a podium to portray her former self, answering rapid-fire questions from a white man sitting to her left and wearing a veteran’s cap. As she tried to complete her answers within his strictly enforced time limits, she shoots concerned glances in his direction. It seems she’s more afraid of saying something untoward than of running down the clock. She moves back and forth between that old self and current self, before finally discarding that young persona entirely.

This play made me wish our education system still fostered the art of rigorous, respectful debate. (Where it still exists, it seems to be another victim of our test and grade-crazy culture, at least according to this assessment by a former debater: “High school debate today is basically an intellectual game, not an exercise in truth-seeking. It has been turned into something that can easily be scored.”

But in 1986 the 15-year-old Schreck had to know the Constitution backwards and forwards, to be ready to recite any of its 26 amendments, and to expound on the interpretations of their clauses. She loved the Constitution, and thought it was perfect. She felt that way, she claimed in an interview with Terry Gross on “Fresh Air,” without any external pressure from the veterans who sponsored her. Not did it occur to her back then that the specific interests of her gender—along with those of immigrants, black and brown people, among others—were almost entirely unrepresented in the pages of our founding document.

She also had no idea then that when she publicly espoused her own support for legalized abortion in the form of the Roe vs. Wade decision, with this qualification, “although I would never make that choice for myself,” she would be faced with exactly that choice a few years later. She was at that time living in eastern Washington, an “abortion-free zone,” with no clinic for hundreds of miles.

Today, of course, her relationship to the Constitution is far more nuanced, critical and skeptical. Her family’s own experiences, specifically, the domestic and sexual violence suffered by two, likely three generations of her female ancestors, are central. Her great-great-grandmother Theressa was a mail order bride sent to marry a man in Washington state in the late 1800’s. She died of melancholia at age 36 in a mental institution. A great-grandmother was beaten by her husband, and her Grandma Betty was brutally abused by her second husband, who also raped two of her daughters. He eventually served jail time, based on the brave testimony of Schreck’s then-14-year-old mother and aunt. (The grandmother told the court the girls were lying, which revelation was a point in the show for crying, as was Schreck’s self-evident commentary: women have, historically, absorbed the fact of our powerlessness and translated it into worthlessness.)

At a few points we hear audio from government hearings and Supreme Court proceedings, the most infuriating an exchange between Antonin Scalia and Steven Breyer arguing, not over the merits of the Violence Against Women Act, or what impact their decision might have on real live people, but over the definition of the word “shall” as written in the Constitution. (The recording that elicited enthusiastic clapping from me, my two female neighbors to my left, but not the man sitting to my right, was Ruth Bader Ginsberg’s response to the question, “When will there be enough women on the Court?” She said, “When there are nine.”)

Schreck smashes a few theatrical sacred cows. She more of less convincingly makes us think the whole thing is fresh and improvised, that there’s no script involved. She engages the audience throughout. At one point she asks white, male property-holders to raise their hands. About a quarter of those seated in the orchestra sections did, including my right-hand neighbor. (I wanted to ask him, when the curtain came up, how he felt to have spent 100 minutes in the hot seat. If I had to guess, I would say he didn’t know what to think or how to feel.)

So wherefore my joyous hallelujah? Thursday Williams, the brilliant African American high school senior who enters stage left to debate Schreck toward the end of the show. She sowed hope in a hopeless place. I hooted and booed for both her and Schreck’s debate positions. It was a thrill worth the price of admission to listen to two smart women make smart points, without rancor or ill will or personal insults. As an English teacher, my loudest cheer was when Williams interrupted Schreck to correct her grammar. “It’s ‘fewer’ rules, not ‘less’ rules.” An audience member suggested Williams run for president, but she apologetically said she’s not eligible. (Though she didn’t explain, I assumed this was due to the Natural-Born-Citizen Clause of the Constitution. Perhaps it’s time for a new constitution? Not my idea, but an interesting one for a debate, don’t you think?)

But now I’ve had a couple days of reflection, I think the hopefulness of WTCMTM depends not on its characters or script or action, per se, but on the wonderfully, uniquely American fact of its existence. The great-great granddaughter of a mail order bride who’d made none of her own choices, could not own property, vote or even reasonably expect to find refuge from violence, commands a stage in the greatest city in the world, and is changing the terms of a debate.