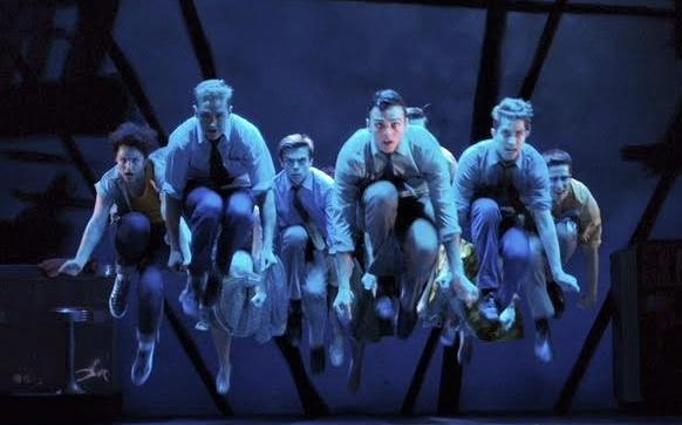 Tim Fort
The Jets, led by Jordsan J. Ford as Riff, second from right, stay 'Cool' in the Weston Playhouse production of 'West Side Story.'

THEATRE REVIEW: ‘West Side Story’ at Weston Playhouse is excellent on every level 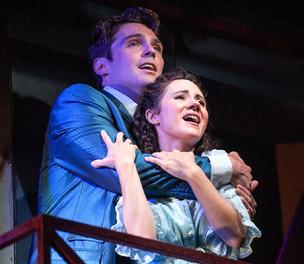 In the musical theater, when something is “excellent,” it’s often “West Side Story.” On the mainstage at the Weston Playhouse in Weston, Vermont, “West Side Story” is indeed excellent on every level. It is the 1957 retelling of Shakespeare’s “Romeo and Juliet” with the two families altered into two New York City street gangs, Juliet’s family being Puerto Rican immigrants and Romeo’s the so-called “white” native-born Polish-Americans. These are rough, raw stereotypes and were so even when the show was written. Back then, however, the Romeo came from a California family (Larry Kert, born as Frederick Lawrence, the youngest sibling of the pop music star Anita Ellis) and the Juliet was Illinois-born Carol Lawrence (born Carol Maria Laraia, a dancer in “New Faces of 1952)”. This time around, Evy Ortiz—a career Maria, having played the role all over the world—is the 1950s Juliet, and film and TV star Max Sheldon plays Tony, or Anton, her Romeo.

Sheldon and Ortiz make a lovely couple. They sing well together, they make love beautifully, they create great sympathy for their cursed love affair. We go into the theater knowing that this couple is doomed for tragedy and, in the tightly conceived evening, we watch that destiny unfold perfectly. Both of them bring honesty to their roles and, even when their performances don’t quite match my memory of Kert and Lawrence, they are very effective and quite lovely to watch and listen to as they bring Tony and Maria to vivid life.

They are joined by another couple pre-destined for disaster: Maria’s brother, Bernardo, and his girlfriend, Anita. Bernardo is the dynamically sexy DJ Petrosino and his Anita is played by Courtney Arango. Anita has been traditionally played by a Hispanic actress (Chita Rivera, Rita Moreno) and this Miami-born diva joins their ranks with this performance. Petrosino is also repeating his role, he for the sixth time, and his work brings with it a ring of authenticity. 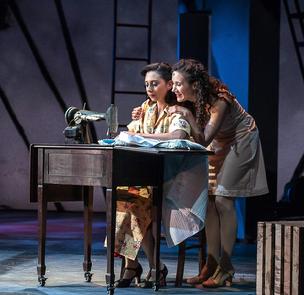 Courtney Arango as Anita and Evy Ortiz as Maria in the Weston Playhouse production of ‘West Side Story.’ Photo: Hubert Schriebl

Small but key roles outside the gangs are delivered very credibly by Allen Kendall as Police Detective Shrank, Tom Field as Officer Krupke and David Brummel as Doc.

The girls who feature in the gangs members’ lives are well-played character types, particularly by Melanie Comeau as Graziella, Bella Muller as Velma, Megumi Nakamura as Rosalia, Stefanie Renee Salyers as Francisca, Carolina Villaros as Estella and Marissa Hecker as Consuelo.

So much of what makes any “West Side Story” a success are the directorial and design elements. This production reproduces Jerome Robbins’ choreography wonderfully overseen and supervised by Felicity Stiverson. Conceived around 1949 by Robbins (then called “East Side Story”), the show has always relied on its dancing to tell the principal aspects of the story, including the fantasy ballet “Somewhere” in the second act. This has been beautifully realized here. Russell Parkman’s set is fluid and reasonable, even emulating the hand-converted locales from the original scheme. Ilona Somogyi’s costumes feel just about right for the period and the people. The lighting by Travis McHale is atmospheric and moody and sets up scenes perfectly. A complicated show for sound, Rider Q. Stanton has done a masterful job (a few glitches on opening night have surely been ironed out by now). 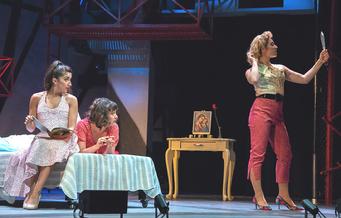 Tim Fort’s precise reproduction of stage pictures that have achieved iconic status are wonderful. Some of the characters could use a few more days of development, however, but, even with that caveat, the performances were charming and lovely. Maria’s calling-out sequence near the end of the play was a low point in an otherwise ideal performance, and even this “low” was higher than many have achieved (I can never forget Lawrence’s work in this scene, I’m afraid, and it remains a standard for me).

I often think I’ve seen this show one time too many, but this one was a joy to watch and a perfect show to recommend in this centennial anniversary year of Leonard Bernstein’s birth. His score is still the perfect crossover from classical ballet to Broadway standard. Sondheim’s lyrics are not his finest, but they do what they need to do and they show him at the start of a brilliant career.

I hope people get to see this production. It is worth the drive to Weston, Vermont. 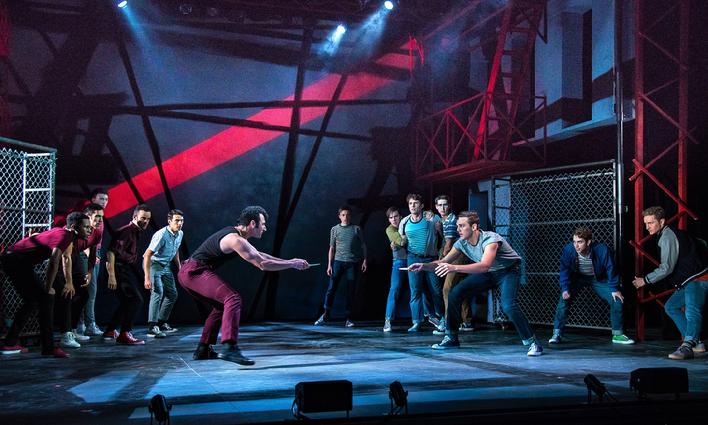 DJ Petrosino as Bernardo faces Jordan J. Ford as Riff in ‘The Rumble’ in the Weston Playhouse production of ‘West Side Story.’ photo: Hubert Schriebl

West Side Story plays at the Weston Playhouse, 703 Main St., Weston, Vermont, through Saturday, Aug. 4. For information and tickets, see the Berkshire Edge calendar, go to westonplayhouse.org or call the box office at (802) 824-5288.