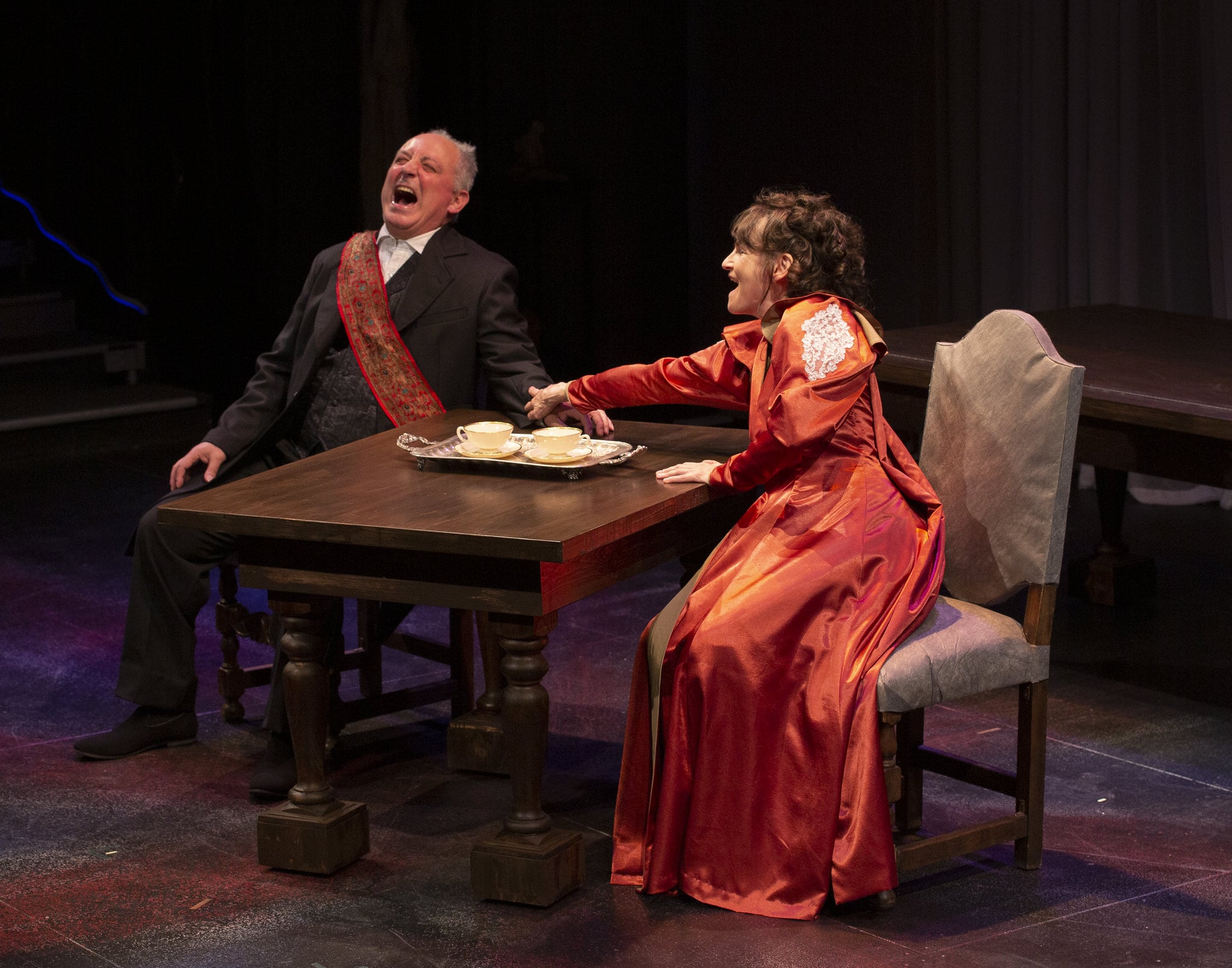 “… the need for the beautiful things.”

Young Jennie Jerome has been trained by her father, Leonard Jerome, to learn the world, to learn its secrets both classical and contemporary. He wants her to be the equivalent of the son he never fathered (he has three daughters) and she is bright, so very bright, and strong, so very strong. His daughter is the star of his world and he would have her be the world’s brightest star. Her mother—the only major character in Jennie’s personal story who never appears in the new play “Lady Randy” by Richmond resident Anne Undeland, now receiving its world premiere production by WAM Theatre—wants something else. She wants a brilliant marriage for Jennie, and she takes her daughters to England to marriage market them in the world of British aristocracy. She has American millions to bargain with for her girls. Jennie, with all she has to offer, attracts the attention of Lord Randolph Churchill, whom she marries, giving him a seemingly endless supply of capital and two sons, one of whom was Winston Churchill. End of story.

Or is it? For 89 minutes Jennie’s world and life is explored in this new play. [footnote: I have watched the development of this play over the past three years from concept to production. Its development has been a wonderful process.] Lord Randolph came not just with history and heritage, he came with problems that would plague and destroy a weaker woman, but Jenny, now Lady Randy, has that history, that education from a father who was an outsider but a clever one. She has the will to survive every obstacle thrown in her path and she uses all of her opportunities, regardless of her own reputation, in order to survive. This play shows us a woman out of her time. Jennie is a combination of a Kardashian or a Lady Gaga with Salome, or Cleopatra. Author Undeland has drawn the picture of a significant force of nature and then neatly colored in the lines to bring forward all of the degrees of nature that reinforce young Jennie, who never ages, never loses ground, never suffers from her personal strife, but survives to bring forward her son, a stutterer, and usher him onto the road to greatness. Quite a life.

Undeland, the actress, plays Jennie. She has written this play for herself, and she was right to do so, for she is superb, magnificent, a 19th-century “dollar princess” with a modern edge. Like the original, who never sacrificed her American background to satisfy the snobbish elite of old England, Undeland is as American as apple pie with cheese on it. Her voice, mannerisms, attitude are exactly what the role calls for.

Jennie Jerome was perfect for the role of wife of a peer. She was attractive, but not a beauty, overtly sexual but never a tart. She could hold a conversation, coerce with her wiles any aristocrat she fancied for whatever purpose—including Albert, Prince of Wales. Undeland conveys this quality in her Jennie without being obvious about it, her natural charm conveyed into the character of Jennie. Her voice is one of her finest tools. She gives us the harsh Jennie, the loving Jennie, the confused Jennie and the commanding force that is Jennie. She does it with subtle vocal alterations even when her facial expressions do not match the voice, a dichotomy that speaks volumes she hasn’t written down. Her character is amazingly full-throated and fully fleshed out in every way. She is so convincing, it is tempting to consider seeing the play twice just to see if the actress can do this over again.

It is doubly amazing to watch Mark Zeisler portray a dozen or so characters, switching from one to another without missing a beat. He plays Jennie’s father, husband and son, two of her lovers and her mother-in-law, each of them entirely realized and never the same. His technique is remarkable as he uses a gesture and a quietly altered voice, once even playing two characters having a conversation, differentiated by a head direction only. He even plays Winston’s nanny, concerned for his welfare; and then Winston, faltering, fat and stuttering, devoted to his mother, who never dotes on him. She confesses in one sequence that she has never even read one of his letters to her from his school. Jennie’s indifference to him cannot squelch him, and Zeisler brings dignity to the condition of a neglected child. I hope the order of his character portrayals is written down somewhere on the set or on his costume, for his lightning shifts are remarkable and he never misses a single transition.

Together on stage Zeisler and Undeland wend their way through a lot of years, each giving the other the reactions their roles insist upon for the reality to supercede the playwrighting. The questions “Is all of this real? Did it actually happen this way?” are unavoidable and the answers lie somewhere in between the scenes. Apparently most of it did, and pretty much as witnessed here, but if something isn’t right, it really doesn’t matter because the two actors present a most convincing picture of relationships that go awry and realities that make great fiction.

Jim Frangione has directed this play to utter and complete perfection. When Undeland reacts without words, the input from the director must be a part of her process, for there is a naturalness that no one could produce alone without a director to suggest a movement, a gesture, an attitude. He creates a wonderful stage picture: the duchess and her daughter-in-law sitting together having an intimate conversation but physically miles apart. It is how they see and hear one another that a fine director makes happen, and Frangione has used the miles between them both physically and emotionally.

His stage pictures are remarkable. The stage at the Elayne P. Bernstein Theatre is wide and shallow, but he and his designers have brought depth and distance into play. He gives Jennie’s lover Count Kinsky special physical rapport with her, but when he gives them distance, their intimate relationship becomes so much more special. Her friendship with the prince is so very different. He has Jennie touch him more often, but that intimacy is determinedly distant. The changes wrought by illness on Lord Randolph are played with an awkwardness that is especially poignant after the lovely courtship scene at the top of the play. So much of this is the actor, but so much is the eye and will of the director at work. Luckily for this tight and boisterous script, the three principals have worked very well together.

Juliana von Haubrich’s set is both functional and engaging, providing the needed options to move the play from scene to scene. Brittany Belz’s costumes work efficiently and give us the characters though not the passing of years. The lighting designed by Lara Dubin had that perfect combination of time and place and yet remained deliciously theatrical with transitions that kept the audience involved but never overeager. Tom Shread’s sound design was superb—he never overwhelmed the actors, and kept us aware of place and activity and action when there was none. His levels, mostly near-subliminal, were absolutely right and I hope nobody ever convinces him otherwise. Lianne Arnold used projections to focus events and places and they worked perfectly every time. Fran Rubenstein, the stage manager, called a perfect show, nothing out of place.

I wanted, for Anne Undeland, a perfect realization of her first full-length play and WAM gave me what I prayed for. I see a great many world premieres and so many are very satisfying even when I’m not fond of the play itself. In this case, knowing its possibilities from three years of exposure to the work in development, I got what I prayed for. So often a production’s limited run breaks my heart and this may well be one of those. I cannot recommend this play enough to make the point that when all the elements are as right as they are here, there should be no limitations; opportunities for mature realizations will slip away before the actors can find them; audiences will be lost before the appeal to see the work runs out. This is one of those theatrical events that demands attention; high-end talents are displaying their best work. To quote Linda in Arthur Miller’s “Death of a Salesman” as my final word on “Lady Randy”: “Attention must be paid.”