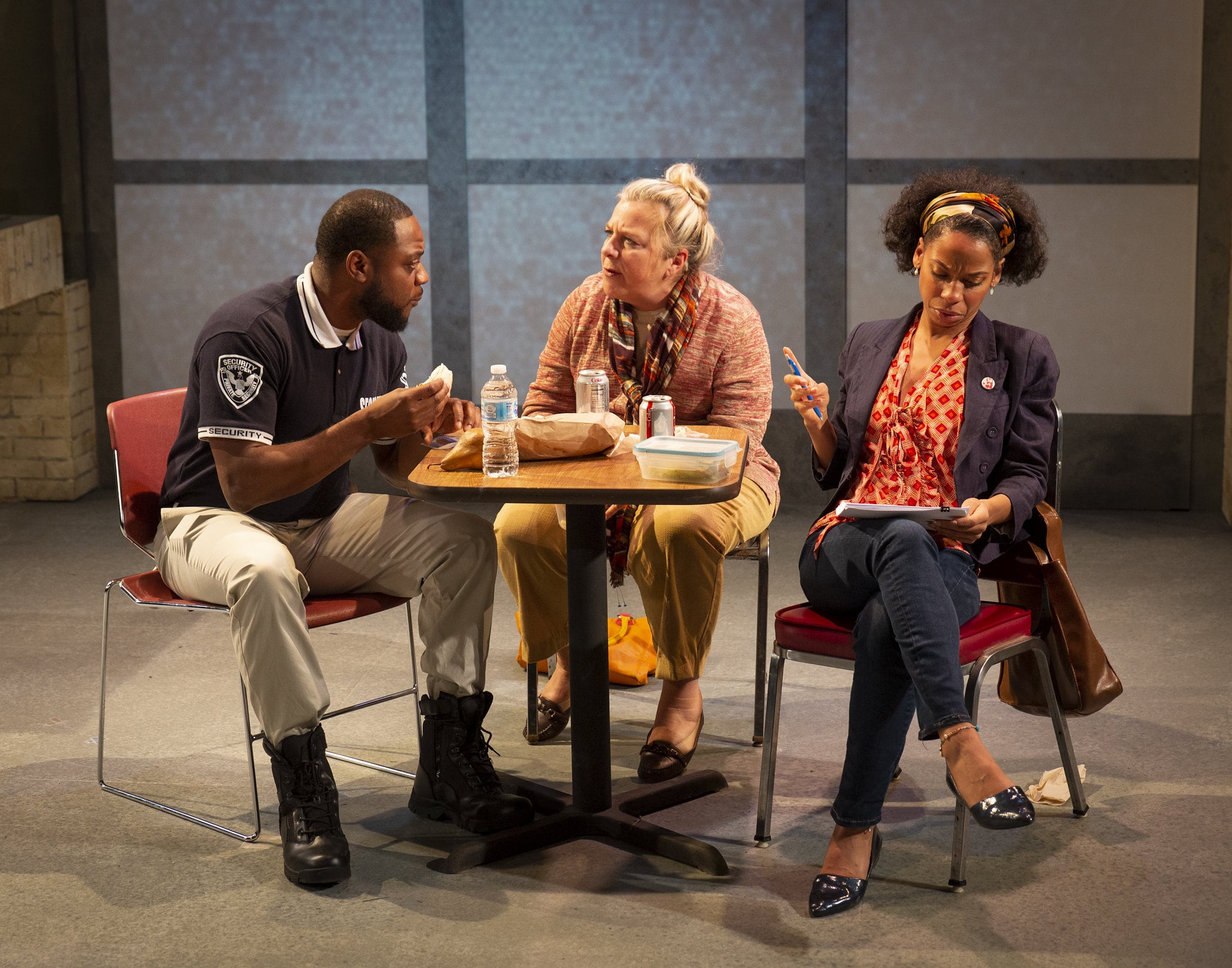 Treating other people — hell, treating yourself — with honesty and fairness is what Dominique Morisseau’s play “Pipeline” seems to be about. There are confrontations of bitterness, confrontations of humane treatment, confrontations of obligation, and love throughout the 90-minute one-act play now on stage at Shakespeare & Company and produced by WAM Theatre. It is a strong play — a moving, if sometimes confusing play — but that is what a play of confrontation is, what it does: It makes you think. Most of us find thinking hard to do at what should be an entertainment, but good entertainment should leave you thinking, thinking about its content, its message, what it wants us to understand. “Pipeline” does just that. It leaves you thinking, wondering, questioning values and the honesty that comes with a realization. We all deal with things that hurt, things that ask for excuses — we expect them, actually. But are they necessary or a cop-out? Morisseau leaves us with that question.

“The play’s the thing,” as they say on this lot, “in which to catch the conscience of the King.” Nya Joseph is an English teacher in a smart, integrated high school in an inner city environment; her son Omari is a student there. They are Black and feel the combined joy and burden of that fact. Omari is emotionally flexing his reactions to things, causing trouble and facing expulsion for his attack on a teacher. Nya is dealing with her ex-husband’s new girlfriend, her son’s disillusionment, her work friend’s growing interest in her, and her solitariness and the stress it brings her. She is smoking and drinking a bit too much. It all is taking a toll on her well-being. Morisseau’s beautiful use of language defines Nya and the others to perfection, and WAM’s production puts her and all that happens into a near-fantasy world of moveable walls, projected people and words, confusing lighting, and the strike of a stroke.

The Playwright’s Rules of Engagement, written to combat her sense of white supremacy in audiences, encourages us all to be a part of the action, to integrate this world she presents to us. It is generally good advice, some of those words the same ones I’ve used for audiences in our region in years past, and this play seems to encourage that through its grand and gracious writing.

As Nya’s possible suitor, definite friend and school security man named Dun, James Ricardo Milord plays every element of his role with total honesty and sincerity. In one scene, faced with the overwhelming anger of another teacher, he uses a calm attitude to combat a nearly inflammatory situation. It is typical of his performance from his first scene to his last one — to be discussed later — and he presents a human being anyone would gladly befriend. It’s a swell performance and a consistent, truthful one from beginning to end. Milord only changes his niceness once in this play, and that is a fleeting moment toward the end when he meets Nya’s ex-husband; it almost sets up a possible sequel story.

Among his lunchbreak companions is Laurie, a teacher whose length of service in the public school system has brought her a deep understanding of how good the education is and how remote it can be for her students. Barbara Douglass plays Laurie with humor and with anger, and she makes this combination absolutely unforgettable. I could easily draw parallels between the woman she offers us and the women I studied under in that environment. She is as real as a Christmas ornament, fragile but strong and capable of surviving years of being looked at but not appreciated.

Omari’s girlfriend of the moment is Jasmine, played here by Sandra Seoane-Seri. Jasmine is an available girl, one who gets by using her wit and her attractiveness with equal parts of panache. The actress sashays and shows her cleavage, but she also delivers the lines Morisseau has given her with a straightforward attitude that deserves the laughter she receives and the applause she generates. Jasmine is a much nicer girl, a concerned friend to Omari, who doesn’t treat her well but who obviously respects her beyond the expectations of the teenage years. Seoane-Seri delivers her to the audience as a packaged, marketable youngster whose future should bring her something better.

As estranged father Xavier, actor Kevin Craig West delivers a fine, measured performance of a man emotionally restricted through the confusion of the uninvolved divorced father. He is direct and difficult in his scene with his ex-wife, withheld and angry with his son, and oddly jealous when he meets Dun. The actor has to play out his indifference with a fatherly sense that Xavier cannot muster and so his selfishness shines through. This is very well done by West in a marvelous, restrained way that lets you feel his anger at so many aspects of his experiences in this play.

What really drives this play, though, is the mother-son relationship delivered to perfection by Hubens “Bobby” Cius as Omari and Alexandria Danielle King as his mother, Nya. These two actors have forged a connection somehow and onstage together they play the reality of this relationship without any sign of acting. They exhibit love and frustration, anger and resentment the way any son and mother do in real life. Their touches, embraces, distances all came off as so real there was a sensation of watching neighbors, people you really know, and not actors. From Row E at the back wall of this intimate theater, they pulled me across the space and into their situation. King’s honesty in their scenes together was incredible. She is a dynamo whose energy-rushed emotions were unavoidable. Similarly, his thoughts played across his face constantly and gave access to his thought processes. While I doubt there is a real blood connection here, they felt like a family, and for this play there couldn’t have been a finer acting technique.

Near the end of the play, the three men are placed across from one another. Tensions mount instantly. The play takes on a male mystique not frequently felt in WAM’s presentations. When Dun leaves them together as he must, father and son confront the reality that drives each of them to do what they do and to bear witness to their lives’ mistakes. The writing here is what gives Morisseau an edge in the modern theater. The two actors, West and Cius, deliver exactly what the play needs, and director Dawn M. Simmons delivers the play to us with its underlying message on display in a brief but effective way that, unknown before, is what we’ve needed.

Simmons has done some beautiful work with this script. Having a superb cast hasn’t hurt and the talent level throughout helps deliver an almost perfect work. Shelley Barish’s set design is functional and fascinating. John Adekoje’s projections fill in gaps and reinforce the imagery in the play’s words. Elizabeth Rocha’s costumes define the characters and Michaela Carmela Bocchino’s lighting keeps the play dark, the players in half-light at times. A few scenes with dim or offset lighting and hard-to-grasp direction left me a bit confused, but overall, their work, along with sound designer Greg Smith’s fascinating choices, kept the play as interesting to watch as it was to hear.

I want to know what happens to all of these people and to their lives. I want to see these actors again somehow. I want to see this play again, to experience it and learn from it. It’s a very fine way to spend 90 minutes and I recommend it to you highly.