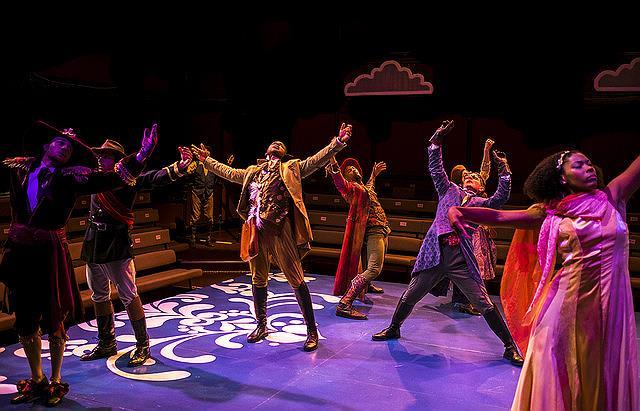 Ava G. Lindenmaier
The traditional Dibble Dance with the company, in Shakespeare & Company's production of 'Two Gentlemen of Verona.' 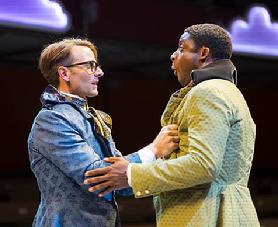 William Shakespeare’s second comedy (after four history plays, one tragedy and the classic “A Comedy of Errors”) was “The Two Gentlemen of Verona.” Its position in the canon of his works is and has always been disputed, some thinking that its clear lack of maturity in the writing could make it his first produced play. It is undoubtedly based on a Spanish novel by Portuguese author Jorge de Montemayor. It is certainly a key piece in the later plays of the Bard of Avon, with many of its elements re-used to better effect.

The undisputable fact about this play is that it is funny. Put a funny Shakespeare play into the talented hands of director Jonathan Croy and you are likely to get an even funnier show out of it. That is certainly the case in the current production at Shakespeare and Company in Lenox. Croy has used his perfect funny bone to create more variables than Shakespeare ever put into this play. He has even given the one truly classic composition, the song “Who is Sylvia? Who is She?”, into a mock-modern pop/rock/rap mode that astounds the audience, especially when Thomas Brazzle as Proteus whips out a hand mike to sing the song accompanied by almost the entire company. 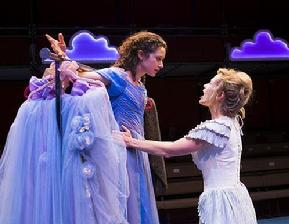 Brazzle plays one half of a pair of besties, Proteus, who loves his friend, Valentine, with a pure boyish passion like no other. When they are together they are always in one another’s embrace. They are physical as well as emotional buddies and they support one another’s falling in love with the women they meet, especially Proteus with his lady-love, Julia. Valentine, played here by Ryan Winkles, is sent off to Milan to broaden himself and there he falls in love with the elusive Sylvia. Things grow complicated when Proteus joins Valentine in Milan and he also falls in love with Sylvia, ignoring his pledge of devotion to Julia. Things begin to get messy and that is where the plot takes a firm hold.

Winkles plays the romantic lead in the play with a winsomeness that is endearing. He has grace, exhibits charms, flaunts his heartthrobs and makes himself indispensible to the romance of the play. In an earlier time, he would have been the exaggerated comic fop of the play, but his work has grown to where he can now underplay moments and make them fully effective. His quiet moments are more effective than his earlier exhibitions of flamboyance once were. In fact, he is the ideal lead in a Shakespeare comedy, as he deftly proves in this play.

Brazzle’s strengths lie in his romantic bearing and his booming voice. He nearly sings every line he speaks and he exudes both genuine desire for his two ladies and complete remorse at the close of the play. In Croy’s edition, however, he suffers more than Proteus has in the past, which is a most interesting interpretation of the play.

Kate Abbruzzese is Julia, the first of Shakespeare’s heroines to disguise herself as a boy in order to follow her lover into temporary exile from her Veronese home. Abbruzzese has a remarkable facility for reaction. As things play out around her, there is a constant visual backup to the intentions of the playwright: We can see how she feels about what she witnesses and hears. Her way of playing is both outgoing and inner space-revealing and the combination gives her Julia a very special reality, especially when she is disguised as a boy. 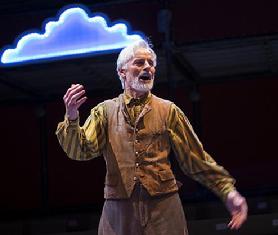 Tamara Hickey plays her taunting maid Lucetta with humor and with great appeal. She is almost too sexy to be the maid, but she is equally funny, so it works out well. There are other servants in this play, as well: It is rather the “Upstairs Downstairs” of the early Shakespeare. Jason Asprey is delightful as Speed, the manservant to Valentine. Never on time and always interested in being tipped for his services, Asprey makes him a neo-cockney and it works for the character. Peter Andersen plays the manservant of Antonio and he gets his moments to shine, mostly in the early scenes of the play.

The servant who gets the best scenes and biggest laughs, however, is Launce — often considered one of Shakespeare’s greatest creations — played by John Hadden, back in the company after a 19-year hiatus working elsewhere. This is his second role for the season and his interpretation of the role sets a new classic standard for the man. Accompanied most of the time by his faithful cur, Crab, who lies down on any coat laid out for him by Launce, Hadden’s role is one devoted to the spoken word in definitive contrast with the written word. Double entendre, faux interpretation, and minor puns abound in Launce and Hadden doesn’t let a single one get by him. He and Asprey play several scenes together and they are all show-stopping winners.

Others in the company of 14 players who should be singled out for their achievements include Erick Avari as the Duke, Sylvia’s father; Bella Merlin as one of the outlaws, Michael Fuchs as Antonio, father of Proteus; Dylan Wittrock as Sir Thurio, Sylvia’s unwanted suitor; and Ella as Crab the dog. They are all outstanding.

Croy’s directing of the ensemble is both flawless and relentless. He gives the actors the impetus to get their roles right and then sends them off in a downhill race to the finish line with every moment faster than the one before it. It is an incredible pace, considering that the play lasts two hours and 40 minutes with an intermission. These actors can handle the pace, though; they look as though they are enjoying each quirky minute of it. 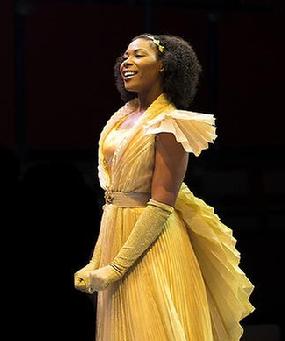 There are two real stars in this show: the costume designer, Stella Schwartz, who knows how to dress people funny without going in an exaggerated mode, and actress Cloteal L. Horne who plays Sylvia. In silks, satins and Fortuni silk, Horne gives an elegance to the clothing, the theater, and the show. She imbues the place with class and her idea of who Sylvia actually is makes Shakespeare’s lines ever so much more important. “Holy, fair, and wise is she; The heaven such grace did lend her, That she might admired be,” ends the first verse and we see all of that in her bearing, hear it in her speech, and feel it in each passing across the stage she makes. When her love for Valentine becomes ardent, she is apt be an aggressor, but equally content to be the pursued one. Horne gives this character a reality that prevents her from becoming a cliché. In a classic comedy that is no easy task, for everyone who ever saw or read this play knows how Sylvia must behave, must appear. Croy lets no template for Sylvia get in his way of directing her and the two people in charge of Sylvia have brought a very contemporary, very graspable woman on the oblong stage in Lenox.

Kris Stone’s set is imaginative, with high-placed clouds bumping in colors and trace-lights when needed. Matthew Miller’s lighting design is just great. Luke Reed has composed some wonderful and atmospheric music for the play and Susan Dibble shares credit with the cast for the dancing.

On the large main stage at Shakespeare and Company, this play works itself down to its principal bone structure and then fleshes out the remains with a new sheen (if you know your Shakespeare and see this play, you will instantly know what I mean). For a long play, it’s a reasonable comedy and, for a comedy, it is one step this side of a laugh riot. Leave your Shakespeare loyalty at home (I actually heard someone say that the playwright must be rolling over in his grave while the woman next to me declared it to be the best version of the play she’d ever seen – how’s that for audience reactions?). The ultimate passer-by comment came on exiting the theater when a man in front of me commented on the portrait of John Douglas Thompson, calling him a “Nubian,” which couldn’t have been more inappropriate.

Depending on where you sit for this play, you may be drawn into the show. My right shoe ended up playing Launce’s mother. Others held packages for the cast or were pulled into a dance sequence. This isn’t really an audience participation play, but this cast wants to be sure you’re engaged and involved. You can expect them to do just about anything, and what that really does is add to the fun and the enjoyment of the play. One guarantee here: with this Croy production and these people on stage, you will never ever be bored. I just defy you to identify any actual gentlemen in this play. I dare you. I do.

The Two Gentlemen of Verona plays at the Tina Packer Playhouse at Shakespeare and Company, 70 Kemble Street, Lenox, MA through Sunday, Sept. 4. For information and tickets, see the Berkshire Edge calendar, call the box office at (413) 637-3353, or go online to shakespeare.org.