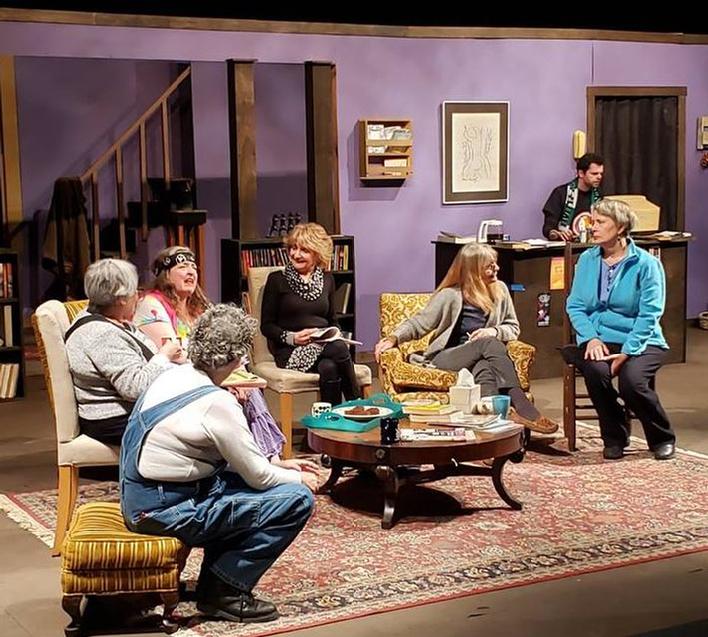 New and Used
By Gay Monteverde
Directed by John Monteverde

“… to take on the establishment.”

Six sprightly women all over the age of 55 come together monthly in a small, independent bookstore in Portland, Oregon, to discuss a book in this new, modern version of Jane Austen’s “Pride and Prejudice,” now receiving its world premiere performances on the Robert Boland stage at Berkshire Community College in Pittsfield. Written by Gay Monteverde and directed by her son John, it puts the Austen women into a new and different context, even separating some of them from bloodline family into heartfelt friends. The company on stage is comprised of extremely talented players; the design of the show is by more-than-competent artists. The play runs nearly three hours and, as a first time outing, shows the play’s plusses and its minuses. It needs pruning and it needs better timing. This may come in time but, for now, the play is overlong with a verbal tediousness that halts its effect. However, the play is basically very good with some excellent dialogue and concepts and the players make the most of every opportunity it contains. It is an entertaining evening, but you may want to eat before you go, because this “comedy” ultimately strains your patience and your appetite.

The author is very sweet in her program notes about her son’s devotion to her work and to getting the play seen and heard. He has certainly done justice to her work, but there are times when a soul divorced from the material could do even better by advising the author on verbiage and fill. There is just too much play here. Sixteen characters fill the stage with their stories and their needs. To give equal time to all makes little sense in what should be a sprightly and deliberate look at how these characters interconnect in 2018. The Bennet girls have been reduced to only two: Elizabeth, now called simply Liz; and Lydia, the frivolous younger sister. Liz is played by the remarkably facile Shevaun Keogh Walker and Lydia is undertaken by Wanda Libardi. Their physical similarities are wonderful with Libardi the beauty and Walker the practical. Liz owns the bookstore in which the play has been set. Lydia owns the menfolk she pursues with a single-mindedness that is both amusing and disturbing. Jane, now a friend and bookstore employee (or perhaps partner), is played by Marion Cimini and it is partly her story that rules the night.

The empty lot next door has been purchased for development by wealthy widower Chuck Bingley, who becomes fascinated by widow Jane. His financial advisor Will Darcy turns out to also fancy Liz, much to the chagrin of Bingley’s difficult daughter Caitlyn. If the names are familiar, they should be: All of them come right out Austen’s novel, along with the relationships. R. W. Collins woos Liz but falls in love with her friend Charlene; and Lydia is pursuing George Wickham, who also flirts with spinster Liz. It is Austen redux.

Thom Whaley is a charmingly romantic Darcy, and Ted Kozlowski is a sturdy and handsome Bingley. Brian Litscher is an amusing if a bit slow on the uptake Collins, and Jim Reynolds is a handsome and charming Wickham. Simon Cole plays Liz’s son Ben (born out of wedlock) and Marya DeLaRouche plays his pregnant and vicious wife “Mrs. B.” All of the men are perfectly cast and deliver nicely in their roles. Steve Rogers and Alyce Kaplan play neighbors Ed and Irene Gardner. Bingley’s secretary, Mrs. Fitz, is delightful in her one scene, her British accent bringing us back to the Austen without trying. Lara Denmark gives Caitlyn a defiant posture and nasty soul.

The other women in the reading group all contribute immensely to the final effectiveness of the play. Patricia Duckworth is the lesbian friend whose opinions on mainstream literature are wonderful and pointed. Jackie DiGiorgis as Charlene, a farmer who ultimately marries Collins, is strong, willful and charming. Her contributions to the scenes are wonderful and pointed and help keep the action and plot centered and motivated. Carol Charniga is pure heaven as the last living hippy in Portland. Her character, Cat, is much cherished by the other women and by the audience, as well.

But the play’s values are in the performances of the three central women: Liz, Jane and Lydia. Walker’s Liz is deliberate and strong and her basic values focus the play’s intent, an independence that needs more than a touch of dependence on others beside her partner and her son. Walker is wonderful to watch and listen to throughout the long evening and her final, subtle breakout is much appreciated. Cimini as her friend uses subtlety to express her character’s needs. She never is fully outspoken, but her actions speak as loud as her words and her facial expressions are wonderful. We read her as we read Austen—carefully, cherishing each moment she offers. The brittle, acerbic Lydia is a perfect fit for the face, body and voice of Libardi. Like the other two principals, she is always right on the money in her playing. She is funny and disarming, hard to love but easy to like. This trio could flow right back into the 19th-century originals without changing a thing except for the sense of experience that Monteverde has written into these versions of the Bennet women.

The director needs to aid the playwright a bit more. There are wonderful things he has done with this coterie of players, but the pace of the show needs a candle lit under it. It drags in too many places and just a change of pace could improve the show’s impact. The play, as noted, needs a few nips and tucks, some cuts and some improvements, but the show’s concept is delicious and the flow of the piece is right on. The set (no designer credited) is excellent and costumes (no designer credited) are just right for the characters. Monica Bliss has lit the show well and John Fletcher’s sound design is fine. Bev Krol’s props are just right.

A world premiere is always worth seeing. Who knows where this show will go from here? We have a lucky opportunity to see something in a raw state that holds so much promise. It’s an opportunity not often seen in a venue such as this, so take from it what you can.

New and Used plays through Sunday, Feb. 17, at the Robert Boland Theatre at Berkshire Community College in Pittsfield. For information and tickets, see the Berkshire Edge calendar, go to www.townplayers.org or call the box office at (413) 443-9279.