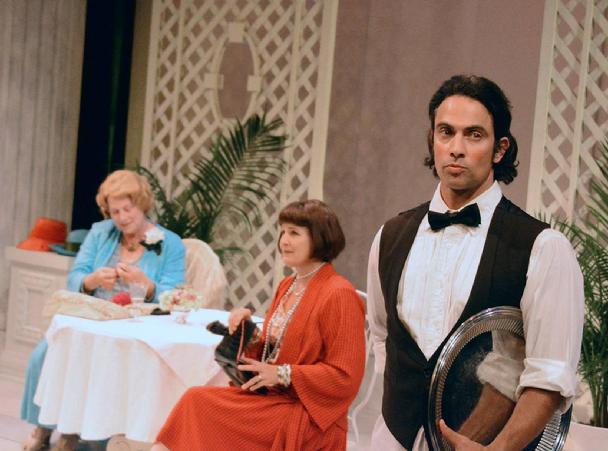 A Perfect Pair of Wharton Comedies: Roman Fever and The Fullness of Life
Adapted by Dennis Krausnick from the stories of Edith Wharton
Directed by Normi Noel

“… with no regard for consequences.”

First, there is the sensitivity of Edith Wharton. Second, there is the skill and theatricality of Dennis Krausnick. Third but foremost, there is the quality of human tears in the voice of Diane Prusha. She can smile and make you sad as she speaks of her husband, her past, her child. She can take the rifle butt of humor at her expense and make you laugh as her voice woefully expresses personal joys. If ever an actress was created to play the women of Wharton’s imagination, it is Diane Prusha. She has a unique facility for this, a quality of quality and refinement that always draws us to tears through sincerity and pathos. It is hard to imagine another woman playing the women she plays in this show.

“Comedy?” I heard someone ask during intermission at the theater and my reply, “It’s comedy if no one dies,” made sense until the lights went down and the second play, the new one, began. The woman in the center of things has just died but, yes, it is a comedy nevertheless, though a comedy that brings a lump to your throat and a tear to your eye. It is the voice again – the voice of Diane Prusha expressing her belief in the sureness of life and experience, that inevitable tear in her voice as she speaks of the wonder and the glory of it all. By the end it was clear that my original answer was correct. No one dies in this play. Life is reaffirmed, though with a tear in the voice that tears away the coziness and comfort of life as we know it and replaces it with a confidence that cannot be removed at any cost.

Prusha is a natural wonder. We do not have the privilege of seeing her often any longer, but these two roles are ones that must be seen by fans of good theater. And she is not alone in this triumph of one-act plays: there is Corinna May; there is David Joseph. This is a trio who must not be ignored or left on their own. They must have us to play to, to adore them in their Whartonous brilliance.

In the first play, “Roman Fever,” Joseph plays an Italian waiter in Rome, Italy, where two old neighbors and friends, having seen their daughters depart after lunch, sit and reminisce about their lives and their odd friendship. Prusha’s modesty as Grace Ansley is touching beside the colder, more cynical memory of Alida Slade, played to the hilt by Corinna May. Alida pushes all of Grace’s buttons. Grace endures Alida’s slings and arrows and maintains her teary-voiced poise through it all. For she has her own thoughts and memories and secrets never shared, and these give Grace her inner strength.

The waiter has his own thoughts on these actions and he holds them to himself. Later, outside the restaurant, he sings in the street and the music he renders brings out a change in the two women as they continue their edgy friendship on this Roman terrace. May brings her character into an acerbic change of attitude and Prusha allows her character to absorb more baited insults with her fine upbringing in a Victorian-era upper-class environment as the comedy heightens into brittleness. The final moments are made so very memorable by Prusha as her zinger of a closing line turns the tide of event and stems the flower of morality, so much a Wharton identifier. The trio is brilliant in this work–unstoppable, really.

But then, after intermission, they go one better.

“The Fullness of Life” brings together a woman whose life has never been perfect–but she has made it acceptable as far as she could–and her dreams. Once on the “other side” of life, she is introduced to the perfection she has always desired. What she discovers about her dream and about herself is an emotional challenge that she must face for eternity. Prusha is the woman. Her dependence upon her travel satchel is most telling and, again, her voice conveys so much more of the inner person than her physical image could ever convey.

David Joseph is the realization of all things beautiful. He plays this with a sensitivity that is almost parody and, at times, is stretched into an image that cannot be ignored. All of this takes place under the careful tutelage of the spirit played by Corinna May. Her lovely realization of this character is both charming and wary. There is a risk in this role, a risk of satire that May avoids as only a champion actress could manage. She takes on this role with conviction, and it is that quality that so completely inspires Prusha’s character. The way these two play off of one another is utterly divine, and that in a play where the divine is paramount.

May is more an angel than a spirit and more a spirit than an angel. She brings a sweetness and a conviction to the role that overcomes the arch concept of the piece. In so doing, she adds a higher level of reality to the work than it asks of her as she maintains her place on the thin wall of theatrical manipulation. This is remarkable work, an achievement, keeping this play real in the light of its concept. Joseph may be the image of perfection for Prusha, but it is May’s Spirit that directs the intentions of the Woman. I think this may be Krausnick’s finest adaptation of a Wharton tale, and he has the perfect company to bring it to life.

Normi Noel has guided the two plays into a lovely evening of theater with all of our emotions turned to the plays’ advantage. Patrick Brennan has given her two sets that give reality to the emotional journeys played out here and Kiki Smith’s costumes complement the visual images ideally. Stephen D. Ball has illuminated the two works with distinction and Amy Altadonna has provided lovely sound where sound is needed.

Good one-act plays with more than one actor are becoming rare, so these are a must-see. They are good theater and that is what we need.

The Wharton Comedies plays in the Elayne P. Bernstein Theatre at Shakespeare & Company, 70 Kemble St., Lenox, Massachusetts, through Sunday, Sept. 10. For information and tickets, see the Berkshire Edge calendar, call the box office at (413) 637-3353 or go online to shakespeare.org.