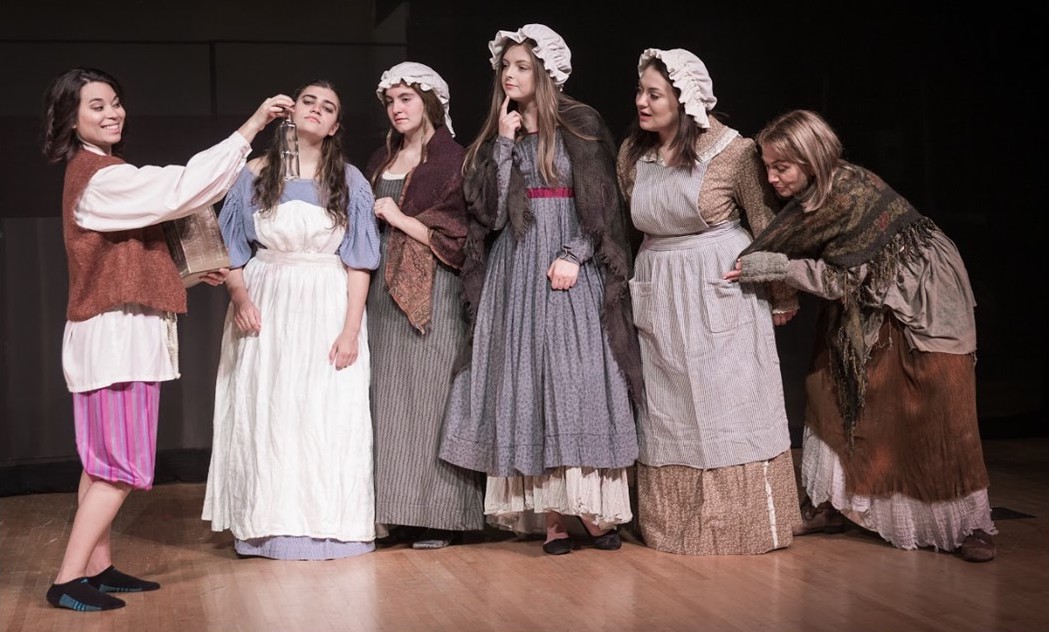 Sweeney Todd: The Demon Barber of Fleet Street
Book by Hugh Wheeler
Music and lyrics by Stephen Sondheim (adapted from the play by Christopher Bond)
Directed by Stephen Sanborn

“Nothing’s gonna harm you, not while I’m around”

There’s nothing sweeter than complete revenge ‑ except when it exceeds its goal, except when it’s set to music. This is the lesson we learn from the musical “Sweeney Todd: The Demon Barber of Fleet Street.” By the final chorus of “The Ballad of Sweeney Todd,” which follows the final scene of the play, just about everyone is dead and there is still “no place like London.” That’s why they call the genre “musical comedy”: even when it’s not a comedy, it’s fun. In the new regional production by The Two Of Us Productions, playing in Craryville, New York, the fun is in the music and the performances of the lead performers, and you can be sure that nothing will harm you, that the “Grand Guignol” is less than grand and the evening will be a sweet one after all.

There is a beggar woman who sings her peculiar chant throughout the show. She is simply a mad woman who roams the streets around Fleet Street making everyone crazy as she begs, implores, extorts and pretends to be a prostitute gone wrong. That this woman holds a key to the secret journeys of both Sweeney and Mrs. Lovett is central to the show, making her, essentially, the second most important character in the play — you just don’t know it until the final scene. She is beautifully sung and nicely played by Benita Zahn.

Sparring with her for that spot on the roster is young Toby Ragg, played here by Carmen Lookshire, who proves to be a viable alternative to the usual quirky-voiced males who have played the role. I wasn’t sure at first that a female Toby would work, but she proved me wrong. Her singing was marvelous and though she never showed me her eventual madness, she sure pulled off the final sequence nicely.

Of course, the full weight of a Sweeney Todd is invested in the Sweeney. Joshuah Patriarco has chosen the insanity forced upon a man through his need for vengeance to shape his character. There are few grades of crazy for him. He starts insane and ends insane. But his voice carries the power in Sondheim’s music and the single-mindedness of someone for whom rage is the best example of control. It is a dynamic set of choices fully realized in everything he does. It does make you wonder, though, about Mrs. Lovett and her unavoidable attraction to the man.

Played by Constance Lopez, Mrs. Lovett is clearly his equal. Having inherited her meat pie business from her diffident husband, she sees in the dynamically centered Sweeney the right man for her. His obsession matches her own and as Lopez shows us in her first song, she has rhythm difficulties that leave her obsessed as well. Lopez is truly at her best here, especially in the song “By the Sea,” which is a triumph of humor in absentia when she exposes her childhood dream to the maniac she adores. She has brilliant moments throughout the show and this is clearly a role she is making her own with no allegiance to the women who came before her, for which I am grateful; I’ve grown tired of pseudo-Angela Lansburys playing the role. There are other ways to present her, as Lopez clearly shows in this production.

The entire company does well with their roles. William Flaim is a beautiful singer, just perfect for Anthony Hope, the juvenile hero of the play. Isabel Costa handles his lady love, Johanna, very well. As her guardian, Judge Turpin, Frank Leavitt sings a marvelously evil man beautifully, even if his sadomasochism is downplayed here. His buddy in badness, the Beadle, has been given a perfectly devious interpretation by Brian Yorck. Sam Sultan as Pirelli was a bit disappointing vocally.

Stephen Sanborn, director and conductor, has done decently by the play, exacting nuanced performances from his cast. He does even better with the large orchestra playing Sondheim’s music. This show, unlike other Broadway fare, is Sondheim’s American opera and the orchestra, under Sanborn’s control, delivers the music like a Debussy score, or a Bizet or Schubert composition: They play for subtle beauty in the music and deliver a strong score in such a way as to make you hear the inner souls of the characters. I wish the company had a third week of performances; so much would develop between the forestage and onstage companies.

Sweeney Todd: The Demon Barber of Fleet Street plays at Taconic Hills Performing Arts Center at the Taconic Hills High School, 73 County Route 11A, Craryville, New York, through Sunday, Oct. 13. It is a co-production with Roving Actors Repertory Ensemble Inc. For information and tickets, see the Berkshire Edge calendar or go to TheTwoOfUsProductions.org.