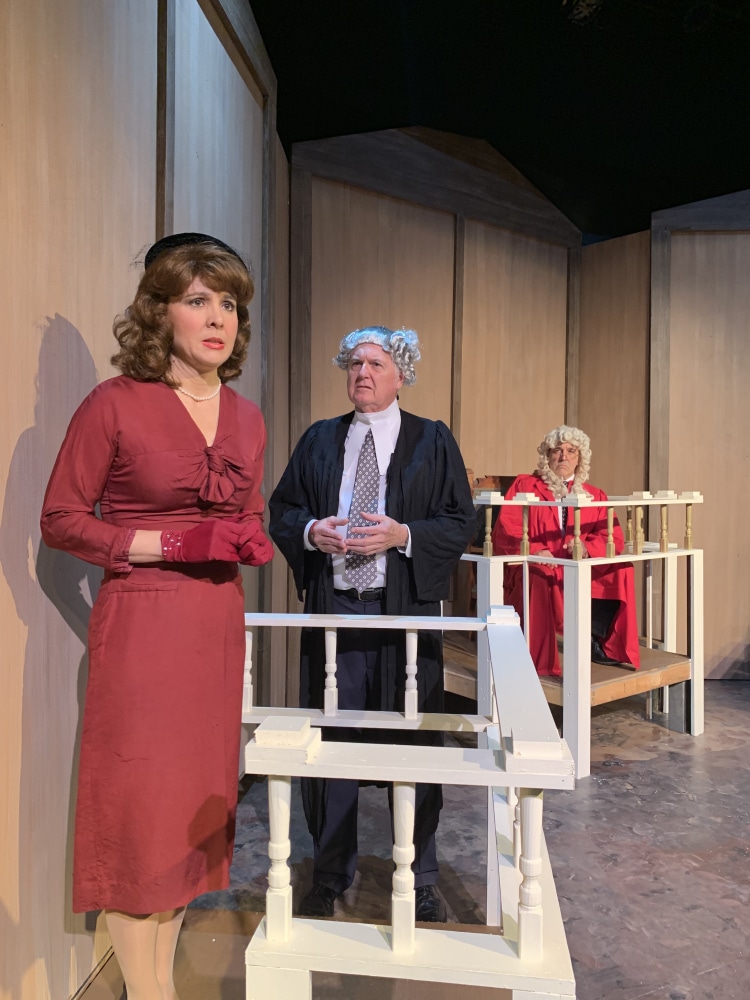 Jean Garner as Romaine, Steve King as Mr. Myers and Sky Vogel as the Judge in the Theater Barn production of 'Witness for the Prosecution.' Photo: Allen E. Phelps

Witness for the Prosecution
By Agatha Christie
Directed by Phil Rice

Agatha Christie wants you to follow every word, every shift of point of view, every philosophical statement, judgment and decision she has her characters make. Then she wants to surprise you, startle you, shock you and thrill you. This is how she wrote her stories, novels and plays. Most of the time she succeeded; even if you’ve seen one of her plays before at the Theater Barn (always the second show of the season), you probably don’t recall exactly how it ended and so each viewing is a thrill. This year the folks at the barn are presenting a Christie they’ve never done before, “Witness for the Prosecution,” in which a man’s wife agrees to testify against him. The outcome of her decision brings about swift justice for everyone concerned. It’s amazing!

Christie fans, like heavy-duty followers of Alfred Hitchcock, will remember his edition of the film, basically a blueprint for this stage edition of the story. Jean Garner plays the role of Romaine Vole, played in the movie by Marlene Dietrich. Romaine (rhymes with “ptomaine”) is the poison in the mix, a conniving and controlling woman who discovers a minute too late that she is not the only person in her world who can seize control of the outcome. Garner plays the seductress with a British simplicity that is superb. She wears her 1950s clothing well, sports a lush head of hair and speaks with an accent that says, “Yes, I’ve got this licked.” I liked her performance enormously.

As her husband, Leonard Vole, accused of murder, Nate Healey is remarkably passionate and attractive. Watch his hands and his face when the trial scenes are moving forward; he clearly suffers from performance anxiety—or at least his character does. It’s just perfect. His principal defender, Sir Wilfrid, is beautifully played with a fragility and a strength by John Noble, who takes advantage of every little nuance in the script.

The role of the victim’s housekeeper, Janet, has been taken in hand by Amy Fiebke, who has lost nothing in the time between performances at the Barn. She is wonderful as Janet, strong and adamant and inflated by her sense of importance. Everyone plays his or her role with a sense of Christie’s perfect formula for mystery theater. The entire company couldn’t be too much better.

Sam Slack’s turntable set is impressive on the Theater Barn stage, and Jade Campbell’s costumes take the place and the period into account. Ashley Hedgepeth does a fine job with the lighting for this play. But really, the accents and the stage direction by Phil Rice make the play, which could easily grow stagnant, into a fine and subtle piece of stagecraft. Rice really delivers here and Dame Agatha would be pleased to be the author of this rendition of this play.

Witness for the Prosecution plays at the Theater Barn, 654 Route 20, New Lebanon, New York, through Sunday, July 21. For information and tickets, see the Berkshire Edge calendar, call the box office at 518-794-8989 or go to theheaterbarn.org.