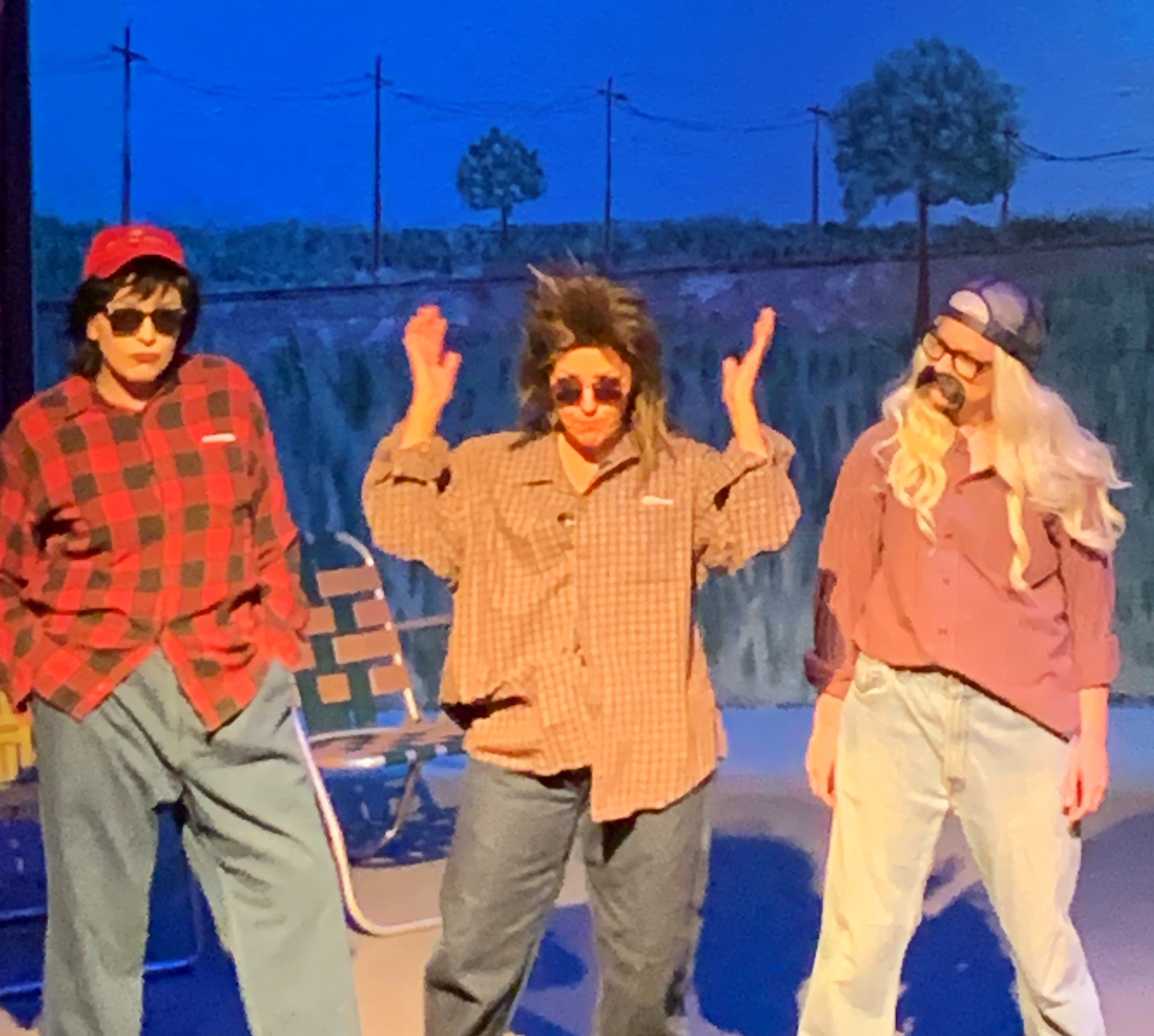 This is just an example of the logic expressed by folks who live in a trailer park in northern (read: panhandle) Florida at the beginning of this current century. It is overstated understatement; it is who they are. Norbert and Jeannie Garstecki are about to celebrate their 20th wedding anniversary and he has tickets to a show she won’t go to because of her agoraphobia: She cannot leave the trailer due to the fear that wells up in her whenever she tries it. High-school sweethearts married early, her heart has been broken by the kidnapping of their baby, who has never returned. It’s a setup that Gilbert and Sullivan might have used if they’d lived long enough to discover it. Betsy Kelso, though, has worked on it with the help of songwriter David Nehls, who gives the show ballads, blues and beautiful harmonies to amplify the emotions on display at the Theater Barn in New Lebanon, New York.

If you liked the use of a girl trio in “Little Shop of Horrors,” you will love it in this show as well. Led by longtime favorite Amy Fiebke, these three women sing, dance, cavort, play a variety of odd characters, and generally cheer up a dire situation: the impending separation and probable divorce of Norbert and Jeannie. Fiebke is a perfect central leader of this Floridian Greek chorus. They comment on the action, set the scenes and contribute their well-worn wisdom without pausing to think about it.

Fiebke is Betty, the trailer park proprietor from whom no secrets may be kept. She is hilarious in this role, one that seems tailor-made for her. Whether singing from the deck of the stage or high up on a pole, she never loses focus or lets her dynamic voice falter for an instant. She is just great!

Abetting her are two women who live in Armadillo Acres, the trailer park: Apryl Higgins as Pickles, a woman/child who cannot get her man straight (he’s working up north in summer stock, it seems); and Nicole Weitzman as Lin, a woman who has been working to keep her husband from the electric chair. Singing some wonderfully funny songs with Betty, they jointly narrate the plot and keep the audience in stitches doing it. Fiebke and friends are good enough a show themselves to justify the price of the ticket, which is generally only $29, by the way.

Nicholas David Grevera, Norbert, is a man with a man’s dream of a problem: He has two women who love him. His wife is just one of them. Jeannie, the long-suffering woman married to Norbert, is played here by Andrea Schmidt. Her suffering does not come from him but from her guilt over the loss of their infant. Jeannie has a real problem and doesn’t seem to want to save herself. Her attempts are half-hearted and don’t result in anything gratifying. She supports Norbert in all decisions until he makes one that she cannot accept: He finds another woman with whom he can share his sexual urges and his deep need for consolation.

Schmidt has a beautiful voice, one that often rings with humanity and passion. “Owner of My Heart” in Act 1 and Act 2’s “It’s Never Easy” and “Panic” all serve her well in this show. Andrea receives easy compassion from an audience that sympathizes with Jeannie even through her odd quirks. It’s a truly lovely performance.

As her rival for Norbert’s love, Pippi, the stripper, played by Jill Engstrom, is wonderful competition. She can provide everything Jeannie can’t, including hot sex and travel possibilities. Engstrom dances and sings with a high pole, physically encroaches on Norbert’s shaking body (he is a man similar to Seymour in “Little Shop”), and displays both verve and nerve when it comes to the more difficult plot points. Again, it’s a very fine performance with quirky twists from top to bottom.

None of this would work without a perfect Norbert, and he is provided by Nicholas David Grevera. It is fun to watch this man play a fellow torn between a man’s fantasy and his reality. Norbert has a real problem: Giving up either woman would plunge him into uncomfortable worlds. He wants what is best for himself but he doesn’t know what that is any longer. And with both women’s trailers parked next to one another, finding the perfect solution appears to be impossible. Grevera plays this touchy problem perfectly.

There is one more character: a menacing (remember the dentist in “Little Shop”?) biker named Duke who cannot keep away from Pippi. He is played with gusto and force by Levi Squier. In typical Gilbert-and-Sullivan fashion, he turns out to be the answer to all questions unexpectedly, and the show’s humor, which is often very sexual, is graced with his presence.

Alyssa Meyer has directed her talented company very well. Emotions play out beautifully and musical numbers are performed with immense grace, even with Fiebke flying from a flagpole in the first act finale.

Sam Slack’s sets are ideal and Kyle Harvey’s costumes are just trashy enough to grace a trailer park, while Jake Jamros’ lighting design seems to be just about the best you can find in such settings with a typhoon on the horizon. Opening night’s minor glitches will, I am certain, be remediated and the show should be a crowd-pleaser for its two-week run at the Barn.

I didn’t remember enjoying the show this much the first time the Theater Barn offered it in 2012, but when I consulted my review, I found that I had. This time around I think I enjoyed it even more—that’s a very good thing, and so is the show.