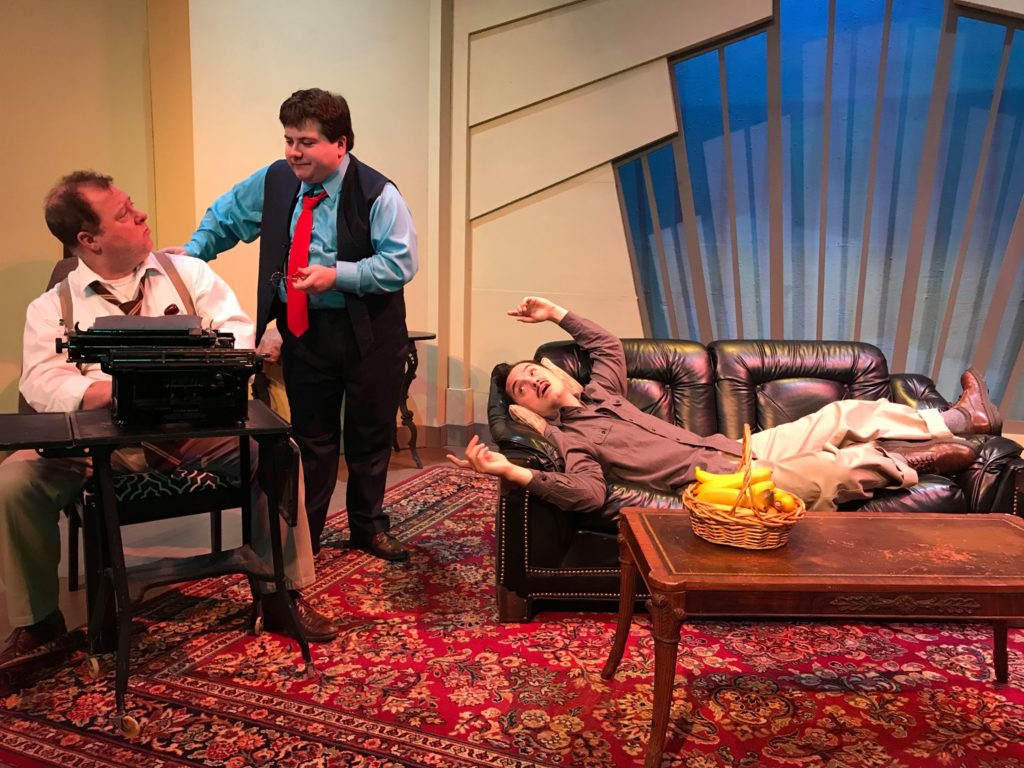 THEATRE REVIEW: the Theater Barn’s ‘Moonlight and Magnolias’ makes us laugh while learning something

Moonlight and Magnolias
By Ron Hutchinson
Directed by Sky Vogel

“People want to see something that’s not what they’re living.”

It’s a philosophy about our lives that has always been true but rarely spoken out loud: Whether it’s television, or movies or theater, we don’t want utter realism; we want the fantasy, the unachievable, the mystery that is only available to most of us in someone else’s performing of it. It’s one reason the movies are so popular. And it’s a theory that David O. Selznick, the movie producer, espouses. He says it in this play by Ron Hutchinson about the hard-won final script for “Gone With the Wind,” supposedly achieved by locking the producer, his director and a famous re-writer in a room for a week. The question isn’t “is this a true story?” but rather, “is it a story worth telling, and what is its purpose?” While it does educate its audience, its true purpose is to make us laugh while learning something; and the truth is that in this fine production directed by Sky Vogel, it succeeds in both purposes all at once.

David O. Selznick, in the midst of filming “Gone With the Wind” in 1938, fires his director, George Cukor, and hires one of Clark Gable’s favorite men, Victor Fleming, to replace him. Gable is playing Rhett Butler in the film adapted from the Margaret Mitchell novel. According to Selznick, the script — very literary rather than filmic — is not working and neither is Vivienne Leigh. He drags journalist/playwright Ben Hecht into the picture, getting a five-day commitment out of him only to discover that he hasn’t read the book — probably the only American who hasn’t. So he drags his new director, Victor Fleming, into the room with them and forces him to act out the book for the writer. So we have three men securely sequestered in a room for five days and nights, hammering out a film version of the novel as Fleming and Selznick play out the entire novel, scene by scene, sequence by sequence.

Emma Simon as Miss Poppenghul and Michael Baldwin as Victor Fleming in the Theater Barn production of ‘Moonlight and Magnolias.’ Photo: David Louder

Mitchell, raised in Atlanta, was a stickler for detail and Selznick wants to remain true to her work, even if it isn’t easily transformed to actual images on a screen. Accused of other motives by Hecht, the play rests on the writer’s reluctance to be faithful to the 1936 book and the producer’s faith and trust in its possibilities in spite of being one of Fleming’s least favorite things: a movie about the Civil War denizens who populate the story.

The three men are assisted by Selznick’s private secretary, Miss Poppenghul, played by Emma Simon. Simon is a very funny actress, both in her physicality and her verbal presentation; she seems to be right out of the Bronx, totally acquiescent and still in control of most situations. Her physical comedy, particularly in the final act, the morning of the fifth day in the play, is nothing short of hysterically funny. Doing backflips and falls with a leather couch as her only ally, she brings down the house distributing bananas and peanuts to the inhabitants of the room. As directed by Sky Vogel, she nearly steals the show from the very hardworking men. But this actress is clearly a team player; for though her infrequent scenes give her plenty of scope to amuse us, she also finds the pathos of the character’s position — working for a maniac — and we feel some compassion for her as fatigue allows her to exploit those comic skills.

Fatigue plays a major role in this play, for five crazy days are played out in the two hours the play takes to perform. The writing clearly means the play to rush onward; though it only takes two hours, it feels as though we’ve been with these characters for a lot longer. Director Vogel capitalizes on this, working the men at a frantic pace, lines falling out of their mouths as they develop the shooting script. 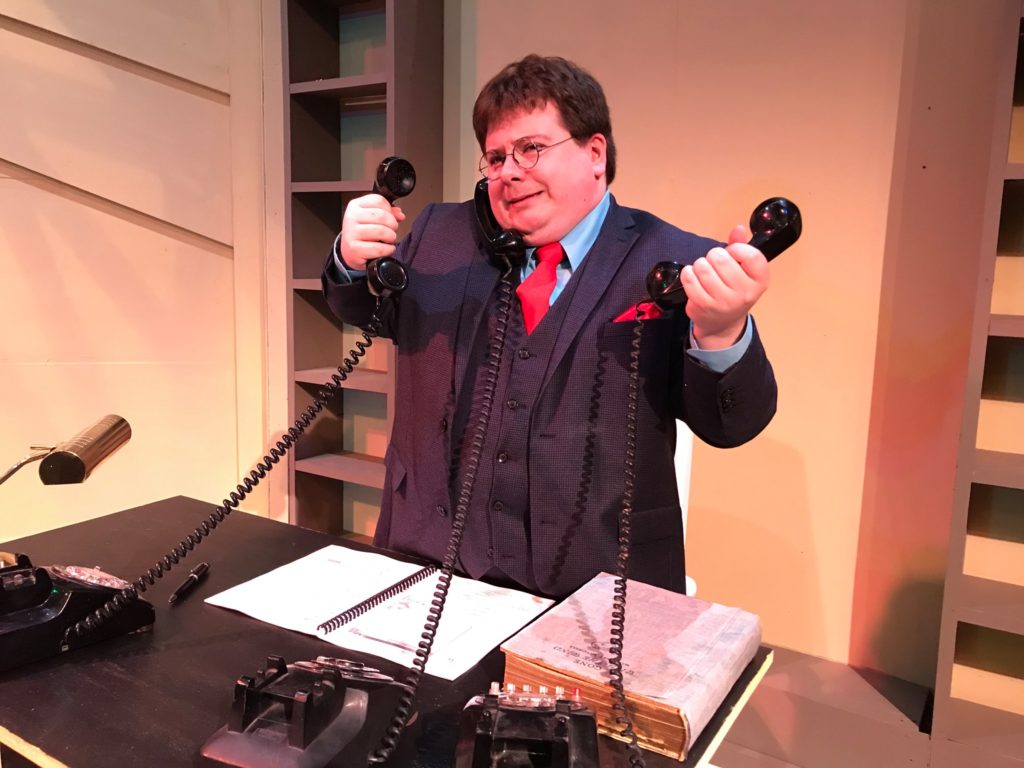 Ryan Palmer is the frenetic and harried Selznick. It is through him that we feel the exhaustion that builds naturally in this play. His twitching feet at the start of Act Two are as sadly ridiculous as any of his funniest lines. Michael Baldwin’s groggy director playing Butterfly McQueen’s Prissy is one step shy of hysterical. Mark Schane-Lydon, in one of the funniest roles he has played to date, gives the high moral standards of Ben Hecht a brilliant shine and a humorous vision of militant reformation. Their scenes run the gamut from spiritual to sophomoric and not even the Marx Brothers could have made more out of them than these three men do. I laughed at most of their judgment calls and all of their amateur portrayals of Gable, Leigh, Olivia de Havilland, Leslie Howard and others. When Schane-Lydon’s Ben got indignantly moral over racial and religious issues, it was impossible not to let laughter reign. Palmer’s self-defense on religious identity in Hollywood hit hard in this age of Trumpism, and Baldwin’s simplistic reality as the “not Jewish” Fleming struck just the right chord of silliness.

It is rare for a trio of actors so different in style to play so well together in this sandbox of a messy second-act set, beautifully designed by Sam Slack. David Louder’s costumes fit these men so well that their 1930s design sense, committed to the show’s reality, seemed to be the perfect clothing for the actors (including Emma Simon) themselves. Allen E. Phelps’ lighting design was perfect to the moods of the play and even the few mistakes in calling the show didn’t take away from the overall entertainment going on. The same should be said for the fine sound design work by Joseph Sicotte.

This show ends the Theater Barn’s season and laughter is the right complement for the work delivered this year. “Moonlight and Magnolias” proves to be the ideal choice and Sky Vogel the perfect director for the project. Not a laff riot, it is a very enjoyable evening of history/comedy with enough honest laughter to make you wish for just one more gag, or one more funny truth to come along. But still, you get a good yock every few minutes and that’s perfect for an autumn evening of theater.

Moonlight and Magnolias can be seen at the Theater Barn, 654 Route 20, New Lebanon, NY through Sunday, Sept. 22. For information and tickets, see the