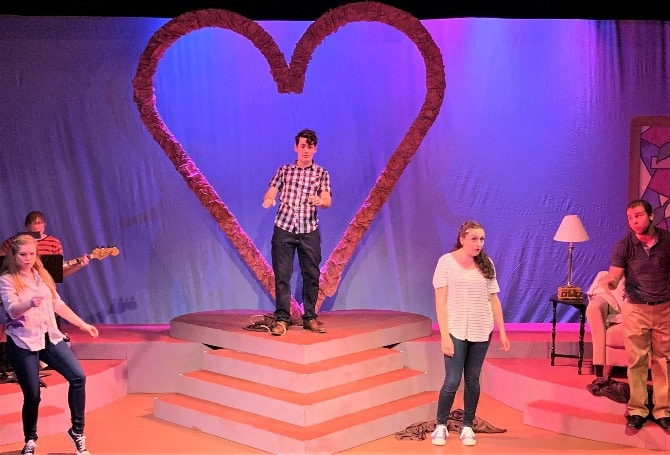 “It’s really what I want my life to be.”

This is a 2018 version of the 1996 original, which was done at this theater about eight years ago. The show ran off-Broadway for 5,006 performances and, for the life of me, I can’t imagine exactly why. There’s nothing wrong with it, but it isn’t enthralling. It doesn’t contain a single hit song and the sketches are a bit simplistic and, though funny, not very humorous. And very little in the show pertains to the title.

It’s all about love. There’s little else to sing about, apparently—except, now and then, marriage. Two men, two women, basically seen as two couples, examine the ins and outs of relationships until they finally reach the point of the title: Each one is just right, but if you’d only change, you’d be all right, too.

A few numbers are better than others, but it really is just more of the same from a different point of view. It is the performances here that save the evening from becoming a yawn. (Maybe I’m just too old, experienced and even too jaded to get into this show. Maybe.) I did like “A Stud and a Babe,” “A Picture of His . . . ” “Always a Bridesmaid,” “Marriage Tango” and “The Very First Dating Video of Rose Ritz.” Three of them are sung by Woman One.

Apryl Higgins, Woman One, has a powerful voice, almost Mermanesque in its volume and its persistence on a single note, but sweeter on the ear. She is very pretty and she gets character into her songs. She is a major talent and leading lady in repose in this show. A real role will give her a chance to show her acting chops, an opportunity missed in this revuesical.

As her frequent vis-a-vis, Richie Dupkin delivers in the world of comic character stretching from inept lover to betrayed manchild. His singing voice is not the finest but he holds his own with this limited material. It is hard to imagine him in a leading role just yet, but the comic lead, seemingly his thing these days, is definitely right up his alley. He pairs well with Higgins, who outshines him most of the time, which feels just right with this show’s insights or lack of them.

The man playing Man Two is Nicholas David Grevera, an actor whose personality changes from number to number and whose face follows suit. I enjoyed his work very much in this slight show. In “The Baby Song,” he was downright adorable, which is a nice surprise.

The real “star” of the show, if this show has one at all, is Nicole Weitzman, who takes on most of the honestly comic bits. She plays young funny folk and older funny folk and even gets in a sentimental mood for a moment or two. As the eternal bridesmaid in a striptease number, fellas, she is the best Gypsy Rose Lee clone in a long while. This is the funniest number in the show and it gives the second act a much-needed kickoff. Weitzman is wonderful to watch as she makes it clear that she is having fun with the material, which is exactly the style it needs. Weitzman is funny. That’s all I can tell you.

The show is a popular favorite here, happily brought back by artistic director Allen E. Phelps. He is ably assisted by director Paul Urriola, who has a nice grasp of the humorous stage picture. His work with this talented cast is outstanding. The production has the luck to have Sam Slack design the set with its unique broken-heart aspect. Jade Campbell’s costumes are great. Jake Jamros does a neat job designing the lighting and stage manager Kaelyn Fuld called a perfect show.

Kevin Wallace, the music director, has brought in two wonderful musicians—Robin Tucksmith on bass guitar and Laura Hamel on percussion—and with himself at the piano and all three visible on stage, the musical sounds are truly wonderful. The songs they play are all intended to amuse and entertain, and that they do. It is just that, for my taste, the show is missing a hook, one that holds the audience fast. But there are enough fine things on the stage to suggest you consider seeing “I Love You [I like you, actually], You’re Perfect [the people, not the play], Now Change [please do!]. On a hot summer evening, it’s good to sit up and laugh a little.

I Love You, You’re Perfect, Now Change plays at the Theater Barn, 654 Route 20, New Lebanon, New York, through Sunday, Aug. 4. For information and tickets, see the Berkshire Edge calendar, call the box office at (518) 794-8989 or go to www.thetheaterbarn.org.