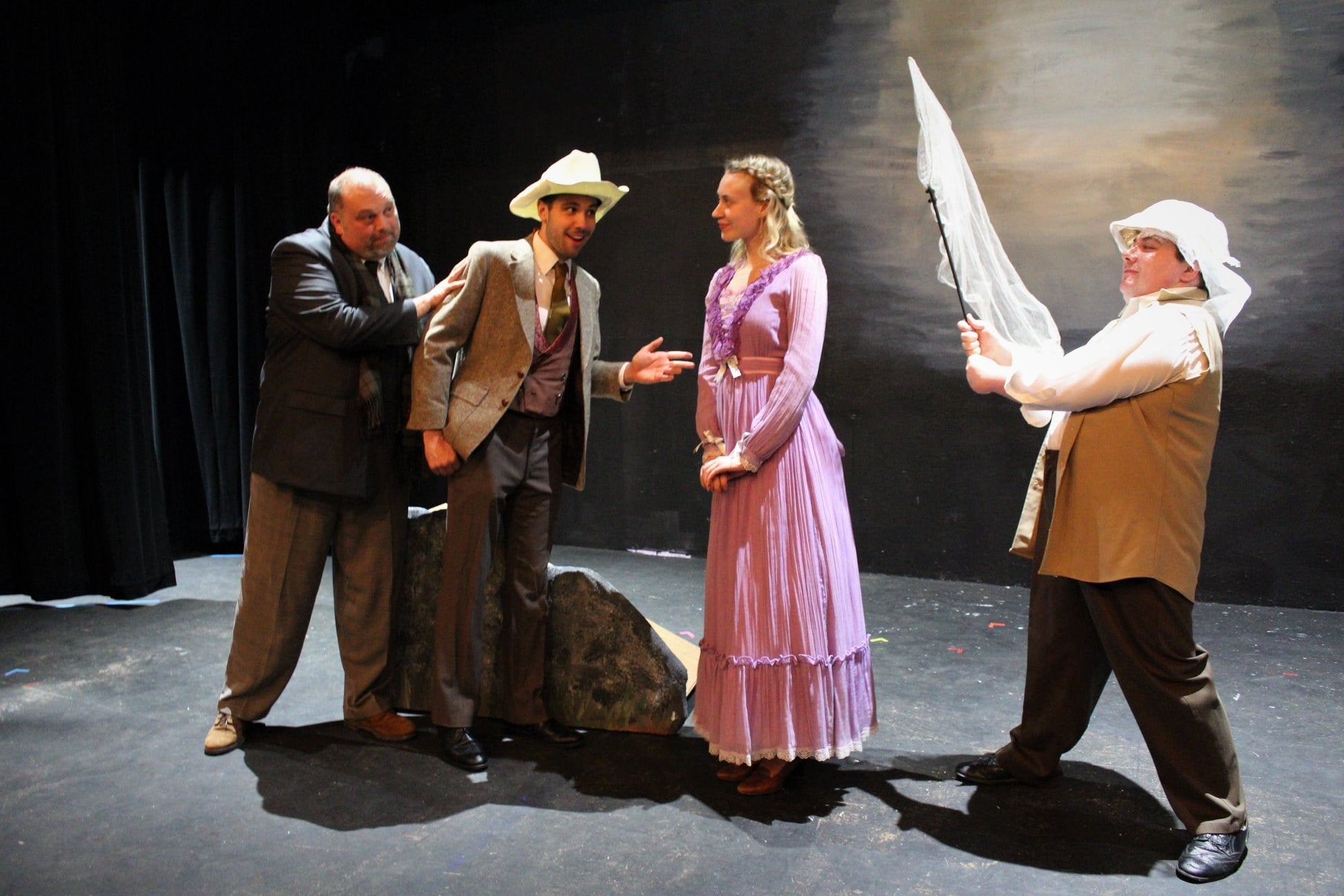 When a play is as funny as this one, you are bound to have a good time; that is indisputable. Ken Ludwig, author of “Lend Me a Tenor,” puts his particular comic spin on a classic Arthur Conan Doyle Sherlock Holmes story, “The Hound of the Baskervilles,” and without missing a single plot point, without changing or mimicking anything in it, presents a very funny version of the adventure.

At the Theater Barn in New Lebanon, New York, the company there shows us just how five people can play 45 characters and never miss a beat or confuse one accent for another as they present this Doyle work that almost everyone knows by heart by now in a new and very funny fashion. If you don’t live in Columbia County, waste no time getting directions and making a reservation, for this is one show you shouldn’t miss.

Three-quarters of the comedy comes from the actors themselves as they change characters, change costumes and wigs and hats, change personalities, and sometimes change the rhythm of this show. One of them, Alec Lee, plays the last living Baskerville, the romantic and sympathetic Texan dropped into the British moors in Devonshire. He has just inherited a position in Parliament, a nice piece of property and all of the accumulated Baskerville wealth with the death of his cousin, the show’s opening moment. Upon his arrival in England, he is met by the first of the dastardly and confusing people with whom he will be confronted and confounded for the next two hours.

The older Baskerville has been murdered by the mythic hound that haunts this family due to a witching curse. Asked for help, Holmes assigns the case to Watson, who accompanies the American to Baskerville Hall and agrees to stay with him.

Lee is wonderful as the new Lord Baskerville and also plays a wide assortment of other characters throughout the play. He is very good with the accents and the body movements that define the other characters, from his goose-stepping servant to Inspector Lestrade. Lee gives it his all.

His equal is Liz Woodward, who plays not only the principal female roles, but also slum kids, bumpkins and a voracious Mrs. Hudson, who has her psycho-sexual eye on Holmes. She is truly funny as Mrs. Hudson and delightful in her other roles.

The third actor plays a whole host of irregular human beings including doctors, lawyers, butterfly hunters and so much more. Ryan Palmer undertakes these parts that range from villains to maniacs to comic caricatures to surprisingly sympathetic people caught in the web of the dastardly dog-keeper.

Matthew Tyler plays the distant and remote Holmes as well as anyone ever has. His dispassionate and aloof personality, one that comes alive in the unexpected moments such as his connection to the boys, his irregulars, and his occasional attention to a woman, as well as his sudden regard for Watson when this friend and companion faces regretful turns. Tyler plays the straight man to everyone else’s second banana in this burlesque of the classic Holmes yarn.

Aaron Holbritter’s Watson is a quintessential character turn. He is equally adept at playing the pomposity of the man as he attempts to impose authority over matters and the pathos of a man devoted to a friend’s profession to which he also aspires. Watson is more the star in this play than is Holmes, but Holbritter maintains the respectful relationship with Tyler’s Sherlock that is expected of this character. It is easy to warm to him as the play progresses and without the silly sensibility of many of his portrayers in the movies.

The sets by Sam Slack deserve a standing ovation of their own for their usefulness, their flexibility and the laughter that is often brought about by their appearances. Jade Campbell’s costumes are about the best quick-change work I’ve seen in a while and the lighting by Jake Jamros was especially well done. The unknown sound designer has also contributed nicely to the overall effectiveness of this show.

Phil Rice could probably make a garbage pail appear humorous. I think he’s one of the finest directors of comedies this area has seen. This play is no exception as he wrings laughter out of even the simplest gestures. This is just simply one of the finest plays of the 2019 summer season and one that ought to be seen.

Baskerville: A Sherlock Holmes Mystery plays at the Theater Barn, 654 Route 20, New Lebanon, New York, through Sunday, June 30. For information and tickets, see the Berkshire Edge calendar, call the box office at (518) 794-8989 or go to www.thetheaterbarn.org.