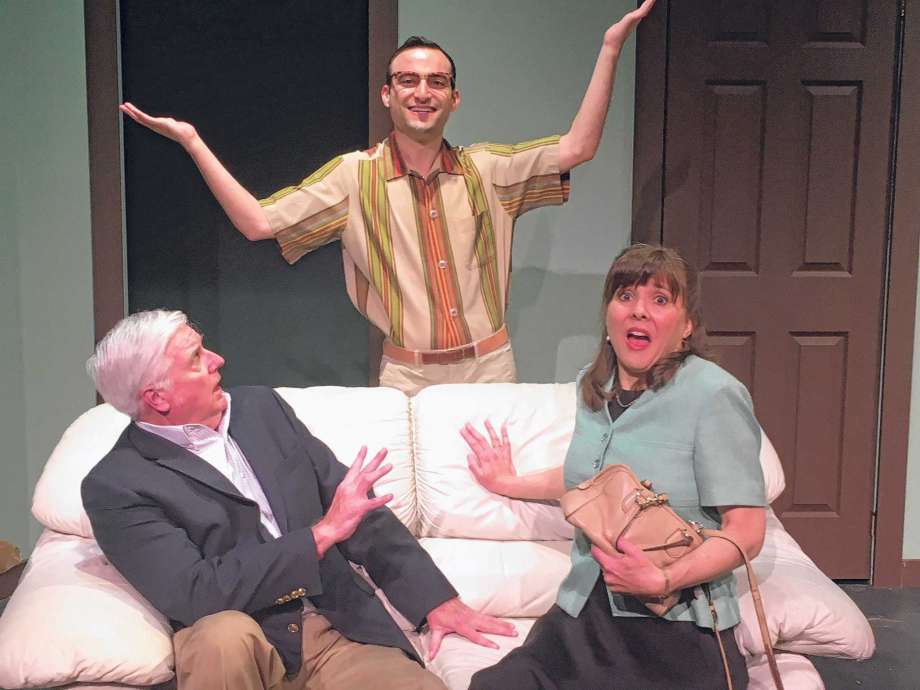 THEATRE REVIEW: ‘The Nerd’ at Theatre Barn, perfect comic relief for our time

The Nerd
By Larry Shue
Directed by Phil Rice

Just turn around … and hum!”

In a first-act party, an interloper demands that everyone play a game called “shoes and socks” in which they all must wear paper bags over their heads and turn around and hum until given a signal to stop. The signal really never comes, but that’s another story. What is important to know here is that the man calling the shots is as obnoxious as the game he wants to play. This is the title character in Larry Shue’s “The Nerd,” which opens the Theater Barn season this year. Not a farce this time around but a screwball comedy given lightweight heft by director Phil Rice, the theater’s comic edge is touched with small strokes of genius as Rick Steadman, the nerd of the title, intrudes on the hospitality of Willum Cubbert, whose life Steadman saved in Vietnam. Set in Cubbert’s home in Terre Haute, Indiana, in 1981, the play covers a week in the life of this young architect who cannot get his life and career into honest focus, and the show’s two acts give us a sense of his process of taking matters into his own hands and resolving problems that gently plague him — a serious step forward in his life. 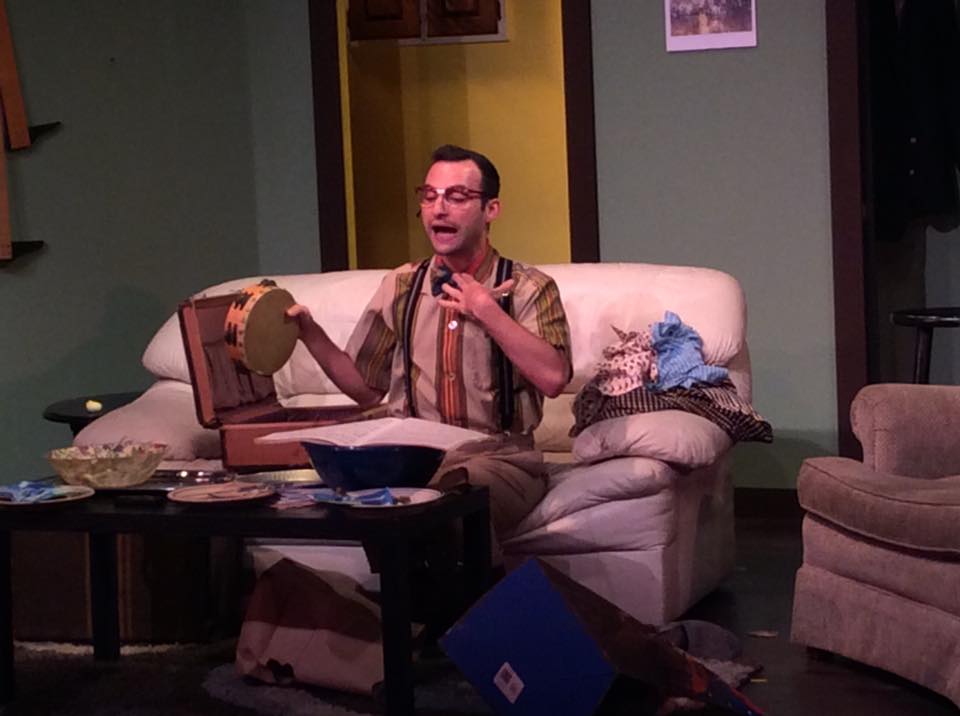 Willum provides living quarters for two close friends, Tansy McGinnis— who is in love with him but resolved not to let him know it as she pursues a television career in weather forecasting — and Axel Hammond, a slightly inebriated, slightly effete theater critic whose extensive friendships with actors lead to the comedic concept of the play. It becomes increasingly clear that the drinking and the wit may be a facade for a closeted gay man whose relationship with an actor named Kemp may be his chief rationale for moving Willum’s personal life into high gear. Whatever his motivation, his motive is obvious: He wants to start the ball rolling for his two closest friends.

Andrew Colford plays Willum in as dry and collected a manner as possible in a near farce. It is not a giveaway to say that he is the straightest character in the play — a former soldier with an artistic mind who never wants to see the bad in anyone, a trait that almost leads him into a disastrous business relationship with a wealthy older man played by Steve King. King is a master of the slow burn, that art of the delayed reaction that can be so much fun to witness. In the second act, he deals with cottage cheese as only a fine clown of drama could. He makes serious one of those comic situations that visually tickle and delight us. He does this perfectly.

Colford has that awful responsibility of being the eye of the storm. Other characters take the lead in most of his scenes and, although the story is about him, he skims the surface and slides around the periphery of the play leaving an impression of someone extremely nice. But his attitude makes us ask: Is being nice enough? Colford pulls this off with charm and we are always on his side even when we disagree with Willum’s choices. 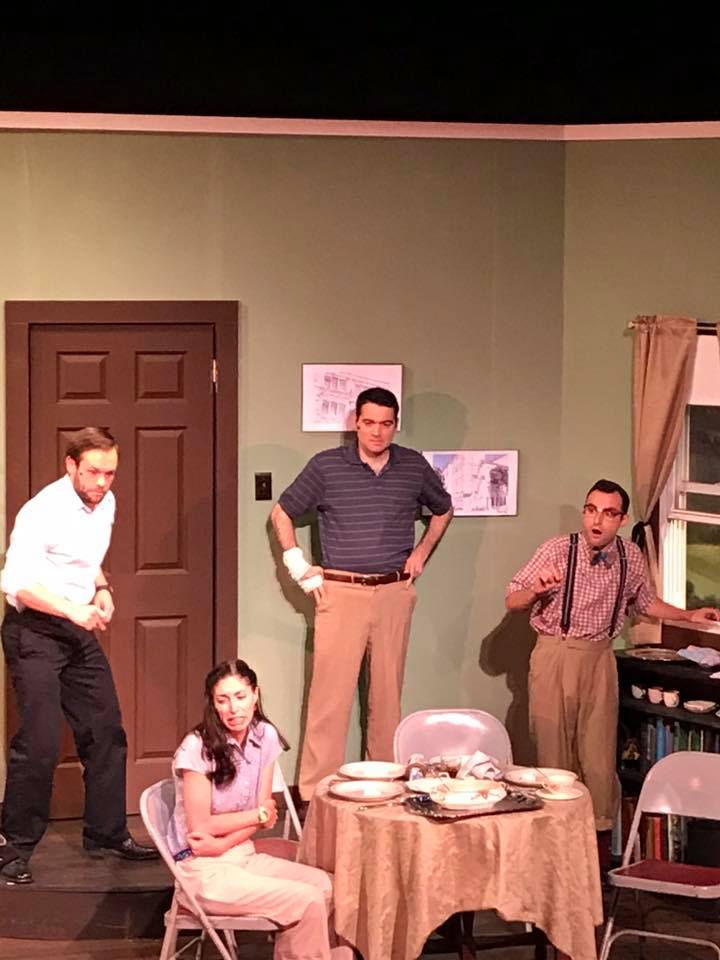 Jean Garner plays King’s wife, Clelia, and her physical comedy in the game sequence is just delightful. Young Mason Hutchinson plays their son, Thor, who is a thunderer, frightened by costumes and masks and never quiet or gentle about his reactions. Hutchinson plays him very well, including his fainting scene.

Cara Moretto plays the woman on, and in, the scene. Her Tansy is a woman torn among personal pride and need and her natural warmth towards friends. She is physically always on the precipice—we can see her brace herself against the impending fall. She gives Tansy a reality that the lines deny her. Her humanity is evident in everything she does.

It is Brett Epstein as Rick, the Nerd of the title, who has the most elaborate character to play. For one thing, he is playing an actor playing a role off the stage and in a real situation, but one who seemingly believes that all the world IS a stage and all the men and women in it merely players. Rick builds people up to take their cues seriously even though they’re not aware of this unique manipulation of their minds and hearts. He is the world’s most accomplished improvisation artist, unbeknownst to himself even, and his game is played out in delicious end-to-end sequences in which he is the least influenced member while secretly the most in control.

Epstein, as directed by Rice, gives a world-class performance as the man behind the men behind the man. As outrageous as the Nerd can behave, Rice has his other three principals as physically involved as any actors could be in such a situation. David Louder’s costumes show off the folks within the confines of their basic characters and represent the period decently. Playing for 441 performances in 1981 and 1982, the play originally starred Mark Hamill, Robert Joy and Peter Riegert; it was directed by Charles Nelson Reilly, the comic actor whose characters were always assumed to be gay. This version is lit by Karissa Monson, who keeps everyone visible.

If you feel the need to laugh at something not on the television news, this is currently your best option. If you just want to enjoy a piece of theater that doesn’t demand that you think about anything, I’d say this is where you belong. If it’s young talent that grabs you, then this play will satisfy your itch for future grabs. It seems likely from their performances as this quirky septet of people that the Barn has started out with an almost perfect opening gift — can you believe that this theater is only 35 years old this season when they create and offer so much good work so much of the time?

The Nerd plays through Sunday, July 1, at the Theater Barn, 654 Columbia Pike (Route 20), in New Lebanon, New York. For information and tickets, see the Berkshire Edge calendar, go to www.thetheaterbarn.org or call the box office at (518) 794-8989.