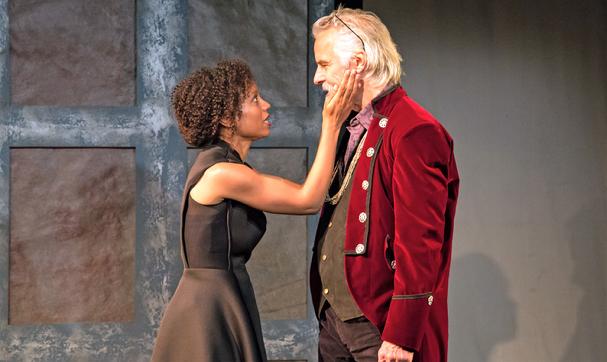 The Last Wife
By Kate Hennig
Directed by Kelly Galvin

Oh, those 1500s! Everything was about sex, it seems – so like today. Playwright Kate Hennig has taken her story and her characters from the late 1540s when King Henry VIII was making his move on two-time widow Katherine Parr, hoping to make her his sixth wife, and has moved the story in many ways into the 21st century. At least in tone and style. At least in rhythm and grace. Hennig has done a superb job with this transformation and we get to watch these historic characters – along with Henry’s three children Mary, Elizabeth and Edward and also the sex-tool courtier Thomas Seymour – play out their story in easy language and physical familiarity. Under the skilled direction of Kelly Galvin, the play, produced by WAM Theatre on the Elayne P. Bernstein Stage at Shakespeare & Company in Lenox, Massachusetts, gives us more than just the story; it brings us the people – quirks, attitudes, lusts, loves and hates – with the intensity of witnessing our neighbors through their windows that have been left open and their doors left ajar.

We enter the theater thinking we know the story. We leave, two and a half hours later, knowing we never knew the half of it. I should say upfront that “The Last Wife” is very good theater. It is compelling and enthralling and the acting of this wonderfully finessed script makes it so very immediate. Those actors are deliciously comfortable in their roles and they play together with an intimacy that is rarely experienced. Katherine, more often called Kate, has an intensely felt desire for Seymour, called Thom. With a legal mind, she drafts a marriage contract with Henry, sometimes called Hal, and her life with him is instantly affectionate even to the treating of his scabrous wounds. She hugs Henry’s children, even Mary, her own-age schoolmate. Thom and Henry have a physically close relationship. All the embracing in this play, however truly felt, often masks the opposite in reality as these people vie for control of many things including government and one another’s love.

John Hadden is wonderful as Henry, a man whose mood can spin 180 degrees at the sound of a single word. His voice and his demeanor are magisterial and his physical pains are clearly visible as he continually tries to rule each and every situation he confronts. Hadden makes romance chillingly real and he treats power the same way. His Henry is extremely consistent and it is a wonderful performance to watch in modern-day vernacular.

David Joseph plays Thom with a dark sensibility I have never seen in his work before this. With this role he takes a leap forward into the actor’s capabilities. Handsome and graceful, he brings to Thom an utter reality that shows us all of his sides, not just the romantic. This is a perfect role for him and he uses it to expand his acting horizons. We alternately root for the man he plays and wish him no real accomplishments. This is an actor’s dream role and Joseph takes advantage of it, as he should do.

The royal daughters are played by Lily Linke (Mary) and Alicia Piemme Nelson (Bess). Both are delightful but for one visual aspect: Bess is raven-haired while Mary is a brilliant redhead – just the opposite of the real pair (a couple of wigs would have helped with this). Linke’s Mary is a hard young woman, jealous of everything, mad about her circumstances and actually nearly mad as a result of her unfortunate life. Linke plays every hard edge of Mary to perfection. Nelson’s Bess is a frivolous young thing whose entire aspect is devotion to education, young men and her new stepmother, all with equal passion. Nelson is almost the comic relief of the troupe – almost, but not quite. Instead, she is a wonderfully young girl with the motivation of the future Queen of England. Both women are delightful. As their brother, Eddie (Edward VI), Raoul Silver delivers very nicely. He is a convincing young actor who should enjoy a handsome career.

It is Kate upon whose head the kingdom rides and it is Nehassaiu deGannes in that role upon whose head the play lives. DeGannes holds her head high and the play stays paramount. She is the sort of actress whose gaze focused on another player focuses us on that person as well. She has a relaxed sense of purposefulness that brings her audience into contact with the people and their shared emotions. Her voice is lovely. Her face is ever-changing and impossible to ignore whether she is speaking or reacting to things being said by others. She has that trick, though, of showing an audience where their attention belongs while still holding us in her thrall. In this role, she is outgoing, a strong woman whose strength lies, in part, in her softness. She attracts the others as honey does a fly. She is the queen bee who, herself, never stings but only earmarks her targets for sometime later. This is a perfect role for the actress and she is perfect in it.

The quirky costumes by Stella Schwartz help to define the people and subvert the era. Juliana von Haubrich’s functional set works well in the open, three-quarter space. Aja Jackson’s lighting provides mood and maintains us always in interior spaces. Alex Sovronsky’s sound and music aid the play as they should. Kelly Galvin moves the people, the play and the modernization with ease.

WAM’s production won’t last forever, which is a pity, for it should be seen by as many people as possible. “The Last Wife” was a power in England for a short time, but she made a difference: So does this play and the people connected with it.

The Last Wife plays at the Elayne P. Bernstein Theatre at Shakespeare & Company, 70 Kemble St., Lenox, Massachusetts, through Sunday, Nov. 5. For information and tickets, see the Berkshire Edge calendar, call the box office at (413) 637-3353 or go online to WAMTheatre.com.