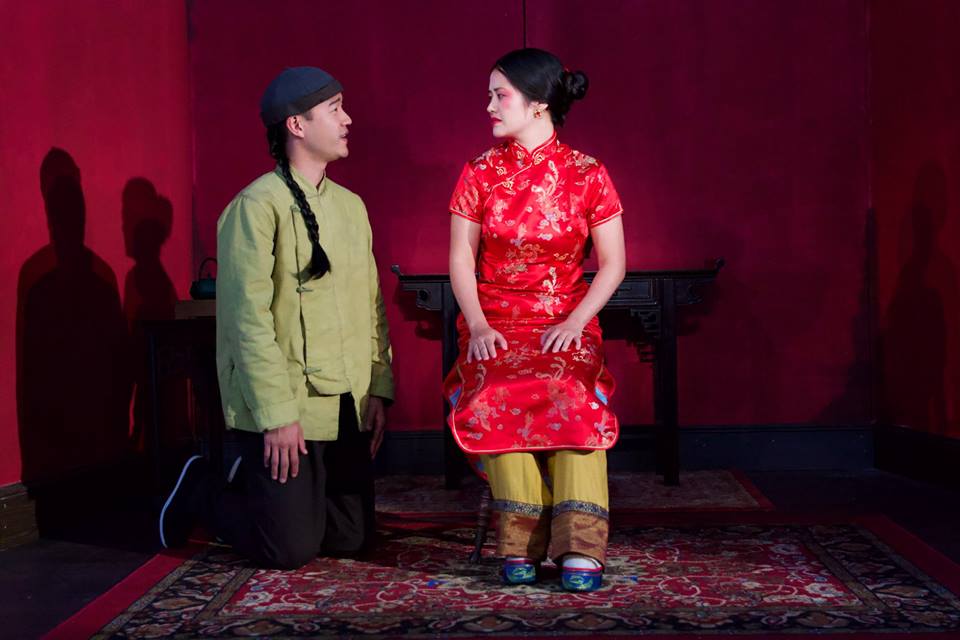 The Chinese Lady
By Lloyd Suh
Directed by Ralph B. Peña

Without diminishing the captivating premise of “The Chinese Lady,” the American experience through the eyes of first Chinese woman brought to the U.S. in 1834, the real star of this world premiere at Barrington Stage Company is the set designed by the Jonghyun Georgia Lee. A boarded-up, huge, wooden crate labeled “China Cargo,” which fills up the tiny St. Germain Stage, is swung around and opened up to reveal, like an anthropological diorama the 14-year old Afong Moy, shipped from Beijing, posing amid art and artifacts of her native land. With stunning theatricality, the stage is set, literally and metaphorically, for Afong Moy to remain “boxed in” yet age (multiple scenes carry her through 1902, at the age of 82) and observe 19th-century American history, always as foreigner, always as the other. Like an exotic curio, Afong starts out as a marketing display in the showroom of American importers and then as just another feature in P.T. Barnum’s sideshow, from which she tells us she is “here for [our] entertainment and information.”

Playwright Lloyd Suh, affiliated with the Ma-Yi Theater Company, which co-produced with BSC, confronts a potential wealth of storylines to dramatize what very little is known about the real-life Afong, but the effect ends up more intellectual than emotional. Alighting over the 19th century, Afong relates the tragic humiliation of her own people in the Opium Wars and later their cruel exploitation as immigrant workers in the gold rush in the American West. Suh’s Afong properly informs about the Chinese Exclusion Act, which outlawed Chinese immigration (when cheap labor in the mines was no longer needed). Through Afong, Suh muses about the philosophic nature of history, cultural appropriation and similar serious topics.

There are poignant revelations in “The Chinese Lady” that American jingoistic textbooks have swept under the rug. As Afong, both as historical commentator and autobiographical narrator, the charming and skilled Shannon Tyo modulates her performance appropriately. But one wonders if the play would have more emotional resonance if Afong’s story was personalized more and politicized less. Afong was tough enough to survive, so her distant cool is comprehensible, but where are the emotions of objectification, dislocation, fear, loneliness, pain and suffering she surely endured in New York in the 1840s? She must have been like a stranger on a strange planet.

Suh seeks to unify the audience with the Chinese lady when Afong admonishes us to look at her for the person she is because “to be looked at long enough is to be understood.” In the final scene, from an afterlife in the now, Afong literally steps out of her box to explain the contemporary relevance about “the information  … she (was) here” to have presented. At a time when Latin American kids are being ripped from their mothers’ arms at the border and when Muslim populations (instead of Chinese) are being barred from entry, we can connect the dots ourselves.

Ralph B. Peña directs cleanly and straightforwardly, orchestrating artfully the shifts between scenes. Fabian Obispo’s music soundtrack between scenes is smart and sophisticated. (His wry selection of a pop ditty for the curtain call is wonderfully ironic.) Daniel K. Isaac is fine as Afong’s manservant and interlocutor. “The Chinese Lady” is a lovely production of noble au courant import but, countered a little differently, more drama might flow from Afong’s heart than the history the playwright corrects, no matter how rightly.