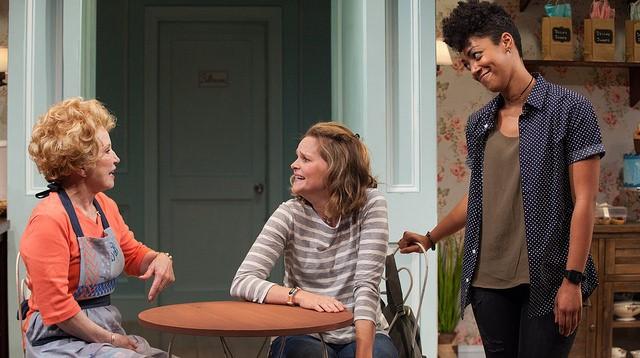 THEATRE REVIEW: ‘The Cake’ at Barrington Stage: It’s a hit!

The Cake
By Bekah Brunstetter
Directed by Jennifer Chambers

“It can be beautiful … when it happens.”

North Carolina. Now. A bakery specializing in designed cakes. A couple seeking a special cake for their wedding. A bigoted baker refusing to honor their request, accept their business. Not the substance of a comedy, you say? Guess again. At Barrington Stage Company, this very relevant hot-button topic forms the substance — the batter, if you will — for a big, beautiful, comedic special event called “The Cake.” It stars, and I mean stars, Debra Jo Rupp as the baker with dreams and delusions, desires and desserts. For her character, Della, the art is in the doing and the doing requires care and precision and the exactness provided by a recipe for success. Della’s world is turned upside down at least five times in this play having its second production in Pittsfield, Massachusetts, the world premiere having been seen last summer in Los Angeles at the Echo Theatre, a performance for which Rupp was nominated for several awards. 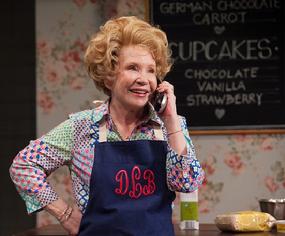 Rupp has a remarkable ability with characters who are not the common, ordinary folk. In this play she gets to be the sweetest, most loving bigot and her intent to be loving, supportive and, in turn, loved drives her character from start to finish. This actress has a softness that implies imminent shifts of belief but she maintains the backbone of the very sure, the very positive, the unswayable. Listening to her state plainly her position on same-sex relationships and their relationship to God and the world makes the case seem almost right. In Rupp’s voice, such statements have a cogency otherwise denied to most people. I do believe that she could read a political tract that works against anything I believe and Rupp could make it seem right and reasonable. This is a role that gives her that opportunity: convincing almost everyone that she knows how people ought to be. Nothing can shake her conviction. This is remarkable acting.

Playing opposite Rupp is the playwright’s husband, Morrison Keddie, a disembodied voice, the man in her mind who hosts the all-important television baking show on which Della intends to have her six weeks of fame. As the world around Della begins to crumb up, her inner deterioration is represented in her imagined conversations with Keddie’s character, George. We almost learn more about Della through George’s name-calling, blame-calling, shame-calling voice. Keddie is not among those whose bio you will find in the program, which is a shame, for this already well-known TV and film actor’s voice has a devastating effect on the heroine of the play, pushing her on, compelling her to a new awareness of those aspects of her life that could use a bit of well-sifted baking powder in order to rise to expectations.

There are three other people on stage with Rupp, and a fourth talked about to the point where you believe you’ve met her. Della’s husband, Tim, is played by Douglas Rees. Her goddaughter (sort of), Jen, is played by Virginia Vale and Jen’s fiancee is played by Nemuna Ceesay. Jen’s mother, to whom I alluded above, is five years dead and, though never seen or heard, is very much heard from as Jen and Della discuss her. 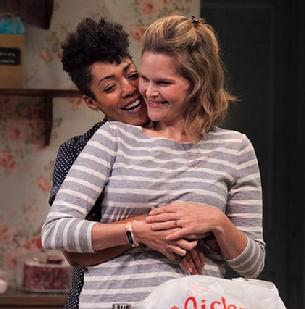 Vale gives Jen the sweet softness that this character certainly needs, but she also brings in some steel and some fire when required. She plays the young bride-to-be with raw emotions that are easily scraped and scabbed by those who love her too much. This is a very fine performance of a difficult role, a woman whose convictions about her life are as exact as Della’s recipes; and yet, with her own “cake batter” unproven, she is in constant jeopardy of falling flat, leaving little delectable in her wake. Jen goes back and forth as she plans the wedding she has dreamed about since childhood, a wedding that cannot possibly achieve all her wishes. As the six months progress from Scene One to the end of the play, Jen rides an emotional roller coaster which is not buoyed up at all by Della’s refusal to understand her and Macy, her girlfriend, intractable on the premise of fairness and being accepted. Vale takes us through her mental states and her changes beautifully. It is a graceful performance of a tricky character.

Macy is much more secure in her understanding and treatment of the world they live in, and Nemuna Ceesay is a constant delight as she tears down walls and barriers, exposing rust in the cakepan of life that Jen has always been comfortable in. She plays the harder, gruffer role, to whom you want to say, “Enough! Give it a rest!” She plays it so well that, when she undergoes her own metamorphosis, the change is as delicious as the wedding cake Jen has been dreaming about.

Douglas Rees gets to play in the two funniest scenes in the play: Della’s seduction and, later, one of his own. Their marriage is too comfortable without the passion that first inspired it. Della makes the first moves and then has the good grace to respond to one of the funniest visual set-ups I’ve seen. For voyeurs the lights may be extinguished too soon but, for the rest of us, the timing is just right for the scenes and for the play in which they are seen. Rees is the odd man out in this play by and about women and their worlds. He gives the play that bit of reality that it and Della need. 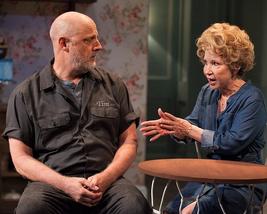 Director Jennifer Chambers has done a superb job with this play, giving it time to rise gently, punching down the dough when needed, icing it with fine touches especially toward the end. She has brought “The Cake” to life with its spices and its sweetness and its artificial ingredients that Della has told us must not be used. She must have worked closely with Brunstetter in the creation of the play, for it is very hard indeed to find a single aspect of it that doesn’t keep our appetite going for more.

Tim Mackabee’s set is professional and marvelous, both the bakery and two bedrooms. Tricia Barsamian’s costumes could not be better, right down to the monogram on Della’s apron. Matthew Richards’ lighting provides the perfect focus for the action of the play. Alexander Sovronsky’s music is, as usual, lovely, but it felt a bit intrusive at one or two moments. Much could be said about Trent Pcenicni’s wigs, but you should discover them for yourself.

The cake is the hit of the wedding party, naturally, and “The Cake” should be a hit all on its own. Rupp gives it its own reality with her looks, her voice, her reactions and her marvelous ability at making characters who shouldn’t be loveable into loveable women. I won’t need any dessert now for weeks.

The Cake bakes (at 350 degrees for 91 minutes) on the Barrington Stage Company’s St. Germain Stage, 36 Linden St., Pittsfield, Massachusetts, through Sunday, July 15. For information and tickets, see the Berkshire Edge calendar, go online to barringtonstageco.org or call the box office at (413) 236-8888.