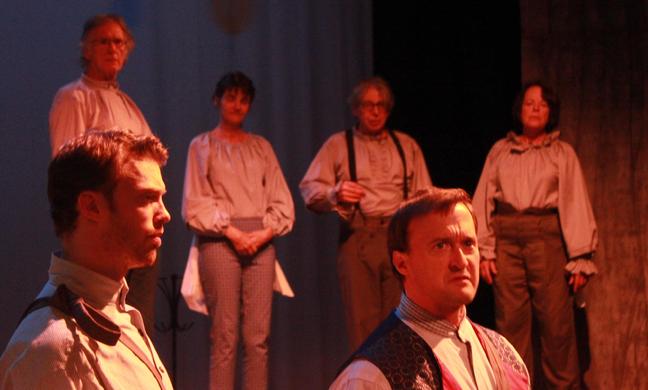 The Almost True and Truly Remarkable Adventures of Israel Potter
By Joe Bravaco and Larry Rosler
Based on the novel “Israel Potter: His Fifty Years in Exile” by Herman Melville and the memoirs of Israel R. Potter
Directed by Nathan Stith

In 1759, French philosopher and author Voltaire penned the novel “Candide,” characterized by its tone as well as by its erratic, fantastical and fast-moving plot as a picaresque novel with a story similar to that of more serious coming-of-age narratives. It parodies many adventure and romance clichés, the struggles of which are caricatured in a tone that is bitter and matter-of-fact. Still, the events discussed are often based on historical happenings. Voltaire ridicules religion, theologians, governments, armies, philosophies and philosophers. Nearly a century later, novelist Herman Melville used the existing story in the memoir of an American Revolutionary War soldier named Israel Potter as the source for his eighth novel written at Arrowhead, his home in Pittsfield, Massachusetts. 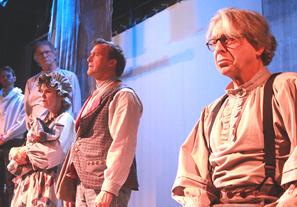 His book is also a picaresque, taking his hero on a long journey from his home in Berkshire County to Bunker Hill to the shores of Great Britain and beyond. In the course of the tale, he meets and interacts with such luminaries as Benjamin Franklin, King George III, John Paul Jones, Ethan Allen and a host of other characters who complicate Potter’s life and his quest to return home to Pittsfield, to his own Westphalia, the home country of Candide. Just like Candide, his quest is constantly continued through other calls on his time and attention including political, religious and romantic idylls. One of Melville’s most accessible works, easily readable and yet lush in its language, it has been turned into a play by Joe Bravaco and Larry Rosler and produced at Oldcastle Theatre Company in Bennington, Vermont, a mere stone’s throw from the place where Melville created it in 1855.

The plot, very episodic and covering 50 years, has been recreated in the form of a story-theater. Back in 1970, Paul Sills and a company of actors including Valerie Harper, Paul Sand, Melinda Dillon and Peter Bonerz practically invented the form and certainly capitalized on it, taking their collected fairy tales to Broadway for a successful run. In the show they played many characters in each story, narrated the tales and took the pages of books into a three-dimensional realm. A decade later the British brought Charles Dickens’ novel, “The Life and Adventures of Nicholas Nickleby,” to the stage in the same way. This year, it seems, Melville’s novel is getting its chance. Critical reaction to these stage works has always been mixed while audiences have enjoyed them overwhelmingly. From the reaction of the first performance by a professional company of “Israel Potter” in Bennington, the same may hold true.

Assuming that the script is actually as written by Joe Bravaco and Larry Rosler, director Nathan Stith hs slavishly followed the story-theater format. Actors telling a story as a sort of choral society but in period costume drop in and out of the narrative to portray specific characters for a scene, a moment, a while depending upon the dramatic necessity. There are six actors in this case—four men and two women (the women get to play men quite often)—and, once they assume a character, they are the only ones to play that character for the duration of the play. One actor, Josh Aaron McCabe, plays Israel Potter. In a play like this one, the actors rarely leave the stage except for a quick costume change, so it is McCabe’s difficult duty to age on stage as he grows from a young western Massachusetts farmer to an old man long away and forgotten in his neighborhood, crippled by injuries and long years of suffering. McCabe accomplishes this nicely: The transitions are subtle and the final effect superb.

Richard Howe plays Potter’s nemesis, Tichenor, and a host of other roles and he, too, in that primary part, ages suitably and even plays the younger man with ease. The Battle of Bunker Hill plays a major role in both Tichenor’s and Potter’s lives and their fortunes become intertwined in many ways including the romantic; and it is Potter who suffers the most, although we are left to wonder at Tichenor’s final days and whether the natural reaction of behaving badly is a comeuppance or a criminal getaway.

Gary Allan Poe takes on a great number of roles including Ethan Allen, a man whose need to boast is one of the most comic aspects of Poe’s collection of characters. Christine Decker, one of the most flexible actors in the company, shows us men of strength, men of need, women of age and wisdom, and women of a certain natural aptitude for slander. Frankly there is nothing she does that anyone else could ever do better. 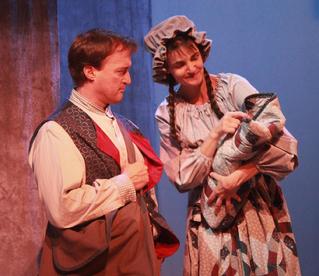 Two actors new to the Oldcastle community make strong impressions with their work. Robert St. Laurence is a boisterous, conceited, overwhelmingly boorish and self-serving John Paul Jones. For St. Laurence, the seaman is a showcase for accent and blather and boasting and benevolence never granted. His Jones is so much an over-the-top caricature that the humor in the writing is overwhelmed by the performance, but the performance is still so enjoyable that the man behind the egoist-character is well defined and memorable. Later in the play, he takes on the role of Potter’s adult son, helping his father to regain a connection with his birthplace in Berkshire County. This scene, the final chapter in the novel, has always touched me deeply and, as played by St. Laurence and especially McCabe, it was as deeply affecting as ever.

As Betty, the betrothed country lass of Israel Potter, Anne Undeland has the other most moving moment in the play, at the end of Act One when she implores him to return, to be her salvation from a fate she has no taste for. It is a brief moment but an especially effective one. She also plays Benjamin Franklin, Potter’s British wife, and so many Englishmen that her specular fluidity with accents and dialects in the English tongue are spectacular. Like Potter, we learn about Betty’s demise in a quick moment that hurts us as much as it does him. Not unlike Don Quixote, the quest that has motivated this American Candide — still an innocent in so many ways at the end of his adventures — is a futile one, bringing little satisfaction or reward.

Roy Hamlin’s set design works wonderfully with every inch of its three level risers in full and almost constant use. Ursula McCarty’s costumes are practical in a play where so many changes take place so often and so quickly. David V. Groupé’s lighting is moody and marvelous aiding and abetting Cory Wheat’s excellent projections.

Stith’s use of the stage and his manipulation of his actors is something of a staging nightmare, but he keeps the show moving and it all works well. Classic forms of live sound effects, a vista, add a touch of theatrical fun to the stage pictures he presents.

While I sincerely doubt that this will be my favorite play of the season, it is one I am glad I saw. With my own theatrical background, it was both a lively and invigorating experience to once again watch a show in this format: storytelling with acting. However, the picaresque — a concept that moves the story forward and from one place to another without transitions — is never going to be the most compelling form for my tastes. I love seeing this book transformed but it doesn’t develop characters the way a perfect play might and I missed that, even with our Voltairian innocent at the center. One touch of emotion every now and then would have helped, but McCabe is denied that possibility until the final sequence back home in the Berkshires. I got that, as I always do in this story, and I loved that.