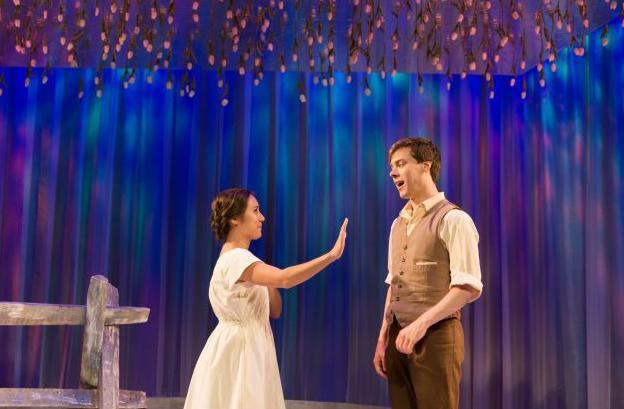 “Try not to let your heart fly out of your mouth.”

The Latin American concept of magical realism has moved north to Canada where Stephen Massicotte has written a glorious example of the form: “Mary’s Wedding.” In the production currently playing at the Chester Theatre, directed by Colette Robert, set designer Travis George has delivered a setting for the play that perfectly provides the two players and the audience with an environment that seems ideal for such a play. A gauze curtain upstage behind a delicately angled ramp, or series of ramps, places our focus on a rail fence section overloaded with beams while a single chair and a few props complete the picture. The entire scene is topped by dangling uprights that could be branches of a tree, or perhaps a sea of roses in bud held upside-down.

On this stagey set, two young people play out a story that they have played out before. It is a dream, the woman tells us up front, and it is a dream that contains secrets including an unheard phrase that compels her to dream this dream over and over. It is the eve of her wedding and it becomes clear quickly that this wedding the next day is not one that she completely relishes. There are circumstances that need completion before she can sign herself over to a new permanent world different from the one she dreams about.

Marielle Young plays Mary, a British girl newly arrived in Canada with her mother. She is captivated by a young neighborhood boy of whom her mother disapproves. Naturally this makes him even more attractive. Young is true to her surname in playing this role with all the earnestness of youth. She is refreshingly ingenuous. She is also completely natural. Every word she speaks sounds crafted and yet becomes genuine just because she says it. She creates the reality of the dream state through her every movement, every action, every verbalized thought. In the few moments of the play in which I was not thoroughly captured, Young still managed to never sound trite or even predictable when I knew what was coming.

As her romantic counterpart, Charlie, Steven Lee Johnson was the most open-faced, reality-borne human being. The unreal situation of this play became the permanent putty holding the parts together in his talented hands. He was strikingly honest and amazingly fresh in a situation that has come by me for years and years. The “dream-true” concept in the British/American classic novel, play and movie “Peter Ibbetson” by George DuMaurier comes to mind, in which the hero and heroine, separated by years and circumstances, meet and romance in their dreams, living a life they never led in their actual time on earth. Such a piece requires perfect playing to carry through its idea and, with Johnson as Young’s counterpart, this play manages to make every moment in its dream-state play as natural and actual.

Johnson’s acting has more to do with the success of this concept than anything, including the setting. He brings so much normalizing to the romanticism of the play. He makes the normal wonderful and the wonderful amazing. As he becomes more open to the reality he has lived through and the curious fate he endures on the eve of his beloved’s wedding, the play turns from its magical realism to a different futurist focus and the result is an overwhelming touch of emotional response from the audience to the circumstance of the play. Johnson and Young keep it real right through the conclusion and it is romantically enveloping.

Lara Dubin adds the magic of lighting to the stagework, and Elizabeth Pangburn’s very realistic and simple costumes correctly depict the two players. David Wiggall’s sound design work in conjunction with Dubin’s very special lighting effects give the play its inner and outer senses of fear and anxiety. Overall, the 89 minutes of this play never lose a bit of impact in this stellar production — its run in Chester is far too short for fans of the allegorical, romantic or magical drama.