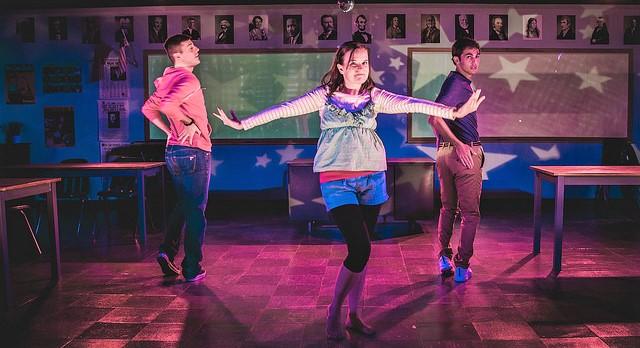 “The best part is being envied.”

Whenever three ingenuous high school students gather, there is likely to be magic. Sometimes the magic is trite or even dreary, sometimes it is clever and dynamic, sometimes sparks fly and fireworks you didn’t know were there are ignited. This is a premise as old as time. When the three kids in this play meet and merge their emotional turmoils, the result is sheer fun, illumination, and the kind of stuff that dreams really are made of. They don’t have to be friends in order to click. They just need to be open to possibility and this is a struggle for two of the protagonists in this play, at least at the start of things. Opening up is hard to do and, as one of them states late in the play, “secrets aren’t meant to be kept,” so secrets are the heart of this play, “Speech & Debate” by Stephen Karam, now on the St. Germain stage at Barrington Stage Company in Pittsfield, Massachusetts.

One of the funniest plays in years, it is also one of the most emotionally engaging pieces to come along in that same time period. Designed to take advantage of every technical possibility, Reid Thompson (sets), Burke Brown (lighting), Alex Basco Koch (projections) and Palmer Hefferan (sound), the resultant product is a perfect mixture of old school/new school/pro -school no-school theater. The production, including some delectable costumes designed by Nikki Delhoimme, is truly predominant in this show about communication skills and arts, about coming to terms with realities and about how talents abound in places where they are not instantly obvious.

Betsy Hogg plays the mover and shaker 16-year-old Diwata Jones, a girl determined to star in the movie of her own life no matter who she might have to kill to get the role. Diwata is amazingly unfit to be herself, try as she might, but she literally takes the bit in her teeth and runs with it, dragging the two unsuspecting boys in her wake. As Hogg plays her, she genuinely likes these guys but they principally serve as her back-up dancers, her companions on the road, and she is always the star. It is Diwata’s drive that moves the boat and not a gentle wind. Hogg is a delight in this role, making the teenager tremendously appealing and revolting at the same time. She is truly the kid you avoided in high school. She is voluptuously the draw at an event you weren’t going to go to under any circumstances.

Ben Getz plays the sane-and-sober repressed intellectual whose family are convinced he can be the son they have asked him to be in spite of all the evidence to the contrary. Getz plays the shell-bound kid with a reluctance to come out to himself and be himself using remarkable skill at holding back what is almost obvious. “If I was hypocritical, it would be irrelevant,” Solomon says at one point, finding one more excuse to remain on the outer limits of the growing trio relationship. Getz plays with structure wonderfully in this play. He takes a boy growing bitterly critical of his world and moves him through all the necessary transitions to emerge a full-fledged individual. It is wonderful work from the only non-union actor in this play. This is a young actor with a future and I hope we will see him on our local stages again.

The “out” character–the most honest with and about himself–is Howie, played by Austin Davidson. Howie is self-abusive to a small degree and self-effacing to a larger one. He knows that what doesn’t make him comfortable is what should be avoided but he lets himself be drawn by Diwata into a club that puts him center stage every once in a while, an unwanted position for him to take. In his life, Howie has put himself in dangerous positions that, revealed, could make things dangerous, difficult and detrimental to his present and his future. When Davidson allows his character to become a physical part of the plot, he suddenly turns into a compelling human being whose ethos sings out truths. As with the interpretive work of his two compatriots, the performance is fully realized and holds our attention easily.

Edelen McWilliams plays a schoolteacher compelled to maintain a dignity dependent on curriculum and a reporter whose inquisitiveness is disruptive and insultingly, disputably intrusive and self-serving. She plays both roles with an accurate eye toward the reality she has been given by Karam’s play.

Solomon would like to be ordinary yet superior to his acquaintances. Howie would like to be something he’s not but he doesn’t know what that could be as yet. Diwata wants to be that coveted star who gives herself when she wants to and holds herself in reserve as needed. Jessica Holt, the director, has given her actors what they need to succeed in their roles, the positive and negative responses to what they have brought to the picture. She uses all the elements allotted her in this production. The acting and interacting is natural and feels right. The technical enhancements really do enrich rather than dominate and draw your attention from the people in the play. Holt’s work here is excellent and the play profits from her insights and her talent.

After a week of plays with alternative sexual orientations, of odd relationships and political parody, this play wraps it all up with laughter and a gentle tear of remembrance about those formative years when so much was possible and so little explained. This is a well-written play performed with taste and with a timelessness that is wonderful. The songs by Stephen Karam that Diwata and company perform are as silly yet appropriate as can be. It all combines into one of the best shows in the area this summer, and I feel sure that will still be the case two months from now when it’s all winding down. This is one I would definitely see a second time.

Speech & Debate plays on the St. Germain Stage at Barrington Stage Company’s Lee and Sydelle Blatt Center for the Arts, 36 Linden St., Pittsfield, Massachusetts, through Saturday, July 29. For information and tickets, see the Berkshire Edge calendar, call the box office at (413) 236-8888 or go online to www.barringtonstageco.org.