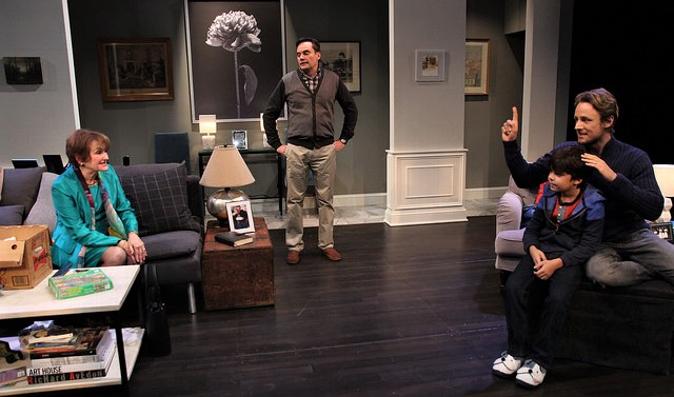 Eloy Garcia
Annette Miller as Katherine, Bill Mootos as Cal, Hayden Hoffman as Bud and David Gow as Will in the Shakespeare & Company production of 'Mothers and Sons.'

Mothers and Sons
By Terrence McNally
Directed by James Warwick 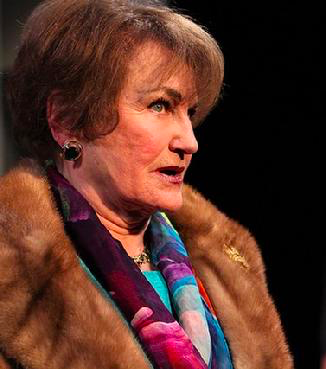 Annette Miller as Katherine in the Shakespeare & Company production of ‘Mothers and Sons.’ Photo: Eloy Garcia

Here’s a hint for you: Unless you’re totally prepared to wipe away the smirks, smiles, snorts and snottiness, do not just drop on in your son’s ex-lover; you will have to pay the piper. You will have to listen and take in what he tells you; you will have to suffer the consequences of your actions — or your inactions. It may have a humorous side to it, but you will still have the bill to pay at the end of your impromptu meal of mortification. This is the discovery made by Katherine Girard when she pays a visit, nearly 20 years after her son has passed away — a victim of AIDS — to his former partner, who is now married and a father. He is married to a man much younger than himself, and they co-parent the child they worked to conceive. Katherine Girard has a great deal to learn and only a limited amount of time to spend learning it all. Hands down, this is the densest 91 minutes you will ever spend in a theater, and every minute is precious and special and important and entertaining.

Directed by James Warwick in his Shakespeare & Company debut, this play hits the buttons, reveals the winning numbers and suffers the lotto losses we all suffer. There are so many levels to their stories, to their histories, that she and Cal Porter, her son’s “ex,” never have nothing to say to one another. A lot of it is fun, much of it is unpleasant and all of it is relevant. It’s that kind of Terrence McNally play, and Warwick makes the most of every opportunity to let a zinger force its sting and of every tittle to tickle the funny bone.

The extraordinary Annette Miller plays the lady from Dallas who drops in without warning. While she is never intentionally rude, she has a rudeness gene in her system that allows her to naturally insult people. She does it so naturally and so easily that it is clear that the phrase “nothing personal” is not in her vocabulary, for every accusation, every inference, every conceptual insult is there waiting to be used to keep the conversation going in her direction. She is this way to Cal Porter, her son’s ex to whom she paid her greatest insult at her son’s memorial in Central Park, New York, when she snubbed Cal, wouldn’t hug him, or embrace him or acknowledge that her son’s loss was a hurt felt deeply by the man who loved him and who saw him through the toughest times imaginable.

Miller has a manner of movement and speech that makes her character impervious to reality while keeping her sincerely grounded in the realest of situations. She confronts without looking at someone directly and, the next minute, she enters a staring match that she is determined to win. She can refuse a simple favor by implying vocally that the favor is tainted. She can be magnanimous with disdain lurking underneath. Annette Miller can simultaneously play many levels of reaction and make them all hit their targets at the same moment. The role of Katherine is well on its way to replacing Golda Meier as one of her greatest achievements. It is as though she was born to play this role, to act in this play, to immortalize the meanest mother in Dallas, Texas, on a visit to New York City. 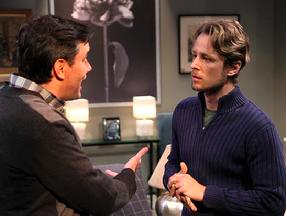 Bill Mootos as Cal and David Gow as Will in the Shakespeare & Company production of ‘Mothers and Sons.’ Photo: Eloy Garcia

She lives in a world where only her dreams may be realized, and her dreams are nightmares about the past and about her losses. She has already achieved the loss of respect, love, sexual satisfaction, human interaction and the lust for life that makes people span a century with egoistic glory. She is a woman alone; no, not alone: She is woman singular in every meaning of that word. And yet, as the play moves along, we want to love her, to reach out to her, to allow her the sufferance she desires. If a little child can lead the way, then that is where this play takes us, though not closer to her lost son, Andre — never to him, though it’s what she wants.

Instead, it is toward another man’s child, Bud Ogden-Porter, the natural son of Cal Porter and his husband, Will Ogden. The child, played on opening night by Evan Miller, provides the delicious impetus toward outward expression in Katherine’s New York experience. Evan Miller provided pathos, longing, cookies and milk, in that order, and made the most of every moment he had to play.

Similarly, though with greater emotional scope, Cal’s husband, Will Ogden, is played by David Gow, making his Company debut in this role. Gow never gives a false moment in this part, never lets us find him anything less than real and sincere. As the younger man in this relationship, he has the difficult task of providing the almost idealized relationship that Cal missed with Katherine’s son, Andre. He is, in fact, the presence that will most likely haunt Katherine’s nightmares in spite of her deep desire to have never known that a “Cal” existed for her son. Here is a woman whose personal needs reflect the larger scope of personal greed. With Will in front of her, she cannot be nice, not be pleasant or agreeable in any way. Instead, his presence — and a well-played annoyance that presence is in Gow’s performance — gives her license to be as mean-spirited to a kindly stranger as she can possibly be to anyone. Gow’s greatest strength in this role is his constant graciousness to the woman who hates his very existence. Gow inspires hate from her, love from his son and admiration from his partner. The script calls for it and Gow delivers in every line and every move. 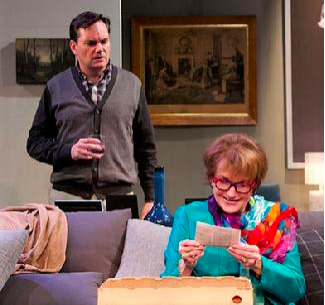 Bill Mootos as Cal and Annette Miller as Katherine in the Shakespeare & Company production of ‘Mothers and Sons.’ Photo: Eloy Garcia

As powerful a performance as Gow gives, it is still the interplay between Katherine and Cal that makes this play work. Bill Mootos, in yet another Company premiere performance, brings Cal so much to life that it is hard to imagine this actor has an existence outside the walls of the Bernstein Theatre. His feelings seem to float around him, possessing him and protecting him as he tries to be nice to the meanest person he has ever met. He has the kind of voice that is a pleasure to listen to and he takes up physical space that seems to belong to him rather than just be the place where he stands. When he talks about Katherine’s son, there is a pathos that belongs exclusively to him that no one else can ever touch. When he talks about Will and their son, it is as though a bubble has been born to float and elevate those moments. I don’t know how he does it, but he enlarges reality into a super-reality.

Dealing with what Katherine brings to him after 20 years of silence, Mootos’ Cal is a man whose island is invaded by a dark force; with the luck of the day, he manages to stave off the invasion through his personal strengths that waver but never give in, that suffer but never lose sight. I have seen three men perform this role and Mootos is the finest yet. He made me cry. This Katherine, Annette Miller, made me cry. McNally’s play touches memories and emotions that made me cry.

Luckily, it is with some joy that I cried for these people and with thanks for the way the play floats its antagonists in different yet parallel directions. A lot of the credit for this goes to the director, James Warwick, and a lot goes to his actors. Technically, the play is well designed and solid, its set by Patrick Brennan deeper than any I have seen in this space before, Stella Schwartz’s costumes perfect illustrations of the people who wear them. The only thing I missed was the sense of this room before and after sunset, the light shift almost causing a different level of intimacy as the play progresses. But that’s a small quibble about something almost perfect and certainly remarkable.

“Mothers and Sons” has become my favorite McNally play. It is not his usual poignant-but-comic work; this time, he is deadly serious and he has the perfect quartet of players to make his points. It is not to be missed.

Mothers and Sons plays on the Elayne P. Bernstein Theatre stage at Shakespeare & Company, 70 Kemble St., Lenox, Massachusetts, through Sunday, Sept. 9. For information and tickets, see the Berkshire Edge calendar, go online to shakespeare.org or call the box office at (413) 637-3353.