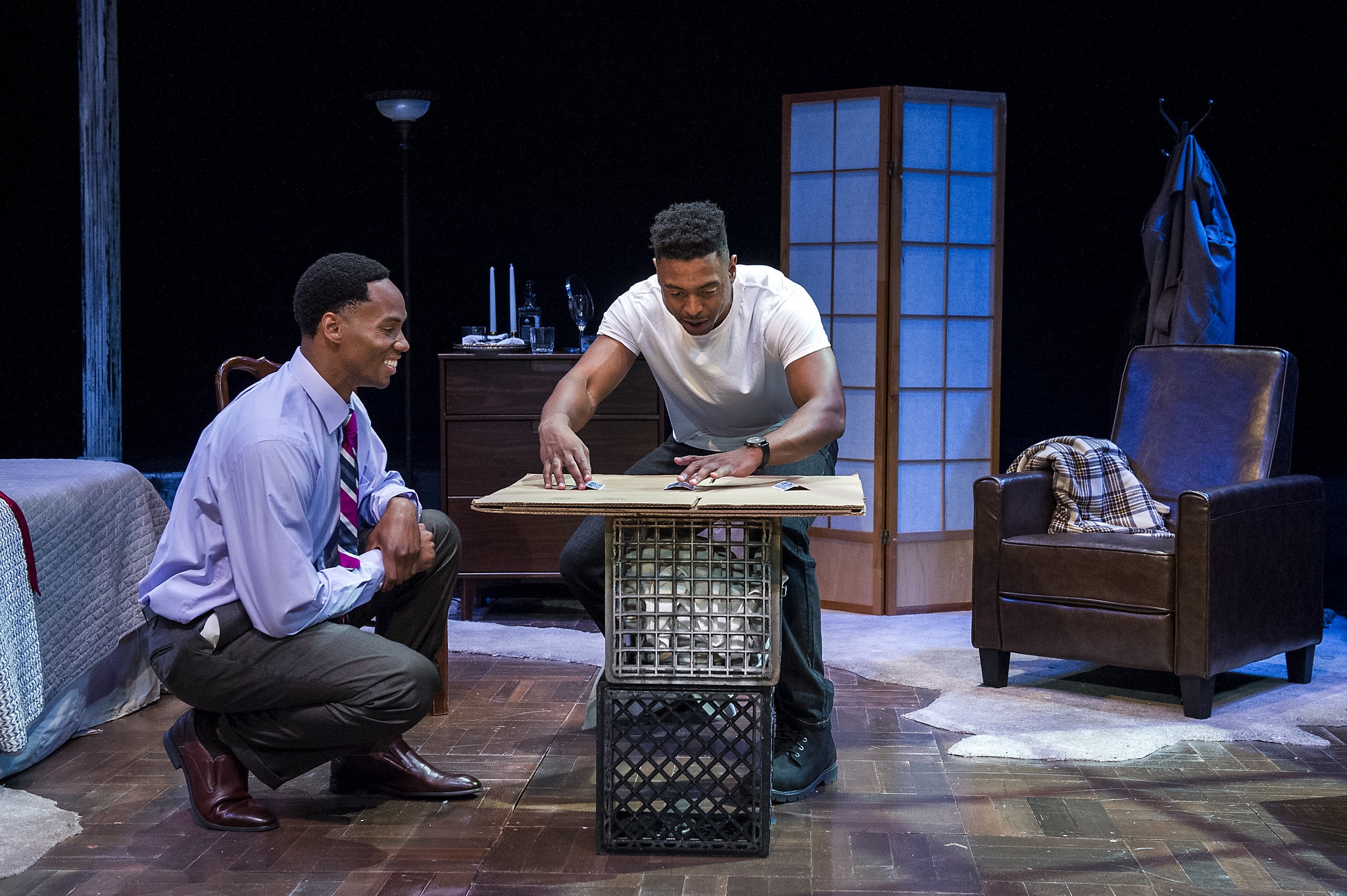 “It’s a long time from Friday to Friday.”

This is just what Lincoln needs to hear from Booth when he comes home from work with his week’s pay, which he hands to his brother to divide into usable parcels. Lincoln works as a “whiteface” Abraham Lincoln interpreter at a sideshow type of carnival. It’s an ironic job because Lincoln and Booth are men of color living in an inner city SRO (single-room occupancy apartment) practically on sufferance. It is Booth’s home, which he has chosen to share with his older brother, who is the only breadwinner. They love and despise each other and sometimes they can’t tell which they feel.

The simplicity of the story at the heart of Suzan-Lori Parks’ Pulitzer Prize-winning play “Topdog/Underdog,” now onstage at the Tina Packer Playhouse at Shakespeare & Company in Lenox, Massachusetts, is this: Two brothers discover reality and share their revelations in the best ways possible. I call it simplicity, but you might call it by some other name, one like “OhmiGod.” Author Parks pours these revelations out of her two characters with the regularity and speed of raindrops in a storm.

Linc has been a street hustler with the game of three-card monte and Booth wants to become what his brother has been. Deserted by their parents when Linc was 16 and Booth 11, the two boys have been everything to each other, but now, in their 20s, they have grown apart. Linc’s wife has left him and Booth’s girlfriend abuses his trust. Once again each brother is dependent on the other. This time it isn’t a comfortable match-up.

Sibling rivalry is the principal emotion in this play. Lincoln, an inspired Bryce Michael Wood, is as good a brother as anyone could be in the awkward situation in which he has been placed by fate. He is helpful, proud of himself for working to better his situation. He genuinely loves the boy he raised when it was necessary for him to do so while fighting off the authorities to maintain their own homelife. Wood gives this plausibility in memories that come out of him reminiscing over old photos. His wonderful voice sings praises of his baby brother as he reminds him of the debt that is owed for keeping Booth out of the hands of juvenile services. While his own life has now been reduced to living in a recliner, he still glories in their shared existence.

Wood is wonderful in this role. Even when anger and disrespect replace everything else, he still shows a base of affection that cannot be denied. Parks’ play takes him through so many human emotions in such rapid succession that it is a wonder he never mixes them up.

Deaon Griffin-Pressley beautifully portrays the youthful exuberance for Booth’s newfound concept of a lifestyle to come. This is to replicate his older brother’s street existence with easy money flowing into his pockets through the con game. He even wants to change his name to Three-Card. It is this actor’s sweetly youthful self-enjoyment that produces the laughs in the first and second acts, and it is also his understanding of his character’s misunderstanding of life choices that turns this amusing work about depression and destitution into a tragedy.

Griffin-Pressley has played the light and romantic Shakespearean roles for this company just often enough to know how to endear his characters to an audience. He uses that skill perfectly here and we find ourselves pulling for him nearly to the end, even when he displays Booth’s irrational side. It is his final emotional shift that brings the play to its unavoidable if unanticipated climax.

Director Regge Life has worked carefully to expose the major and the minor shifts in these two brothers’ relationship. Their difficult association, marred by truths that are revealed and aided by history exposed, keeps the play compelling. Life has literally brought life to the play’s sometimes wordy scenes, keeping them open to experience-added rhetoric. My only complaint, and it is a minor one, is that the set itself, designed by Christina Todesco, removes some of the impetus for the dialogues. I have seen SROs and this one is spacious, almost elegantly large. The play calls for a sense of confinement and that is missing in the design here. Costumes by Stella Schwartz are excellent and the lighting by Matthew Miller is fine, if a bit broad (that is due, I think, to the size of the room again). Brendan Doyle’s sound design aids the play emotionally. Stage manager Hope Rose Kelly has a lot of things to control in this play and she delivers a clean show.

The trio of Griffin-Pressley, Wood and Life have done a great job pulling this play together. The two actors are believable in their onstage relationship and the final moment in their bows brought home the special sense of family that the theater produces in its participants. I am sure every member of the audience felt and understood how essential that relationship must be and wanted to be a part of it, too. This is excellent theater.

Topdog/Underdog plays in the Tina Packer Playhouse at Shakespeare & Company, 70 Kemble St., Lenox, Massachusetts, through Sunday, Sept. 8. For information and tickets, see the Berkshire Edge calendar, call the box office at (413) 637-3353 or go to shakespeare.org.