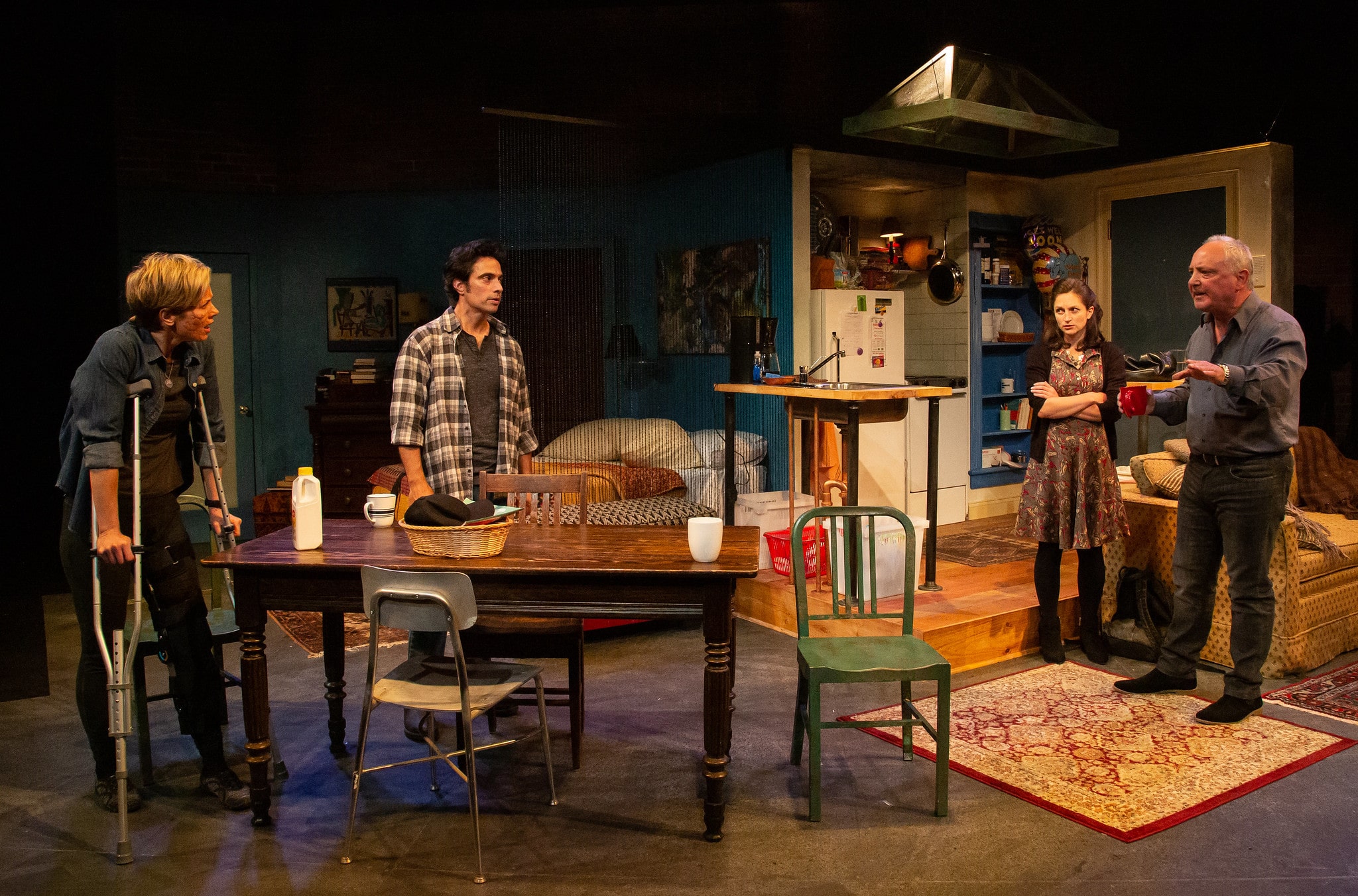 “I live off the suffering of strangers.”

This is just one theme of Donald Margulies’ play “Time Stands Still,” now on stage in a brilliant production at Shakespeare & Company in Lenox, Massachusetts. Sarah, a photojournalist, and James, a writer, live through their work — together as a team and solo in their fields — and also live together, lovers for eight difficult years, difficult because of their work in the Middle East and other war-torn locales. They principally work for a news magazine published by their friend Richard who is also Sarah’s ex-lover. Sarah has been severely injured and has just returned home to New York where James, recovering from shellshock trauma, waits for her. Conscious of his own difficulties, he is oversolicitous when Sarah arrives back in the States. Everything that happens between them thereafter is based on two simple things: love and work, constant rivals for their attention. While their time together may progress through phases, their history keeps them locked into time slots that never change, never leave them, never move forward.

The cast onstage in Lenox is incredible, each one perfect in character look, sound and feel. There is a seamlessness in their playing that gives a definite impression that we aren’t watching actors, we are witnessing real people in crisis who just happen to be exposed to our view through some telepathic miracle. This is unusual, to say the least, and it pulls out of us a sympathy that might not otherwise exist. Some of this feeling is the actors, naturally, but much of the credit must be shared between the playwright and the director, Nicole Ricciardi. Everything we watch onstage is so believable with dialogue that is perfect for the people of the play. Clothing, movement, visible connections and altercations happen generically. Nothing is forced or wrong about this performance; not one false note can be found, no “acting” noticed. There are four people in an apartment and somehow the fourth wall has just dissolved leaving them exposed to their neighbors, who cannot help eavesdropping on all levels.

Tamara Hickey plays Sarah Goodwin, the photojournalist whose return from the edge of death is truly a miracle. Though she seems changed by the experience, in reality, she is the same woman she has been, only more noticeably so. The love she feels for her longtime partner is paired with her frustrations with their relationship. She makes time stand still through her work with her cameras. She also attempts to do the same with her lover. She is not a great fan of change; her family is kept at bay as it always has been, for example. Her two-week coma, another instance of time redacted, is not time lost for her. It is just one more example of a way to view life.

Hickey is remarkable in this role. She expresses love through a chilled exterior. She shows us her eagerness to return to work through an obstinate singularity. She gives us a view of a mind that can accept new concepts simply by overlooking them and their inherent difficulties. When angry, she is impassive to reason; when loving and romantic, she is textual. There is a peculiar attraction to her that we see and hear but cannot acknowledge. Her belief that she cannot change things but only record them is the key to her psyche, but that key has no door to unlock. Sarah is accurately and definitively portrayed by Hickey, who has not given a better performance with this company in any other play. She deserves every kudo ever sent her way for this performance.

Watching actors mature is a dangerous thing. David Joseph has impressed in so many plays and musicals, in so many styles and so many phases, that watching him play James “Jamey” Dodd at this stage in his career is almost revelatory. He plays a writer whose journalism has touched on many subjects but whose passion is the suffering of humanity around the world due to the cruelty of their fellow man. Suffering from the near loss of his own sanity after becoming a victim of all this human aggression and then recovering the much-altered love of his life after her near-death experience has shoved him brutally into a new form of existence. His needs and goals have changed. His future holds no bouquet of roses. He is not the man he was and his judgment has been rendered almost useless.

Joseph plays all of these personality changes as though we already know who and how he was. There are no “accidental” glimpses of the earlier Jamey. We get him in the here and the now, with no snapshot to refer to for our elucidation. Joseph allows Sarah and their friend Richard to paint the other view of his character, giving them no assistance. Instead he is caught in his own here-and-now and he plays with a steadiness that is just remarkable. In an early scene, Jamey says to Sarah, “Babe, you’re the best,” and it is clear from her physical reaction that this is not the man she has known. Joseph acts with the correct amount of realism, just the perfect amount.

Aiding and abetting the two leads are Mark Zeisler and Caroline Calkins. Zeisler plays Richard Ehrlich, the twosome’s best friend and publisher. Calkins plays his current girlfriend, Mandy Bloom. This Mandy is irrepressibly cute and dynamically cloying. That we come to like her, as do Sarah and Jamey, is a miracle of the skills Calkins uses to change our negative reaction to a positive one. This is a very talented actress at work and we rejoice in her personality infusion of good humor into a somber story.

Zeisler is wonderful, alternately charming and demanding, occasionally bemused and eventually the friend a friend-in-need needs. As he pushes, pulls and cajoles, he provides the alterations of mood this play requires. Basically I know that these changes are there in the writing, but as projected in Zeisler’s very strong performance, they exist for real and not just on paper. His character drives much of the action experienced by Jamey and Sarah, and Zeisler’s Richard makes it all very honest and real.

Director Nicole Ricciardi keeps everything totally real. Hickey, for example, falls several times and the honesty in each accident hurts us as much as it does Sarah. Joseph’s angry explosions emerge naturally and their consequences are honest under her supervision. Ricciardi keeps it all as real as real can be.

She is aided by the excellent design team, who have done the same: set designer John McDermott; costume designer Charlotte Palmer-Lane; lighting designer James W. Bilnoski; and sound designer Amy Altadonna. This is one play it doesn’t pay to miss; if you love theater, DON’T.