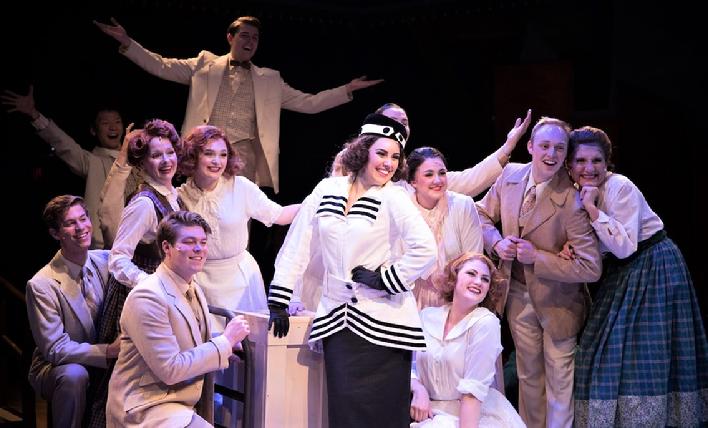 I am a real sucker for “Funny Girl,” currently on stage at the Mac-Haydn Theatre in Chatham, New York. I saw Barbra Streisand in it 11 times during its Broadway run, and I also saw her replacement, Mimi Hines, on her opening and closing nights of the show, which ran for 1,348 performances from 1964–67. Streisand left a permanent impression on my mind. I can see her face, hands and arched back, and hear her voice whenever the band strikes up a tune from the show. I think I’ve watched the film version with her repeating the role of Fanny Brice at least two dozen times. It’s hard to get her out of the picture when it comes to this show and this role, the part that made her a superstar.

I didn’t see the one performance benefit revival in 2002 which featured 15 different stars as Fanny including LaChanze, Whoopi Goldberg, Kristen Chenowith and Bebe Neuwirth. I wish I had for one reason: Kaye Ballard played Mrs. Strakosh, the neighbor woman who likes to put down Fanny for being unattractive, untalented and unnecessary. The show was originally written for Kaye Ballard to play Fanny back in 1960, then revised as a vehicle for Mary Martin and finally reconceived for Streisand, who had just made a major hit in the minor role of Miss Marmelstein in “I Can Get It For You Wholesale.”

The role at the Mac-Haydn is taken by Lauren Palmieri, an actress who, I am told, is prettier than she appears to be in this role. She pulls off the “plain Jane” aspect of Fanny very nicely without making odd faces or using quirky accents most of the time. In fact, under Sebastiani Romagnolo’s direction, she plays the part convincingly as a lovesick, stagestruck maturing young woman who really wants to escape her past while still embracing it. This gives a poignancy to the part that might not otherwise be there as we watch a dynamo create a career through the dynamics of the songs and the script. There are moments, I must confess, when I wished she would shape her lines a bit less realistically and give the play back some of its ethnic humor — mostly written in the tone of the lines rather than the language itself — and embrace the uniqueness of the Brice persona. But I had to suspend my understanding of what Fanny Brice was and who she was as created by Streisand and reconceived by Hines. I had to give the girl a break and let her play her Fanny. She was very good at it, particularly in the second act, when I found myself believing her every word, her every gesture.

In Act Two, Fanny has three overwhelmingly memorable moments, each with its own song. “Private Schwartz from Rockaway” is a comic delight in the Brice style. In this number, Palmieri embodies the classic Brice and pulls it off remarkably well. In the bluesy ballad “Who Are You Now?”, she lets the girl inside the woman come forward and express all the angst that a difficult relationship inspires. Here she moved me beautifully and soulfully. For “The Music That Makes Me Dance” — a stand-in song for the classic Brice rendition of the French song “My Man” or “Mon Homme” — she has been directed to play the piece as a radio rendition, which takes away a bit of its poignancy but allowed this actress the opportunity to show Brice as a consummate professional who can use her work to inform her life without revealing its realities to an audience. I thought that, in all three cases, Palmieri was as good as it gets in this role and I was overjoyed to watch and listen to her work.

Palmieri is surrounded by an excellent company of players including Judith Wyatt as her mother, Julie Galorenzo as Mrs. Strakosh, Meg Dooley as Mrs. O’Malley, Brian Wagner as Florenz Ziegfeld and Nathaniel Dolquist as Tom Keeney. Shannon Cunningham is superb as Emma, Fanny’s maid. Best of all the supporting players, though, is Colin Pritchard as Eddie Ryan, Fanny’s unwilling and unwitting aide-de-camp in plotting her career course.

It is Pritchard whose performance sets the cynical tone of the show, from his first appearance to his last one. He is hard-won to Fanny’s side and then never leaves her, defending her to the last and failing to keep his attitude about her husband a secret. Eddie is usually played with a softer sensibility, and I liked Pritchard’s take on the part very much. He kept in perspective our view of Nick Arnstein, who commands a major place in Fanny’s heart and mind, even when it’s clear he shouldn’t be allowed within 50 feet of her.

The Mac-Haydn company dance their feet off in this show and they sing their hearts out most of the time, although the chorus number “Henry Street” was somewhat disappointing, being less joyous and spirited than I am used to hearing it. Perhaps that was due to the oddness of the orchestrations. Not since the days of the old Kurweil synthesizer has this theater’s orchestra pit sounded so thin and wan with even the “Cornet Man” horn giving out much less volume than is needed in such a number. Hopefully, this can be corrected before the run continues.

The role of Fanny’s ardent suitor, husband and lover Nick Arnstein is taken by Chris Cherin, who was unconvincing in the first act, then wonderful in the second act. Like Palmieri who also improved amazingly in her character in the second half, Cherin seemed to be almost too small for his costumes, almost too slight for his character. But from 9:20 in the evening until the very end, he proved to be dynamic, attractive, romantic, maddening and delicious in the part of the gambler-turned-accidental-crook. In Scene 4 of this act, he plays with absolute conviction as he learns of Fanny’s lies when she tries to help him and it is in this scene that the character of Nick inspires Fanny’s blues ballad. The two of them were truly at their best in these moments and totally won me over. Their comic seduction duet, one of my favorite show lyrics of all time, “You Are Woman, I Am Man,” worked very well and seemed to set up what would come in Act Two.

Romagnolo’s choreography was stronger than his direction of his characters, but this outing proves that one person handling both aspects is both possible and yet overwhelmingly difficult — so much of the show is so very good and yet the first act seems underrealized. Jimm Halliday has provided some great costumes, although a few of the dresses and Nick’s cape felt unfinished somehow. Erin Kiernan’s set design was complex and worked perfectly. Andrew Gmoser’s lighting design was good but not his best. Kira Williams’ wigs helped to define the periods of the play perfectly.

“Funny Girl” is a show you won’t see often. It’s a hard show to cast. A production many years ago at Barrington Stage Company failed to satisfy and this one also has its problems. While I don’t think the answer is 15 Fannys on stage, I do think that the key here is finding the Kaye Ballard or the Barbra Streisand — neither of which is easy or even really possible, I imagine. Lacking those strong women, a performer such as Palmieri is highly acceptable, especially when she does so much good work in the role. One thing to remember: This show has one of the finest scores of songs in the lexicon of American musicals. You will know more of them than you realize. You will find this edition a very good way to re-introduce yourself to this challenging but rewarding piece of American musical theatre.

Funny Girl plays through Sunday, June 17, at the MacHaydn Theatre, 1925 Route 203, Chatham, New York. For information and tickets, see the Berkshire Edge calendar, call the box office at (518) 392-9292 or go online to www.machaydntheatre.org.