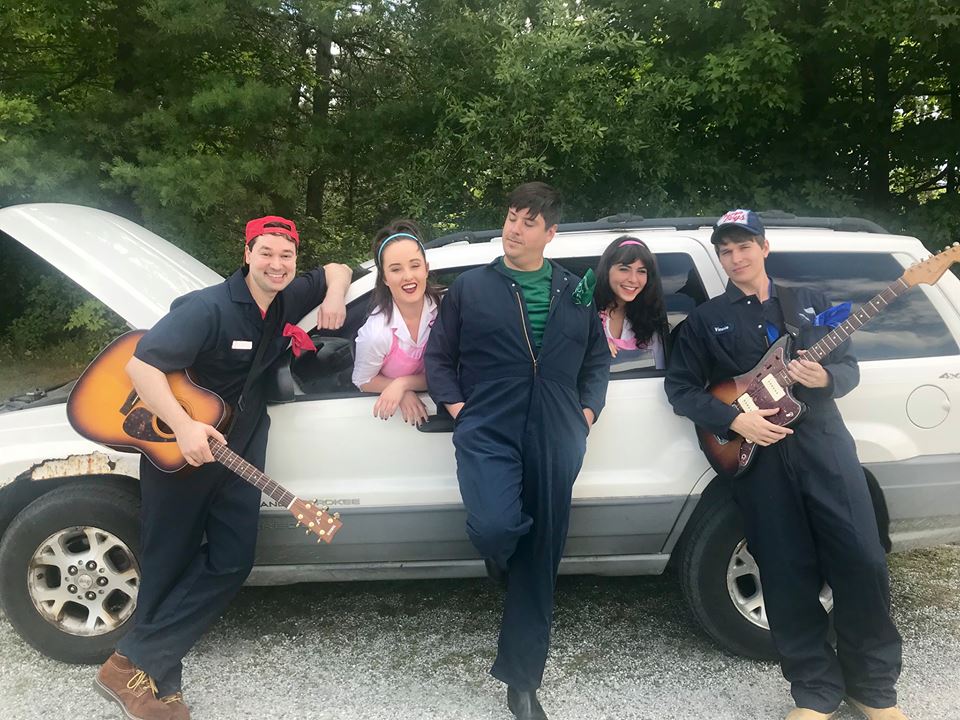 This 1981 off-Broadway show played for 573 performances on Broadway from 1982–83 and was nominated for a Tony Award for Best Musical. It was a quirky, curious, country music non-extravaganza performed by the same people who wrote the material and its odd charms never wavered from production to production. Strangely timeless, it is now appearing at the Theater Barn in New Lebanon, New York, with an attractive young company playing the Pump Boys who work at the Highway 57 gas station and the Dinettes from the Double Cupp Diner located somewhere between Frog Level and Smyrna, North Carolina. There is no plot to speak of. Jim seems to have a yen for Rhetta and Prudie seems to covet time alone with Jackson while L.M. (Jim’s older brother) dreams about his hour or two with Dolly Parton and Eddie plays bass. At one point in the second act, four of them go on vacation to Florida in Uncle Bob’s Winnebago but come home not much altered and keep on singing about their lives, separate and apart. There is not much to think about but, boy, is there a lot of fun along the way!

The Theater Barn cast is downright excellent. The almost 90-minute musical (including the intermission) is a downright charmer and, even if you don’t like country music, the show’s tuneful expressions of love, loneliness and economic frustration just capture your imagination and your heart. Jim sings of his “Mamaw” and breaks your soul in two. Rhetta instructs him to “Be Good or Be Gone” and he tries to comply with her wishes. Jackson mourns the loss of a woman he never knew named “Mona” while the two Dinettes regret their lack of youthful connection as they sing “Sister.” The show is filled with moments of revelation and things to contemplate that may have a relationship to aspects of your own life.

Patrick Scholl is a very handsome Jackson and he plays lead guitar. He is fun to watch as the youthful man who will always seem young no matter what happens to him. Scholl sings and dances nicely and has a look of being flummoxed whenever Prudie approaches him. Alexa Renee gives a feisty performance as Prudie Cupp. She is a dynamo singing and dancing.

Michael Santora makes Jim into a leading character in a show with no real leading characters. He has a strong personality that shines out of him. He sings really nicely and plays the flirt with aplomb. As Rhetta Cupp, Alexandra Foley gets the one genuine blues moment in the show as well as the one really aggressive come-on solo, and and she handles it professionally with a beautiful manner of attack.

Oliver R. Townsend plays the piano solo with great style that elicited some applause and sings his songs with a strong, sensitive voice. He is a fine L.M. in this production. Eddie, played by Adam Peterson, principally stands back and gives his bass guitar all of his attention. He plays extremely well, sometimes dominating the sound.

This fine company has been directed by Phillip Fazio who also choreographed all but one number in the show. There is an effortless, natural sense to his work here and the show clearly profits by it. Michael Santora choreographed the first act finale, “Drinkin’ Shoes,” with a major solo for himself. It’s a fun experience.

This has been one of my favorite little shows for 36 years and this production has only enhanced it in my mind. Go see it. I can’t be any clearer than that.