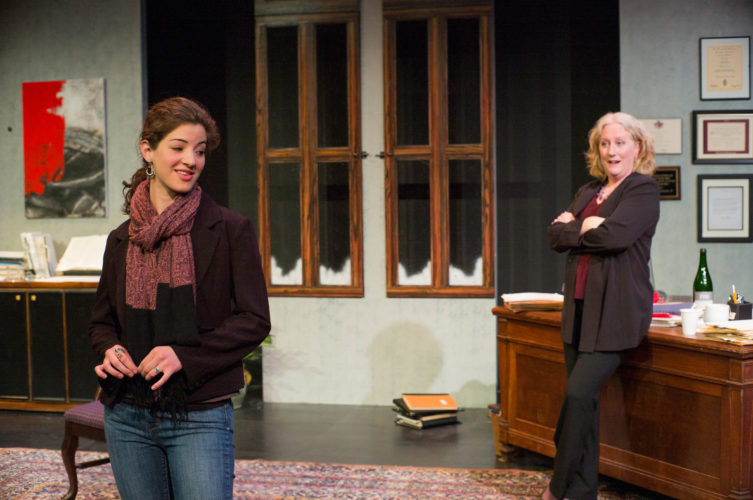 Lenox — Kenneth Tynan, the British literary scholar whose reviews in the New Yorker set a high bar for theatrical criticism, identified the following ingredients of great acting: a “powerful magnetism,” coupled with “complete physical relaxation, commanding eyes visible at the back of a gallery, superb timing which includes the capacity to make verse swinging, chutzpah . . .and the ability to communicate a sense of danger.”

Sarah Treem’s gripping play, “The How and The Why,” running in the Elayne B. Bernstein Theatre at Shakespeare & Company until July 26, begins with a confrontation between two women. Rachel, a graduate student in evolutionary biology, played by Bridget Saracino, arrives in the office of Zelda, played by Tod Randolph, the distinguished president of the scientific association that has rejected her presentation to its annual conference.

“Why?” she asks, in a stunningly fraught and portentous scene in which every glance and each conversational gambit offered by Zelda to make Rachel comfortable or to explain her society’s arcane selection process is rejected with a feminist proclamation or threat to leave.

A powerful magnetism radiates from both sides here – these are truly gifted actresses — but it’s bipolar, repelling as well as attracting in a blaze of fascinating fits and starts. Is it because Rachel’s proposed theory of female reproductive physiology might threaten the broad scientific acceptance of Zelda’s “grandmother hypothesis,” which stipulates and offers a mountain of data to prove an evolutionary advantage to menopause in pre-historic communities? Is it because no one in the field previously has taken it back a step, as she claims to have done, examining the female reproductive cycle in light of newer knowledge in immunology and the evolutionary advantage of protecting the uterus from the toxic effects of certain poisonous sperm?

Or is it because, at the very beginning of the play, each woman realizes that there’s something more going on in these questions and this relationship, having to do with their positions in their respective arcs of life, love, fertility, loyalty, and not least, betrayal and abandonment.

Lest the experience be spoiled, I’ll hold back further pertinent details of the story, except to say that in the powerful thrust of their stories, they all emerge. In an enthralling conversation that effortlessly brings in delightful and informative pearls of wisdom from biology, gender studies, medicine, and anthropology, the tension between the women amplifies to a nearly unbearable breaking point, only at the very end resolving to the certainty of hope and assured connection.

Of the two roles, Ms. Saracino’s is less psychologically complex. With perfect dramatic pitch, she pouts, postures, and preaches. In the push and pull of her emotions, she both yearns for and wishes to annihilate the unfolding the relationship with Zelda. And as the play unfolds, we come to understand why. There’s no “complete physical relaxation” available in this part, but Ms. Saracino swings the verse like mad.

In the really heavy lifting that belongs to the role of Zelda, however, Ms. Randolph enters a new, exalted level of accomplishment, in her layered, nuanced portrayal of a middle-aged scientist. Words, mine at least, can’t quite capture the span of her artistry in this role, but I’ll try with these:

…of love and loss,

…of parental obligation and abandonment,

…of the evolving roles and status of women, in both evolutionary perspective and the arcs of two careers, … one paralleling the development of contemporary feminism, the other a modern woman’s coming to terms with the demands of a lover and the demands of a promising career, 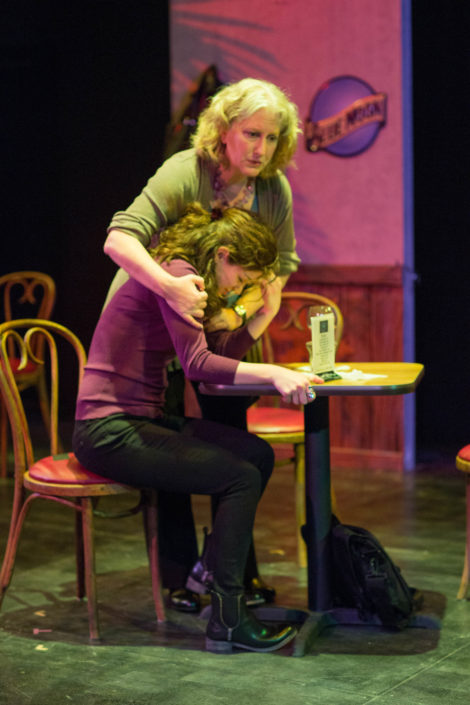 …of power, dependency, and women’s autonomy in two intimate relationships,

…explaining complex physiological and anthropological processes and conflicting scientific theories, even as her character is deeply affected by the rocketing, unfolding relationship,

… beautifully caring and mentoring, even as she struggles to comes to terms with her own mortality

… gesturing so affectingly that she bring tears to ones eyes:  e.g., the gentle stroking of the weeping young upstart’s head as she might in comforting a baby

The play and the acting are beyond the beyond, a magical tour de force. Don’t miss it!