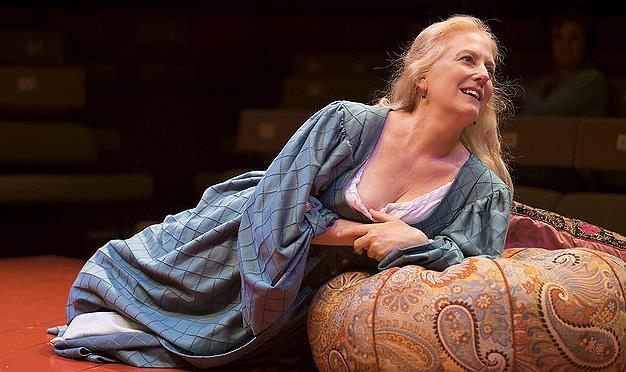 Or,
By Liz Duffy Adams
Directed by Alice Reagan

“If I can’t trust my instincts as a spy, I must trust them as a playwright.”

Aphra Behn was a prolific author in the late 1600s, penning more than 16 plays, four novels, and a large handful of shorter works including two major collections of her own poetry. In Liz Duffy Adams’ play about Behn, “Or,” now playing at Shakespeare and Company in Lenox, Massachusetts, actress Nell Gwynne pronounces the probability that Behn will be famous and her name never forgotten. How like an actress to predict the opposite of what really happened to Aphra Behn. Dead by 1689 at the age of 48, she was completely forgotten and ignored within less than 100 years, neglected until the 20th century. She was the first woman to work in literature and secure a place successful enough for her to remain unmarried and live a rather high-end life. She was also a paid spy in the mid 1660s and, when she left that career for writing she ended up temporarily in debtor’s prison in London. She is buried in Westminster Abbey, but not in Poet’s Corner; she has a place of her own near a staircase and entry into the church proper. “Or,” is a play about the year she returned to England to take up her particular cudgel: the quill pen.

Tod Randolph plays her. Tod Randolph plays only her while her fellow actors take on multiple roles in this quirky, language-troubled play. The other two actors in the play take on three roles each and they couldn’t be more different from each other. Nehassaiu deGannes plays actress Nell Gwynne, Behn’s maid Maria, and Lady Davenant. Allyn Burrows plays a Jailer; King Charles II; and William Scot, a spy-turned-traitor.

Randolph is, to be simple about it, stunning. In a play that stretches credulity in more than one way, she is the grounding stone, one that gives credence to the laying out of “facts.” If Tod Randolph says it is so, it is absolutely so. As Behn she tells us how things are, according to the playwright, and we swallow it hook, line and sinker without question. The program tells us we are in the late 1660s but, in fact, we are in the early 1670s. The Restoration (under Charles II) has been in place for more than a decade, Behn has been out of prison for at least five years and she has had two plays produced with some success before Lady Davenant and the Duke’s Company at Dorset Garden Theater has even been founded. All of these events are telescoped in this play and presented as happening within a matter of months. If it were not for the simple faith we have in this actress to tell us the truth, we would have to question this play more thoroughly, especially its language.

The playwright starts and ends the play in a semblance of rhymed couplets typical of the time, but lapses quite quickly into a standard English and then peppers the center of the play (or most of it, really) with modern clichés and anachronisms. I do not understand the purpose in this. It doesn’t convey a modernity to the work; it merely confounds us when it occurs. Historical accuracy, literal language and a few other disruptive elements threaten this play’s success from the get-go. It is a tribute to this Company’s extraordinary company of professionals that it succeeds so completely.

Oddly this is the second time I’ve seen “Or,” in the past decade, the first one in Hudson, New York, six years ago. I also worked on a production of “The Rover,” one of her greatest successes in New York City, more than 25 years ago. Shakespeare and Company is also producing a new version of Behn’s final play produced in her lifetime, “The Emperor of The Moon,” in its Rose Footprint Tent.

Back to Tod Randolph: her performance is that of a champion. Her Behn is a strong woman, often strayed from her path by the intrusion of strong men (and strong women) but never delayed long from her true purpose: the writing of works for the stage. It is clear, almost from the beginning, that lovers may come and go in her life, including lovers who wield extraordinary power, but each one will be betrayed for her one true love: writing. This is an unusual character to be sure, but Randolph has tackled women like this before in her Shakespeare and Company career, including Dorothy Thompson a few years back. She knows how to tickle our reason as she sways between the sensual and the intellectual pursuits. No one is better at this then Tod Randolph and, in this play, she succeeds again in showing us the mind as well as the body of the woman she portrays.

Nehassaiu deGannes plays three intriguing roles: Maria, Aphra Behn’s maid; the actress Nell Gwynne who became the mistress of Charles II; and Lady Davenant, a woman who owned and directed one of the principal theater companies in London during the Restoration. Lady D. was the person who rescued Behn from inferior work and pushed her toward the creation of greater pieces. From what we see in this play, it is possible that the two women also became lovers at some point.

DeGannes is quite remarkable. Her Maria is coarse in physical and verbal style and remarkably funny at the same time. Her Nell Gwynne is lovely and sweet and charming and a treat. She is playfully adolescent and singularly wise. She met Charles II in 1668, which would be one reason that this play is set in (or about) that year and her attempt to win the King was abetted by Behn. She was also a notorious cross-dresser, which is used to great effect in this play by deGannes. Her work in this role is remarkable but her short, one-scene appearance as Lady Davenant is a showstopper, receiving a well-deserved round of applause on her exit.

Similarly Allyn Burrows plays two major roles so different from one another that there is clearly a remarkable talent at work on the Lenox stage. He is everything we imagine a king in the 1600s to be: suave, sophisticated, hale, hearty and interested in domestic affairs (his own) more than in the grander aspects of ruling Britain. As he woos first one woman then another, he becomes a well-tamed animal. He is fun in the grandiose moments and heartening in the warmer, more affectionate ones.

As William Scot, a man who the British tried to woo into being a counter-spy using Agent 160 (or Aphra Behn then called Astrea) to get him over to their side, he is devilish, devil-may-care and full of rowdy intent. He plays this part with an almost madcap creativity. Burrows is terrific here as well ,and his constant entrances and exits in the play move the comedy closer and closer to classic farce.

These three actors give good theater and that is the best one can expect. As directed by Alice Reagan, they each clearly play well with others. The play itself has remarkable life, a liveliness highlighted by soft, sensitive instances under Reagan’s guiding hand. Govane Lohbauer’s costumes serve the play extremely well and Sandra Goldmark has created a set that lets two places exist around the same furniture without seeming weird. Jeanette Ol-Suk Yew provides excellent lighting and Amy Altadonna does nice things with her sound plot.

The Tina Packer Playhouse has a winner with this play. Even with the quirkiness in the writing, the Company onstage and backstage has presented a play worth watching – every moment of it. If it isn’t exactly history, it is theater, and theater is at the historical heart of the play.

Or, plays on the Tina Packer Playhouse stage at Shakespeare and Company, 70 Kemble Street, Lenox, MA through Sunday, September 4. For information and tickets, see the Berkshire Edge calendar, call the box office at (413) 637-3353, or go online to shakespeare.org.